Hi Hive friends!
Today I want to tell you about my experience in Cologne this weekend and this Monday. I think everyone spent the last few days differently, but one thing was the same: the Ukraine crisis and Russia's invasion. In this post I do not want to go too much on the political level, but rather share with you the pictures from Cologne and my impressions in these days from Cologne. I have decided this year not to celebrate carnival and therefore you see me in these pictures not dressed up, but in Cologne, nevertheless, the Rosenmontagszug took place. Or more precisely, it did not take place as usual, but was canceled with floats and camels, instead the rally was announced.
I was amazed that so many families took part and were out and about, otherwise the cityscape is more dominated by younger people (at least that's how I had always perceived it). Because of the war in Ukraine, many Shrove Monday parades were canceled, but not all. Before the Carnival celebrations were already partly criticized because of Corona, but because of the Ukraine crisis, the voices have become even more, so that the carnival was smaller than usual in previous years. The pictures you can see here are from Saturday, Sunday and today. My impression was that Saturday and Sunday were also already people who protested on the street, but today on Monday the cityscape was very marked by demonstrators who demonstrated against the war. Today alone in Cologne, according to the news, tens of thousands of carnival people had taken to the streets for peace in Ukraine. Floats and camels are out and there is no traditional carnival procession, but a peace demonstration. I must say, I have rarely seen the city center so full, I was impressed by the crowds. Here you can see pictures from Saturday and Sunday. We (a friend and I) had actually planned to go to the botanical garden in Cologne, but then stopped at a stand for churros. It´s one of my favorite snacks and so we took a medium bag with us. Here you can see the stand, the churros tasted very delicious.
As you can see, the shop is called "Frankie's Churros" - I can only recommend them. Here you can see a few more models, I think you know what they refer to. On the blue sign you can see the inscription "wrong time wrong place" and on the hat it says "Düsseldorf" - also a big city like Cologne in the Ruhr area. The peace demonstration began in the morning with a rally at which Cologne Mayor Henriette Reker also appeared. She described the demonstration as a signal "against war in Europe" and that now also rather politically uninterested people would become active. What do you think? Have you also noticed this in your environment? Until the afternoon there were probably 150,000 people and the route was about 5 km through the city center. We left by train in the morning and had to get off two stations beforehand because a very large area of the city center was closed off. According to the festival committee, the peace demonstration is by no means a carnival procession, which is why typical features of a procession such as camels, floats or carriages were dispensed with. Nevertheless, it should be a colorful and noisy parade. Before the start of the march, the committee let fly peace doves, of which I have no photo, however, because we were there too late. The traditional Rosenmontagszug should be canceled because of Corona before, but because of the Ukraine crisis also the alternative variant in the football stadium was canceled in favor of the peace demo. In many other cities in Germany like Berlin and all over the world the peace demonstrations are taking place right now. Here you can see more pictures of the peace demonstration, signs with the Ukrainian flag are being held up, as well as those of Putin and Lukashenko. I've been thinking for the last days about whether I should post this post and write about this topic, but I just wanted to show you the impressions from my city. How are your cities doing? Are there demonstrations too?
I hope I was able to show you my impressions of the last three days in Cologne and the balancing act between carnival and the demonstrations. Of course, this balancing act is not easy, because so many people are losing their homes again, have to flee, families are being torn apart.
For me it was definitely the right decision not to celebrate carnival this year - what Europe can and must do now is support - everyone can support in their own way. Whether it's praying, donating, or demonstrating. That was a different post today, but I felt I should write it.

The people doing V2K want me to believe it is this lady @battleaxe Investigate what she has been up to for 5 years. Its the next step to stopping this. Make her prove where she has been for 5 years or where she is now. She is involved deeply with @fyrstikken and his group. Her discord is Battleaxe#1003. I cant say she is the one directly doing the v2k. Make her prove it. They have tried to kill me and are still trying to kill me. I bet nobody does anything at all. Make @battleaxe prove it. I bet she wont. They want me to believe the v2k in me is being broadcasted from her location. @battleaxe what is your location? https://ecency.com/fyrstikken/@fairandbalanced/i-am-the-only-motherfucker-on-the-internet-pointing-to-a-direct-source-for-voice-to-skull-electronic-terrorism

It's good that you wrote about what was in your heart. Nice post. It's a tough situation and a lot of cities are supporting in their own way which is good. Looks like Cologne is showing its support.

yeah it has something policital and i wasnt sure if it fots to haveyoubeenhere but its about the cologne carnival too;) it really is!

Sad to see what the world is going through and what we'll have to face in the next months (inflation, etc etc).

But hey! Churros! It's been quite some time I don't have one of those. The ones you had are exactly like the ones we have here (do they even change around the world?). Fantastic street food.

thats so true, the inflation in russia is so high and i am not sure how it will be in the us and europe.. its already high.. but you know what today i have read that the ukraine turns to crypto by legalizing bitcoin thats a great sign and step in the right direction i think crypto could really help here..
yeaahh i discovered churros for myself last year and cannot get enough of it, haha then its time again;) thats cool even though i would like to know how it tastes in Brazil! it is:)

Bitcoin would give people a chance when fiats go to shit. Russian citizens, most of them, have nothing to do with their leader's madness, yet they suffer the consequences of a monetary collapse (Bitcoin solves that). It goes farther than in terms of fundamentals but I'd need to write a ginormous comment \o\

As for the churros: I've eaten churros both in Brazil and Europe; they taste the same. But here in Brazil they make them hollow and insert chocolate or doce de leite inside (I don't remember hollow churros in Europe)

Edit: The event you posted about just appeared in our national news!

haha yes you can write a lot about bitcoin and how it could help. i also have a friend who is russian and has family and friends in ukraine and russia and she also thinks that many russians don't want war.
oh chocolate from the inside also sounds very good, even if they taste the same they certainly look a bit nicer !;) 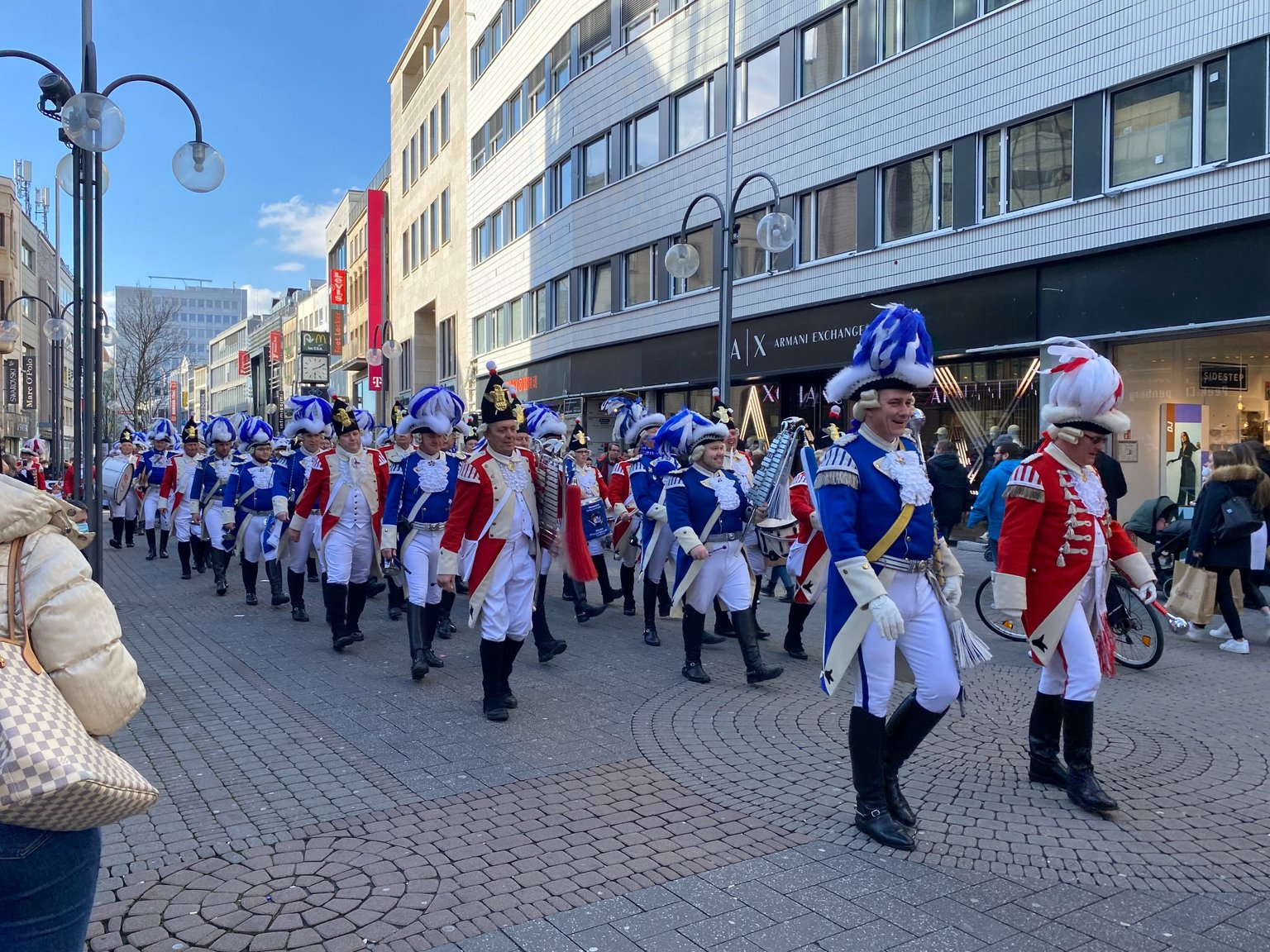 It seems that today everyone only talks about Russia and Ukraine, I don't know what to say, especially since I live relatively close to the Ukrainian border, from my county a lot of aid has left for refugees from Ukraine, the Romanian people are very supportive of the Ukrainian people.

thank you ! Haha they had a lot of fun!

Praying for worldly peace 🙏🙏💐💐🙏🙏 Love your article at this time.
Make Love Not War ✌

Think that's also one of the things we can do now. I hope that somehow it will be possible to put the guns down before more innocent people die. Thanks for looking!<3

Quite a colourful procession! I really liked the models, that's a lot of work. And the number of people is good. But I am guessing 150,000 is not the most Cologne has seen?

I also really liked the models, especially because some of them were so timely. The number was subsequently corrected even higher, I mean to 250,000, but probably some demos had even more participants. For me it was the biggest demo since I've been living here.