Cosmo with his Atom Cryptocurrency

Today there are more than 10,000 virtual currencies around the world and rising, where now more than ever the moment when cryptocurrencies or cryptocurrencies are most talked about as a real alternative to a centralized financial system and as a good safe haven For the years to come, this time we are going to analyze:

Cosmo with his Atom Cryptocurrency

The Cosmo network is a complete ecosystem made up of independent blockchain that can scale and connect with one another. This not only includes the blockchains that were built on Cosmo but also adds a number of external blockchains, such as Bitcoin and Ethereum, thus allowing anyone to connect to the network, and can communicate with each other, precisely for that reason that Cosmo masters itself as the internet of the blockchain. The same creator of Cosmo says that any blockchain can connect to Cosmo through an adapted system, maintaining control of governance while gaining interoperability with any blockchain that is part of this network. Cosmo was not designed for a particular use case, but to accommodate many different cases. The Cosmo network is a multilayer blockchain ecosystem that has the native Atom token to pay for the transactions carried out within them, just as the universe is an endless set of galaxies and planets, Cosmo is made up of a large group of blockchains. which can interact with each other, but the most interesting thing is that instead of using a lot of bridges to connect and communicate all these networks with the other, it uses a Hubs, the cosmo hubs are basically the central points to what the chain of block connects to gain interoperability with all other connected blockchains. Since instead of connecting bitcoin example with ethereum, polkadot with cardano, among others by a bridge this offers a central point where all the blockchain are connected in sets, where it achieves interoperability in an easier way and always staying connected, one with other

This project's vision is to allow developers to build a blockchain in an easy way and break the existing barriers between different chains of blocks, allowing transactions between them quickly and safely, decentralized without losing sovereignty, thanks to Tendremit, Cosmo SDK, IBC (inter-Blockchain-Communication protocol), tools designed to allow people to create decentralized, personalized, scalable applications in a secure and easy way.

What does Cosmo offer?

This offers solutions to the problems of scalability, usability, sovereignty, of the blockchain, knowing that previously in the old projects scalability was a great inconvenience due to the few transactions that a Proof-of-work blockchain could process at the same time, To give blockchains scalability, it was to fork the code or start building on it. Cosmo allows developers their own individual blockchains, with their own governance structures allowing also to interact and transact with each other, in this way it becomes the authentic internet of the blockchain and this is achieved through a modular structure, to which They call Hubs and Zones, which allow different blockchains to exchange tokens with each other. This is one of the highlights of the Cosmo project.

This is a governance cryptocurrency that we can vote on within the network, in turn it is a Proof-of-stake currency which means that we can easily delegate our token through a rewards validator in value form to earn annual returns on our investment. As long as Atom we have more Atom in Staking we will obtain rewards, when staking our tokens are blocked, to leave them we must wait 21 days to be able to withdraw our token. This for a short-term investor is not flashy, it has an annual yield of between 9 or 10%, which is very striking for long-term holding in a staking way. 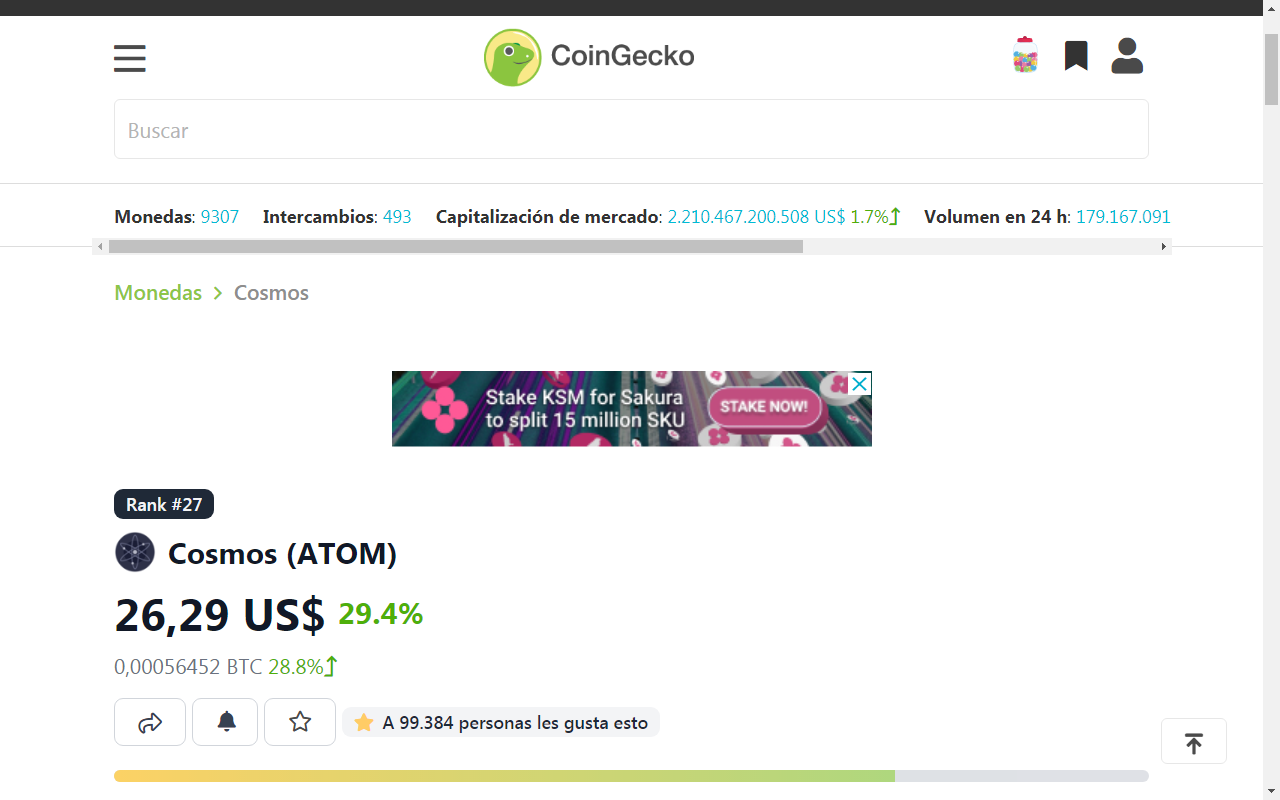