Book Review: The Death Of Money by James Rickards 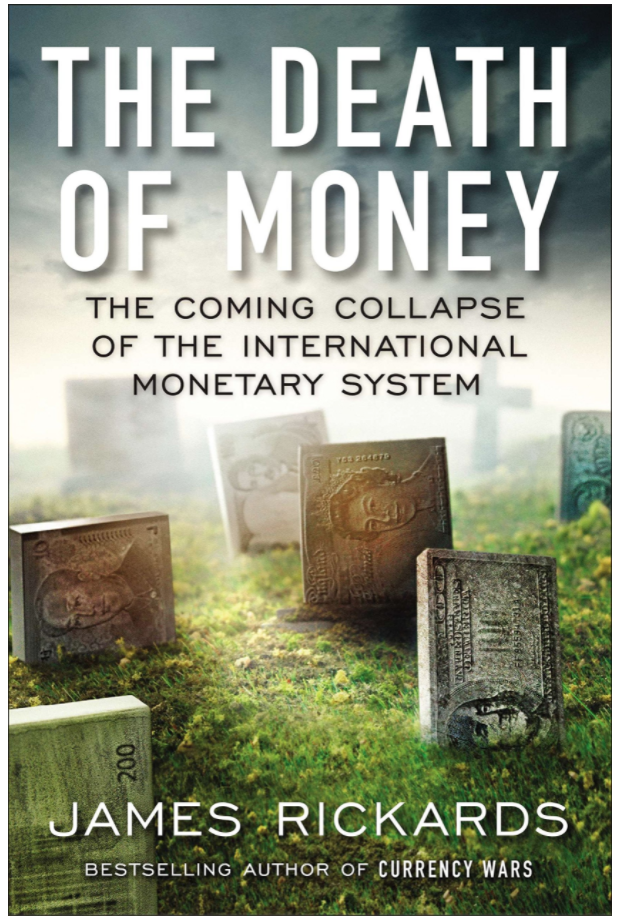 I've read quite few books that are pessimistic regarding the international monetary system, and The Death Of Money by James Rickards is no exception. Rickards has a unique perspective since he used to work for the CIA with the goal of helping defend the United States from 'Financial Terrorism'. This includes people trading on insider information regarding an imminent terrorist attack, such as shorting the airlines prior to 9/11. The book was written in 2014, so I wasn't expecting to see anything about Bitcoin or digital currencies. To my surprise he did include the following paragraph:

...the rise of alternative currencies and of virtual or digital currencies such as bitcoin. Digital currencies exist within private peer-to-peer computer networks and are not issued by or supported by any government or central bank. The bitcoin phenomenon began in 2008 with the pseudonymous publication of a paper (by Satoshi Nakamoto) describing the protocols for the creation of a new electronic digital currency. In January 2009 the first bitcoins were created by Nakamoto's software. He continued making technical contributions to the bitcoin project until 2010, at which point he withdrew from active participation. However by that time a large community of developers, libertarians, and entrepreneurs had taken up the project. By late 2013, over 11.5 million bitcoins were in circulation, with the number growing steadily. The value of each bitcoin fluctuates based on supply and demand, but it had exceeded $700 per bitcoin in November 2013. Bitcoin's long-term viability as a virtual currency remains to be seen, but its rapid and widespread adoption can already be taken as a sign that communities around the world are seeking alternatives to the dollar and traditional fiat currencies.

I found it curious that the name Bitcoin was never capitalized in his passage. I'm not sure if that was intentional or not. In any case he was very neutral in his presentation of Bitcoin. This is understandable since Bitcoin was still very young in 2014, and Rickards is an unabashed gold bug, having later written The New Case For Gold in 2016. Rickards was much less kind to Bitcoin in this April 2021 video:

As a proponent of gold, it makes sense that he would get aggressive about bashing Bitcoin, much like his contemporary Peter Schiff. Granted, I do have more respect for Rickards' opinion. But his claim in this video the only benefit of it versus gold is 'it goes up in price' displays either willful ignorance or an active attempt to obfuscate its clear benefits.

Anyhow, the main thrust of the book I do agree with. That is, the international fiat monetary system is slowly dying. I do agree, given the way that central banks (particularly Russia and China) have been accumulating gold, it would be naive to say that gold would not be a part of the future monetary reset. I just happen to believe that Bitcoin and other digital currencies will be part of the future as well. Still, I thought the book was a fascinating read, especially regarding the history of international finance from World War II until the collapse in 2008. Eight years later, all signs indicate we continue to march on towards the failure of fiat currencies and a monetary reset. His suggestions to protect yourself include buying gold, land, and holding cash. I fully agree with this, but add Bitcoin and cryptocurrencies to the mix.

I agree 100% with the conclusion to buy gold, land, crypto and hold cash. I would add to that to make sure you always hold a few months of expenses worth of PHYSICAL cash too! It is essential that you have cash outside of the banking system in case of emergency, being blindsided by a divorce, being falsely accused of something, etc.

There is another great book you may appreciate called "The War On Cash", that discusses why physical currency is important, and how to fight against the cash bans and restrictions. Cash is convenient, feeless, and is privacy preserving, all should have some alongside their gold and crypto hardware wallets in their safes.

I would add to that to make sure you always hold a few months of expenses worth of PHYSICAL cash too!

There is another great book you may appreciate called "The War On Cash"...