Dragon Warrior For The NES 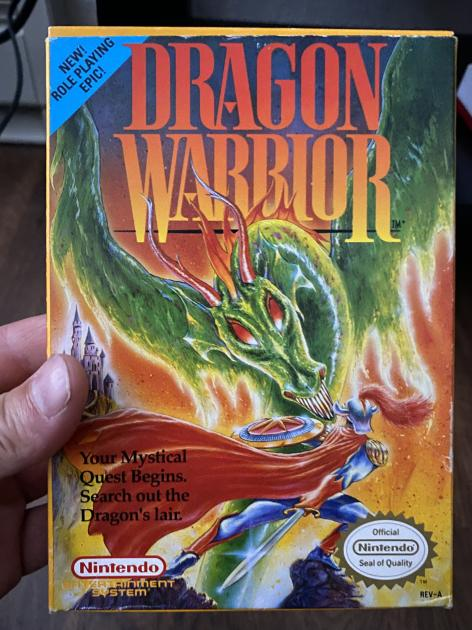 What's up game nerds? It has been a minute since my last game update. I finally got around to playing one of the games in my NES library that I have not played yet. The game is Dragon Warrior. I actually would of sold this already, but I have had a hard time letting it go since the box is in near perfect condition. Not to mention the art is pretty bad ass! I have never really got into role playing games. Ill be honest, there is really only a handful of video games I have ever played for long periods of times. Tiger Woods Gold, Tony Hawk, basketball games, and of course Mario Bros. Also I did play a lot of Zelda. Which this game did remind me of a little. My copy of Dragon Warrior is missing the manual(bummer!), but has a Nintendo Power insert. Lets take a look.... A tip for Super Mario Bros 3. How cool is that. I could imagine what is was like to open this up back then to have your mind blown! How could anyone who had a NES pass up a subscription to Nintendo Power? Unleash the beast to being the coolest kid on the block! Just like this kid, or grown ass man? Is this what was to become after playing to much NES? Ok I got caught up with that cool insert, and forgot I am giving you all my thoughts on Dragon Warrior. I have to say playing on a modern TV has a different feel. To get the real experience of NES you really need a CRT. I have access to one, but not sure if I really want to go through all that trouble. Do you prefer to play the old games on a CRT? Let me know in the comments. Ok so this is very convenient. Some of these games with text are just so annoying, and take to long. I just want to hurry, and play the damn game! Am I right? I know in role playing games you need to actually pay attention. So being able to choose the speed of the text is a very cool option. You play as a Viking looking dude, and walk around looking for clues. This is where I thought of Zelda. So as your walking around to village to village you randomly come in contact with different enemies, and you can choose to fight, run. As you progress in the game you get different items to use. The sound effects are pretty cool, and it makes it fell more exciting. But being the first time ever playing this game, or really any role playing game for that matter. was clueless on how to go about it, and died real quick. This game has a challenge to it making it great to play. I can not wait to show this, and play with my boys.

So what is the value of this retro game? Did you ever play this, or any of the Dragon Warrior games? Please let me know in the comments on your thoughts. Did it suck? Was it amazing? I look foreword to hearing what anyone has to say, good or bad! Also what is your favorite role playing game?

Perfect post man. These old games... They are still good, I've never played this one. But wish to play. It looks like a masterpice for old years.

Out of all the shitty games, this one is a gem in the rough. :)

I never played dragon warrior but played some NES, what a treat seeing such an old game played on it's original console. Cheers !PIZZA

Thank you, and technically I am not using the original NES, but a remake of one that plays the original cartridges. It is called a Retron. :)

Still though, original cartridge. nice to see man. I'll have to look into this "Retron" neat lil device. !PIZZA

Yeah I love having the physical cartridge. I never would of started playing these games if I hadn’t come across them.

The retron is pretty cool, they also make ones for the SNES, sega, even Atari. Some read te cartridge, and down load the games memory onto RAM. Mine plays it directly. And it cost 30$, vs how much you would have to pay for an original, and remember how finicky they where? Unless you find a the NES top loader, but that can cost up to 250$ these days!

I didnt think that I had played this game, but when I saw the screenshots, I remember trying it out. I think I was a little too young when it first came out to really appreciate the RPG games. But my older brother played this one.

Role playing games are a bit different, and it has been hard for me to really get into them. But after playing some shitty games for the NES, I can really appreciate this one

The RPGs back on the NES were pretty bad. The technology was really limited and they could not do any of the cool stuff that was introduced on the SNES and the systems after that.

Oh yeah 100%. But as I was reading up on this game on Wiki, some aspects of the game play was actually brought to SNES RP games even though the technology has improved.

It is pretty cool looking back at these games to see the influences on the evolution of gaming.

I got to play this game on many occasions, it was very cool for the time, very similar to Final Fantasy, besides being a great game it has a great hisotory of which we would never get bored of it, good to see someone make a post about it, this game should not be forgotten.

That’s true. This game did set a standard for role playing games!

This game took up so much of my time as a kid and I think this title in particular kind of roped me into becoming a lifelong RPG fan. Even by the 80's standards the graphics were pretty average but it didn't matter because the story and the balance was just so perfect. I don't think I would go back to play it again because I fear I would ruin my awesome memories of hours upon hours being dedicated to playing it. I'll just leave it in my memories.

I look foreword to hearing what anyone has to say, good or bad! Also what is your favorite role playing game?

That's always a tough question to answer but I would say that it is a toss up between this game, Phantasy Star 2 and FF3

Awesome comment! I have to agree with your sentiment. I remember Excite bike being so awesome, and when I played it recently I was thinking what was I thinking! Lol

lol. It is true with so many "oh I loved that game!" experiences. I have gone back to play a beloved childhood game on many occasions and almost immediately regretted it. This is especially true with the timed random encounters in almost all RPG's back in the day. This is rarely used in RPG's anymore and there's a very good reason for that: It's annoying.

I loved excitebike as well but it's definitely one of those that I think it best left in my mind :)

Man, this one brings back memories. I remember buying this at a local general store (like K-Mart but regional) that sold video games. It was $5 more than other titles which meant I had to save up another week's allowance to afford it (that was a torturous week for pre-teen).

When I got it home, I staid up late playing and it was an amazing experience. I had no strategy guides or anything to help so it was trial and error to figure things out. This was my first console role-playing game, previously I had played games like Alternate Reality: The Dungeon and Might & Magic.

Thanks for the memories on this one.

That’s so cool to hear! I remember going to toys r us dreaming of getting ganes. Then going to blockbuster to rent one for the weekend. Sadly I never played a game like this until a few months ago! Which was Earthbound. Thanks for sharing this:)

I got very lucky. Actually found a box with 60 games, and over half of them where in the original boxes