Evmos has had a glitchy and problematic launch. The initial launch was aborted after a few days, with the chain halting and an upgrade failing. There was also issues with claiming the airdrop, and just a UX that left much to be desired. During an extended outage, the team worked on improvements and got the chain sorted out better, and it relaunched a few weeks ago. 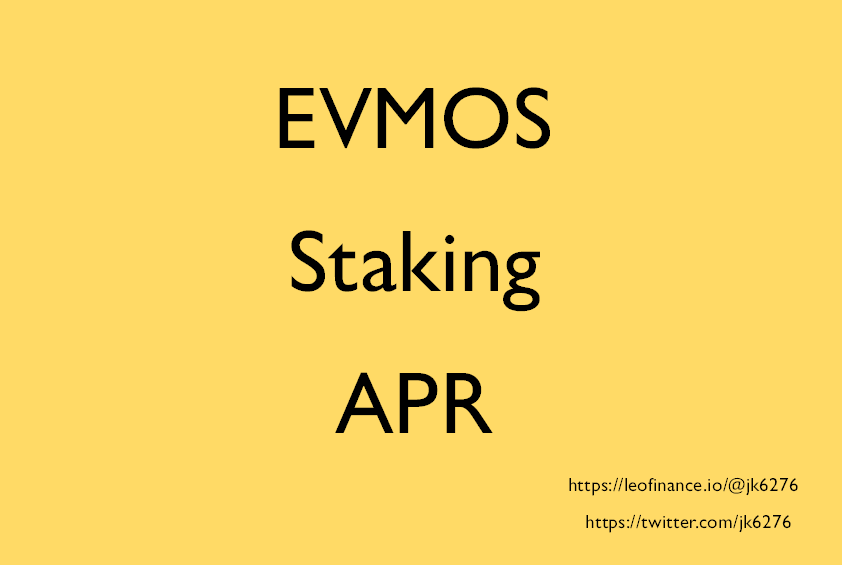 The Inflation rewards for staked EVMOS have recently been activated. With high token emissions, and a low rate of staking currently, the APR is huge. The first two days of returns for staking EVMOS have been well over 1000% APR. Up until the start of token emissions, the use cases for EVMOS in the first few weeks since relaunch have been focused on its place in Dex's built on EVMOS, and as Gas for transactions.

The start of inflation and the enormous early APR has seen a scramble for EVMOS tokens, and the price has surged in the last couple of days. EVMOS has pushed quickly in to the top 100 by market cap on Coingecko, and with its token hovering around $3 means its market cap is around $600 million. Indeed, the last couple of days for EVMOS have been a real bright spot for weary Cosmonauts, who have endured months of declines across the board, and the recent demise of LUNA and UST being the icing on a very nasty cake.

The big question for EVMOS is: will it's price performance look like OSMO, or some other Cosmos airdrop assets like STARS as just one example. 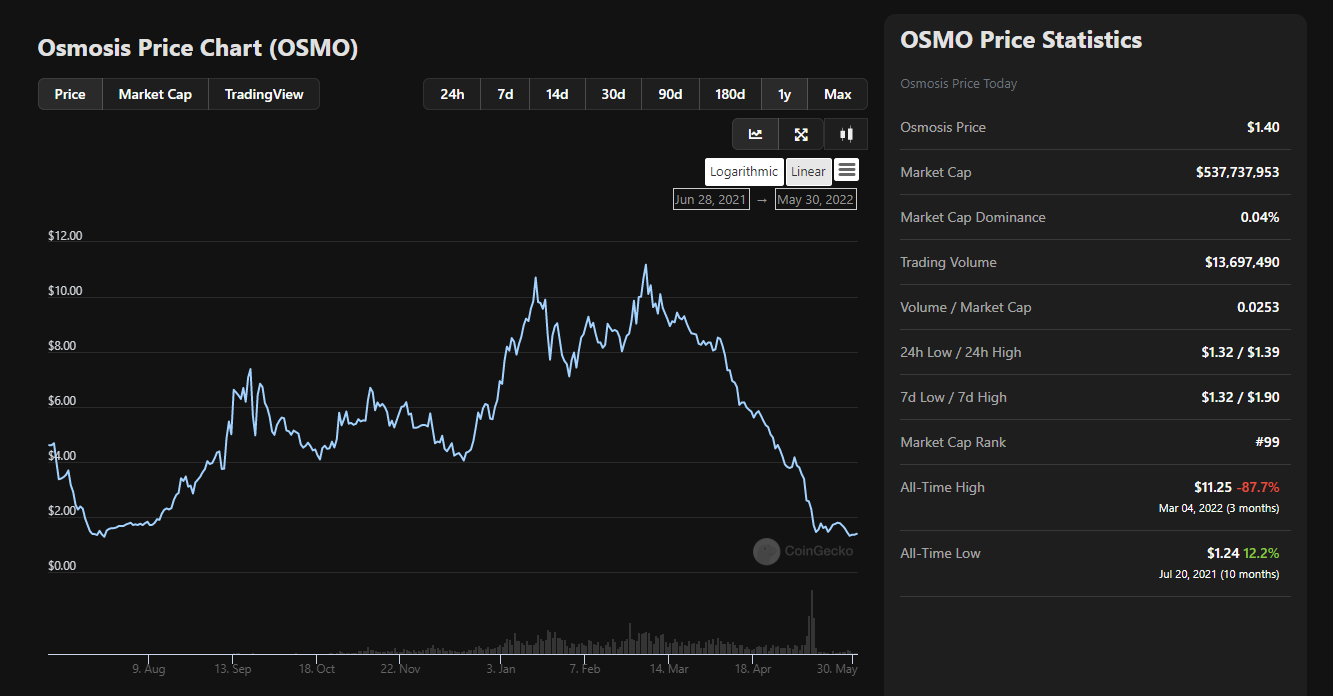 So, for OSMO there was an extended period where high staking rewards were absorbed for quite a while by use case, as a key coin for Liquidity mining on the platform. Eventually, the price faded from its $10 high during the recent market drops, to its current price around $1.40. 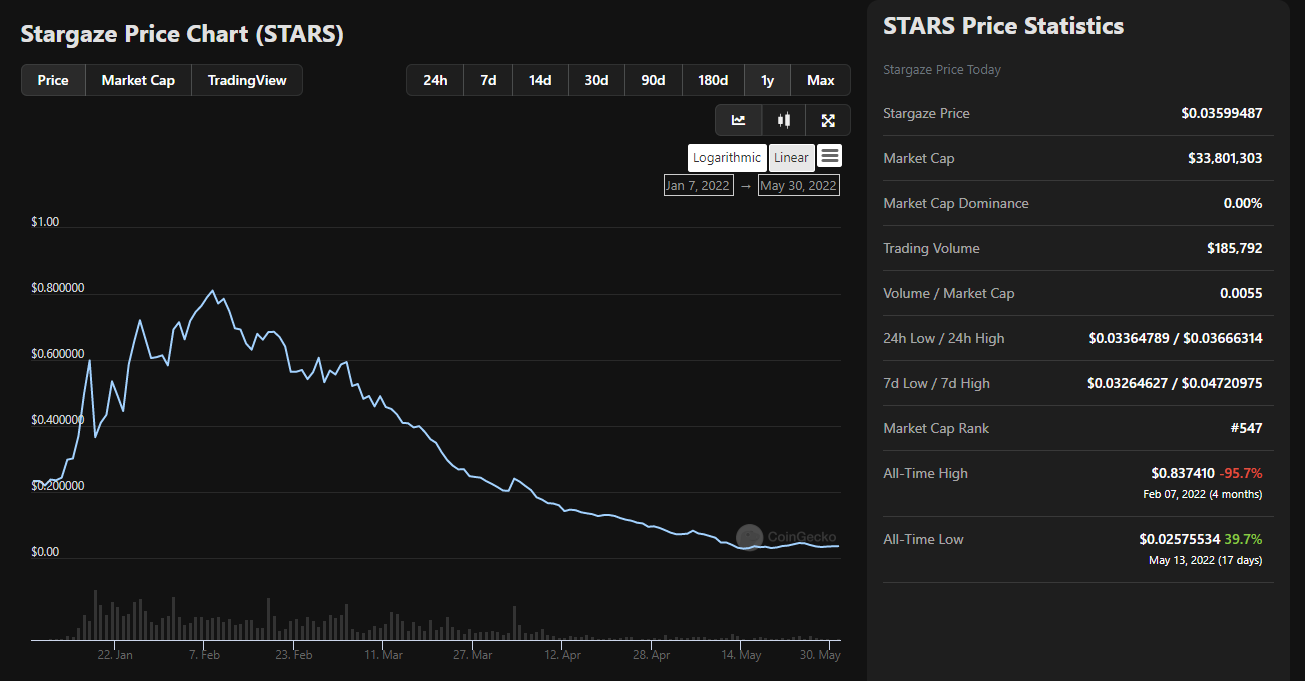 Here is the chart for STARS - the token for the Stargaze NFT chain. This pattern is repeated across many of the Cosmos eco-system projects that launched late last year or early this year. It started off well, price rose for a bit while staking rewards were huge. Then the decline set in as people waited for the main products to launch, and sold those high staking rewards into other tokens. This pattern repeats over and over for similar projects.

Personally, I think EVMOS may do well for a while. There are more ways to use it, right from the start. People will be buying to chase the crazy APR, and the rewards will decline as more and more supply gets staked. But EVMOS will also be in demand for LPing, primarily in the Dex's built on it, but also in other Cosmos Dex's like Osmosis. The market is also in a different phase than when many of the other Cosmos chains launched.

It will be interesting to see how it goes over the next few weeks. I'm expecting it to be strong for a couple weeks, and then decline for a while till it finds its balance between staking APR, and LP demand.

So far, the airdrop still has issues. Usage varies between those coming from Cosmos, and Ethereum users. Being an EVM, Metamask is the primary way of interacting with Evmos. The primary Dex so far seems to be Diffusion, a clone of Uniswap V2. There is also Cronus available. Many more projects are starting up, or branching out.

To use the EVM requires an Ethereum wallet like Metamask, causing complications for Keplr users from the Cosmos eco-system. Claiming the airdrop at Evmos - mission control requires importing your claim to Metamask. Those of us that used a work around to claim via Keplr during the first aborted launch of EVMOS are having issues with this. I still have no idea how to claim the last 25% of mine for example. Not sure of how to stake using Metamask either, although I have not looked to be honest, as I had mine staked on Keplr.

The UX is clunky, and certainly not smooth sailing yet. The project is ambitious, but has a relatively small team behind it as I understand things. Building an EVM, with seamless link to the Cosmos via IBC will be a fantastic outcome. For now I have EVMOS that I claimed earlier staked. Personally, while the price is good, and staking rewards are crazy, I am using those rewards to rebuild some other positions on Osmosis. I've had a play with Diffusion, and it works fine. But I've seen too many Cosmos projects launch with lots of hype, and then decline for the next 6 months. The chart for STARS is repeated by so many similar tokens.

Short term, I'm selling staking rewards. Once the decline in price has kicked in, then I'll probably swap to staking/accumulating to build up a position for the next bull market. I'm not loving the UX, and still trying to figure out stuff. But I am very hopefully that it succeeds as it feels like an important addition to the Cosmos.

Have you checked if you are getting the airdrop yet? Free money and an insane 100% + APR is worth a look. Let me know your experience in the comments below.

I got some airdrop here as well .... pooled it on diffusion on evmos-usdc

Nice. Diffusion looks pretty smooth. It will probably be my preferred Dex on EVMOS I think.

Glad you picked up some.

Got some LP on that too :-). I have got even the DIFF token (and staking for xDiff) and looking forward to DIFF airdrop :-) (for Juno & EVMOS stakers and LP on osmosis). Same with Cronus.

I think EVMOS will spawn a range of new airdrops over the coming months. Will be interesting to see how they all play out, and which Dex's and protocols gain traction.

Your support would be really helpful and you could make a difference.
Thank you!

EVMOS is the best... for now. But this APR is fantastic and because of some glitches about the airdrop not all eligible would get EVMOS airdrop in full size (good for stakers - me :-)).
For me it is a projet with 2 great things - finished number of tokens after 4 years (1 mld) and staking rewards. I got my EVMOS for free so I will wait, compound every day with disperze validator. I selled my first four days staking rewards for some other crypto projects (CUB, POLYCUB, RAGNAROK) and now I can wait with some EVMOS staked.

PS: You can not compare EVMOS with OSMO rather JUNO... I think OSMO is like RAW in JUNO network.

The staking APR is crazy. One thing to keep in mind is that the community fund is not staked. If they do stake it, to add security to the network, it will drop the APR lots. Make the most of the returns while they last.

As to OSMO = RAW, yes and no. There are more things coming to Osmosis that will add to its benefits. I like the superfluid staking, that's a fairly unique offer. My big worry with Junoswap is the risk of rugs, with everything on JUNO being permissionless.

Each (EVMOS, OSMO, JUNO, RAW) play a different role, and it will be interesting to see how they all go in the long run.

JK, any way to move EVMOS tokens from Metamask to Cosmos? I see no way to use IBC and couldn't claim them on EVMOS on Cosmos for whatever reason. I used import instead and they landed in Metamask (only about a quarter of them; maybe Ethereum fees?). I used app.evmos.org. Wanted to stake them, but I don't see a way to do it. They don't show in Mission Control after importing, only in Metamask.

I don't know, tbh. I'm still not able to claim 25% of my airdrop for Cosmos. I have not tried to stake with tokens on Metamask, so I can't help there. Once I can claim my last airdrop.

The hassles of having EVMOS in Keplr, and interacting with the EVM through Metamask is painful.

Would be delighted if KEPLR developed into a Metamask alternative and was able to do it all, but I'm not sure if that is coming.

Yeah, I guess it's a waiting game until something is developed further.

I tried out Diffusion and Cronos. They're fine and I like the idea of EVMOS (EVM compatible connections to IBC, wow!) but I haven't seen any use of it that blows my mind yet.

I'm looking forward to seeing what people think of and build over the next few months!

Yeah, so far it is just another EVM. I guess the unique offerings will appear over the coming months.

Same, looking forward to seeing how it all develops and what points of difference emerge to make EVMOS more unique.

It will get interesting as people start building protocols that leverage the power of an EVM connected to IBC.