@hotsauceislethal 65
about 1 month ago (Edited)
Splinterlands 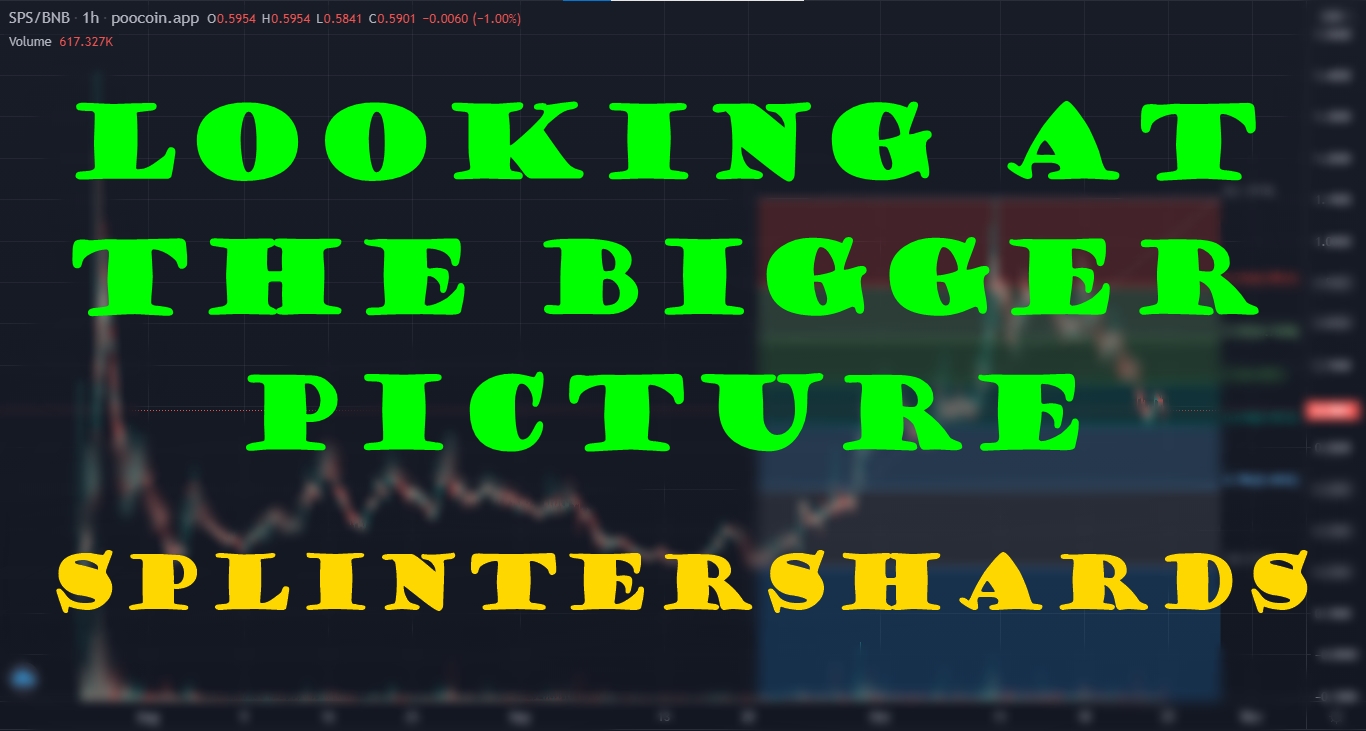 The last few weeks have been quite the rollercoaster ride for Splinterlands players! We saw the launch of the new VOUCHER system on the 18th which caused quite the frenzy in buying SPS tokens for staking. I traced multiple large front-running bots help push the price all the way to $1.10 per token before it quickly sold off that day. There were also several large holders that cashed out their entire SPS holdings from the last month of accumulation.

With the expectations of VOUCHER prices and rate of returns for staking SPS being less of an unknown, the prices of SPS have begun to come back down to earth. Many players have begun to unstake their tokens since the prices have fallen- meanwhile the whales are cashing out their large positions they held as liquid SPS or are getting from the daily airdrops. At these prices I am personally just pooling my DEC:SPS for double points so I can accumulate more SPS. 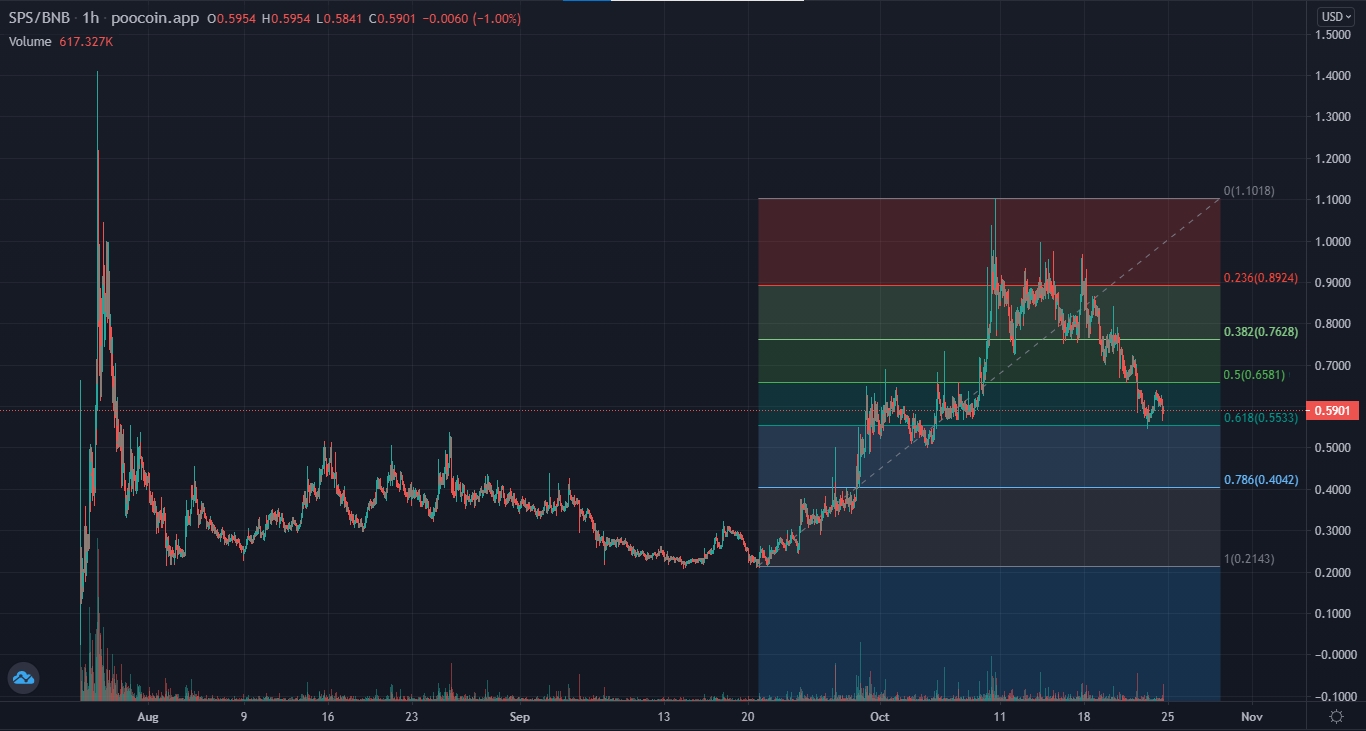 Now I am a firm believer in Fibonacci retracement for technical analysis for several reasons. Mainly because there are certain psychological buy and sell zones that attract the human eye and rational mind. Getting something at a 60% discount from the "full price" for example at a store attracts a lot more buyers than say 20% or 30% off. There are also major accumulation zones that correspond closely to these different Fib levels created by charting the base of the move to the peak. Now this isnt a precise science nor is it fortune-telling so this is to be used as a GUIDE in addition to other tools, indicators and external information.

Each of the major Fibonacci retracement levels held some sort of support on the way back down before eventually giving way to the sellers... up until the Golden Retracement level of 0.618 which posed the most buyer support so far. 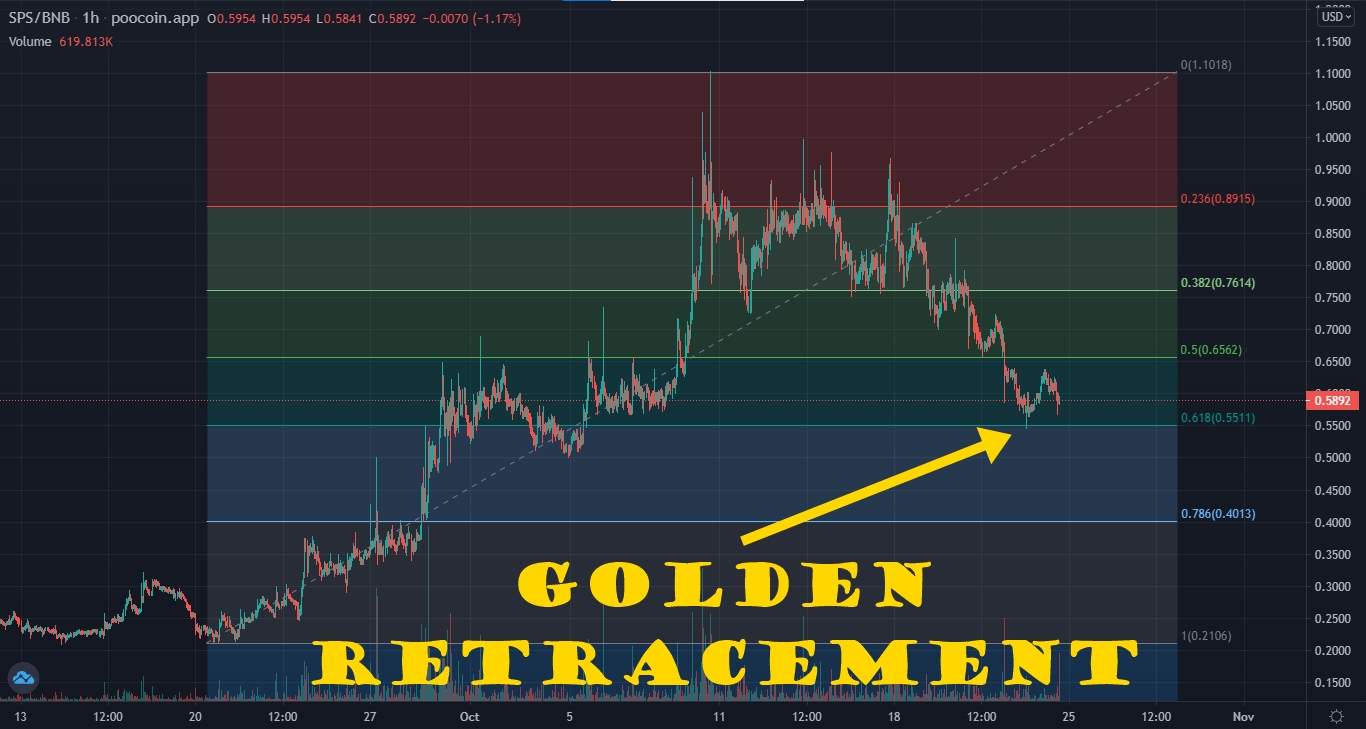 Should this 55 cent support zone break down we are looking at 40c as the next hard line of support. Below that we would be facing 21c as the ultimate floor where whales would most definitely begin accumulation en masse. If these levels were to be reached it would take quite some time and probably be the result of temporary price manipulation by the larger holders.

There was a major accumulation range between 20c and 43c for the two months prior to the breakout in SPS prices so these psychological levels will remain major buying areas.

This is not financial advice and I am not a financial advisor. This information is for educational and entertainment purposes only.

This looks good. I'm wondering if SPS might drop further when CL no longer needs vouchers.

VOUCHERs are here to stay! I bet they use them forever and ever.

I think by that time they will have developed some of the governance use case out first. They can even do it right now using snapshot.org and using people's wallet balances but that would restrict them to one chain like BSC for example.

What I would be really curious to see is how much SPS, DEC and credits are being used to buy packs. That's going to play a big factor in the price of DEC and SPS

Anyone with common sense would just sell their DEC for SPS at the time of purchase to get an additional 10% discount on the price so it could have more selling pressure on the DEC side of things when people decide to use SPS mainly to buy packs.

@infinitytcg 44
about 1 month ago (Edited)

I can't see it going the Bear case unless spinterlands really drops the ball TREMENDOUSLY I'm not currently vested into sps as I am waiting for an entry point as I just got in this month and still learning and absorbing the market.

I think in terms of a neutral case we will see multiple levels where it finds a "new defined" medium like up downs with several plateau effects by end of year due to most people are followers and not market movers...

As in term of bull case I can see a short pullback due to this enormous selling volume due to the timing mechanism(i.e. above where I talk about plateaus it will be a weekly effect following big whale movement so noticing the first big trend in a 7 day case is key moving forward so 7 days from that last whale sellout to see if it is timed thing or a market condition decision), but because of staked sps tournaments, sps interest apr, and sps utility in farming vouchers I still think SPS will be long term play.

What I would like to see is for them to create application as promised outside of pack redemption i.e. if you own 10-15 you get into a daily lotto/airdrop system or a tournament entry for having a set amount or using as payment

With well over 35 million MTG players in the world we have a lot of room for growth. They need to change the dynamics of the game play to make it more interactive though- something I have always said. If they introduce that RPG element like I have said before then things will really begin to get interesting around here.

Why stop there? This can be singlehandely the most disruptive Card game on the market through awareness and just more marketing ramps. Hearthstone has over 100mil players world wide and no where as complex as this game yet simple all at the same time.

I think they hit the perfect niche as people dont have as much time so even corporate individuals once exposed to this can cause quite the boom.

Of course they got to introduce more Waifu cards as well as there is a market for those also and will draw in those category of collectors lol.

Also I think as an ingenius action step remember what i told you about open tournments where you can get access to all cards or at least they can try for say bronze, novice, or silver league and all they have to do is offer a booster box of either yugioh, magic, or pokemon of the winners choice and they can even use that as a marketing tool to literally target the perfect audience for them who are already willing to invest in cards, understand the rental economy, but most importantly will appreciate all the little nuances like the ability to rent cards for passive income and all the tools they have to use like peakmonsters which will give them a tcgplayer type of effect.

I think it's important to consider the effect this will have on Airdrops. Currently, at a decently high SPS rate (c.0.60) it is very lucrative for people to either hold DEC or use liquidity pools to divide their assets. If SPS continued to decline, it would be less enticing for people to hold DEC since the net value of their airdrop is significantly lower in USD.

With my calculations I'm making around 270% APR just holding DEC to get the SPS airdrops (the splintercards tool underestimates at 200%). If SPS were to drop in half, theoretically I would still be getting 135% APR at least... so yes the price could drop much lower and this would cause less demand to hold DEC, but even at those prices it would still be extremely profitable.