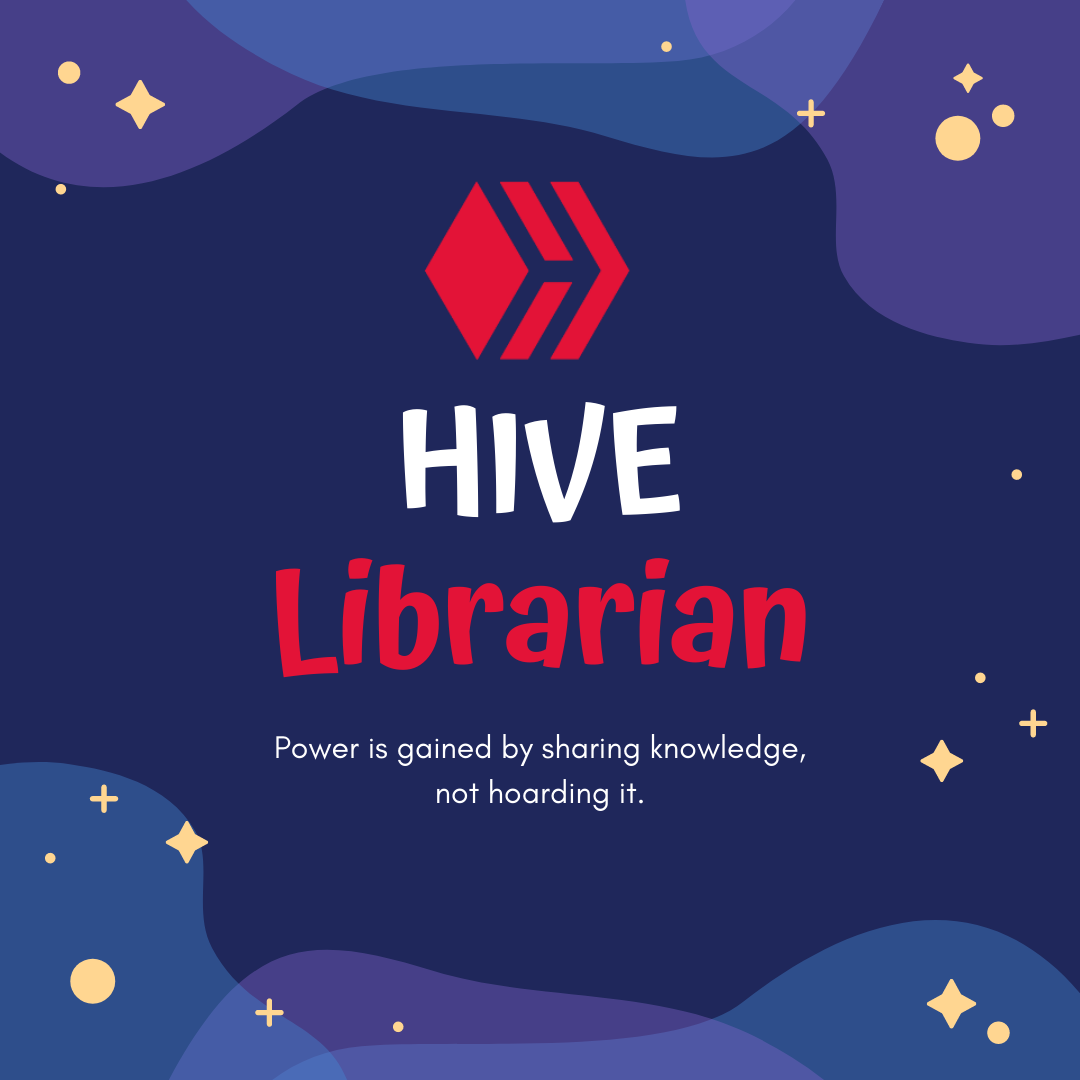 It was great to see a lot of engagement in the post I wrote yesterday on the topic of Are Hive Reward Taxable Events. There was a lot information shared and interesting discussions in the comments. One of the interesting top comments was by @travelwritemoney, who described how certain rewards can be considered as taxable income as a counterargument. But also expressed how collecting this data may not be such an easy task if done manually.

All of the data is stored in the blockchain. There are also tools like HiveSQL that allows getting Hive blockchain data with few lines of SQL code. So I had to try. After a very busy day, I was motivated enough to dedicated few hours to some coding and add a new feature to Hive Librarian App - Hive Rewards. I just finished coding and deploying the updates. I can't guarantee it will be fully functional and all of the data will be accurate. I would recommend comparing the data manually before using any of it. The purpose of this was just to demonstrate it is possible to automate the process of collecting rewards data from Hive blockchain.

I used HiveSQL and hope to share the code in a near future if anyone is interested to get the data directly from HiveSQL. Since there aren't many HiveSQL users, I thought it would be better to add the feature to Hive Librarian. If you haven't used this app yet, you can do so by visiting the following link:

Click the Hive Rewards checkbox and it will show more input fields and buttons. You can choose the start and end dates for the needed data, account name, and how you would like the results ordered. While it is possible to get all rewards with a click of one button. I thought it could more useful if each reward type had its own button. We can get data for the following rewards:

All values are in respective assets. The results will also display the dates for each reward payment. While I could have added a download as csv option, I intentionally didn't. I don't fully understand security measures for such situations, so I wouldn't want to ask anybody to download anything from this app. However, since results are displayed in a table format, they can easily be selected, copied and pasted to a spreadsheet. I tried and it worked just fine.

Give it a try, see if it works. If you find any errors please let me know in the comments or elsewhere. If you have suggestions to improve, feel free to share in the comments. Hive Librarian has other useful features too. If this is first time you are using it, feel free to try other features as well. Thank you.

Wow that's really interesting and I can see how much they are working on trying to tax the common people.

Well it's time that we hold our leaders accountable.

They're upset because cryptocurrency went from something that people laugh at to being a really serious large amount of finance.

I really like where I'm at and all of my amazing cryptocurrency friends so thank you very much for your amazing content and I really can't wait to see even more content from you in the future.

This is awesome and a wonderful idea for the blockchain. Thanks for updating informative stuffs like this

For me Hive rewards are taxable income. I just add it to my annual income statement. There is a CGT component if I hold when I sell if less than 12 months 50% if more 25% but if I instantly sell 0%

Well I do think you can figure out things based on HBD and HP but I think prices change fast. So this doesn't really solve the issue of what price HIVE should be on your tax returns. Either way, I think taxes on when you cash out for fiat seems like the easier way.

I checked it up and I was on the site for over 30 minutes before coming back to this post.

The tool is really nice. I looked up the rich list and I discovered a few things.

Will check it out fully later

Awesome! I am really glad you found it useful.

I didn't know this app, thanks. Can we have all the datas of five items you meantioned since the membership?

I know i should just click the link but i can't help asking to fully understand it. I can be really daft sometimes. What exactly is the Hive Library? What does it do? Is it like another front end ?

It is a simple App that provides interesting data from the Hive blockchain. No, it is not another front end. But you can get some historical information you wouldn't easily be able to find elsewhere.

Amazing Hive tool, thanks for sharing! With it, we can spot some really cool stats and maybe even get us motivated to do more!

I remember using an early version of this. It's a great app. We need to have some place to showcase all these great HIVE related websites like this. https://hivedapps.com and https://hiveprojects.io are great. But we can do better with something that will help beginners to discover more about HIVE.
!PIZZA
!LUV

That is very true. But not easy to accomplish.

@geekgirl can i get your discord id please

I've used the Librarian apps a bunch of times, I think it's a great tool !

This is very a wonderful and amazing idea for the Blockchain. Thanks for the info

@geekgirl I check hivelibrarian website, It is Awesome. There are many information in this website especially get information about Reward is great.
Thanks for sharing because i don't know about it. I first read about it.

It's great to know you found it useful. Thank you. Feel free to let me know if you see any errors/issues.

@geekgirl
https://ecency.com/hive-153850/@ziabutt3836/hive-librarian-app-or-or
I Post a presentation on Hive Librarian App. Your Remarks on this post is a great motivation for me. Thanks

Thank you so much for creating this tool. You are a true geek of the noblest kind.

If I had to do this manually for my accounts, it would be a total of 15,835 transactions. Hive.blog only gives you 2 months and Peakd has an aneurysm pulling up that old data.

If I may make a suggestion, the time stamps are in different formats for each reward type. I think the more universal format for crypto tax websites is YYYY/MM/DD HH:MM:SS

I am much better off today than I was yesterday thanks to your work.

Hi @travelwritemoney! I am glad you liked the tool. Thanks for the feedback, I will try to fix it later. As a temporary solution for timestamp formats, they can be fixed in excel. If you are transferring them to a spreadsheet, there is an easy way to make all timestamps have the same format.

That's a good information. I really like the write up.

It's very useful and run fast. Now I can keep a track of everything I do and Measure better. Thanks a lot.

very interesting tool. Thanks for showing me. I will have to play around with it and get used to what it can do. :)

Did you play poker on steem some years ago?

Very nice tool! I didn't know it before. tyvm !!!
It goes so fast, no matter which period of time I enter. I don't know any other tool that can find such old transactions on the blockchain within ~3 seconds! Great work 💙!
Actually I should use it to answer me the question myself 😉

Yes, I played poker. There is still Hive Poker League.
Thank you.

Then my brain didn't let me down. We often sat at the same table.
I was playing as mairosoft at that time.

On Hive, most of the tournaments get cancelled because the minimum number of entrants isn't reached.
It's really a shame! It was a very nice community!

I know you very well as a poker player, scary one to play against. :)

Yes, many old players don’t play anymore including myself. I just don’t have time. But will need to play more often. It is great community indeed. We still hang out at Tuck’s room.

By the way. Your wallet tells me, you made a very good job over the time.

I don’t sell lol, but most importantly enjoy being on Hive and have invested as well.

WOW I was going to ask if you still planned on making this! This is great help. The only other thing I could ask for is a display of how much the hive was worth during a particular time and calculate gains or losses from now, cause as of right now we are expected to report such, though with the recent news coming out next year it might be a whole lot easier in the US :-)

Great tool I was trying to explain hive to a tax account and they could not understand how to even handle transactions. This year should be fun…