About a month ago (how time flies!), I wrote a post about Cosmos Hub, Osmosis and specifically, how one could earn a much higher APR on their CRO tokens than on crypto.com. One month later, the APR is still strong for the CRO-OSMO pool, into the 3 digits area.

On the same post I remarked Cosmos Hub didn't have a stable coin, either native or on a blockchain interlinked with its ecosystem. Yet...

This morning I read a post about Terra ecosystem and its stable coin UST. Yes, it's UST (ticker of TerraUSD), not USDT, the stable coin of Tether.

While the author @revisesociology presented in its post options to use UST (and not only) in the Terra ecosystem itself, this seems like an ecosystem which understands the power of interoperability.

A year ago TerraUSD was announced as the interchain stablecoin.

Since then, UST has been bridged to Ethereum and Solana.

But they haven't stopped expanding. Next in line is Cosmos Hub. They already upgraded their blockchain to allow the interlink with Cosmos. All is needed is the approval of the stakeholders to be switched on and the interlink become effective. I suppose they already have a majority support for that or they wouldn't have bothered. 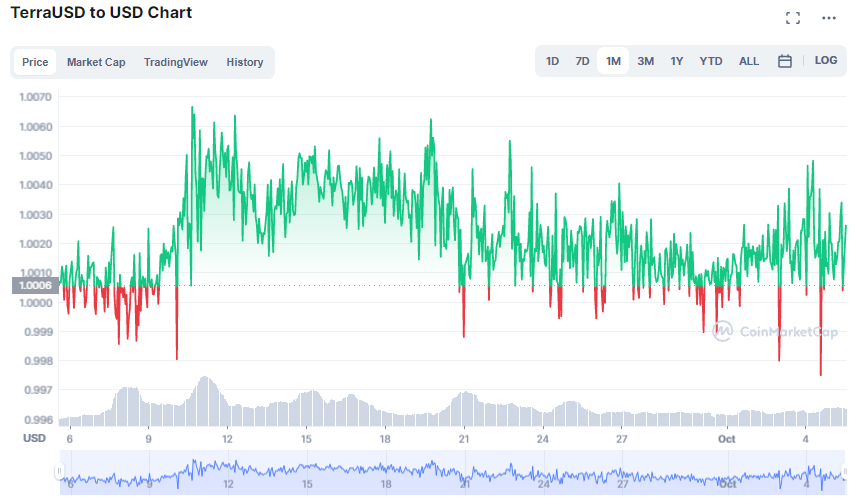 In about two weeks, we should probably have IBC transfers activated between Terra ecosystem and Cosmos Hub. And the first major stable coin on Cosmos (there is another one that I know of, less known - EEUR from e-Money).

This is a major move, especially for Cosmos Hub, which now has in its network a blockchain with a stable coin that has traction, but also for Terra, which gains access to almost 20 blockchains this way.

You can read more about it in this post from a few days ago.

UST is an algorithmic stablecoin. So is HBD. Maybe we can learn something from this. I wonder what Hive's cooperation with Telos is about...

The speed that Terra is expanding right now is wild.

They still have so much momentum behind them and already I'd say UST is clearly the best stablecoin.

Adding the ability to be used on Cosmos is just another feather in their cap.

UST and HBD:
Your comparison to Hive Backed Dollars at the end is interesting too.

Just like UST, HBD's makeup means it has the power to avoid the regulatory scrutiny that we're seeing Tether and the like come under.

Will this be yet another lost opportunity for Hive?

Or can we afford to just sit back and wait for everyone else to be regulated out of the market and then just presume a defacto position as a go-to stablecoin?

Yup, I agree, UST has a great momentum going on for them and they are speculating it fully.

Sometimes I wish we on Hive were more moving faster (or just moving, lol) in what has turned into a race towards interoperability. We've taken some steps, but mostly punctual projects that got out and expanded beyond Hive. Dan and Matt also did a great job trying to see what Graphene technology is still alive and kicking and interconnect with it.

In the future cryptosphere (and that could be only a few years away), no single ecosystem can make it on its own, without creating strong bridges, in my opinion.