I Started to Dip My Toe into Diesel Pools Lately

@gadrian 71
about 1 year ago
LeoFinance

I watched the announcements regarding the evolution of the diesel pools development for quite some time, but effectively I only started to use them recently.

There are some significant differences between an AMM like Uniswap or PancakeSwap, to which CubFinance investors are more accustomed with, and diesel pools.

First of all, there are no swap/transaction fees in diesel pools. We are in the Hive ecosystem after all. The problem with the no fees approach is how do you incentivize liquidity providers? The solution they found is through additional BEE inflation, pending approval of BEE stakeholders for each pool which wants to add it, as well as manually adding one of more "bags of rewards" from where distribution takes place.

These bags of rewards can be ANY token, as far as I understood. It is not uncommon to have a diesel pool offer multiple reward tokens, like we can see in the screenshot below, for the SWAP.HIVE:PIZZA pool: 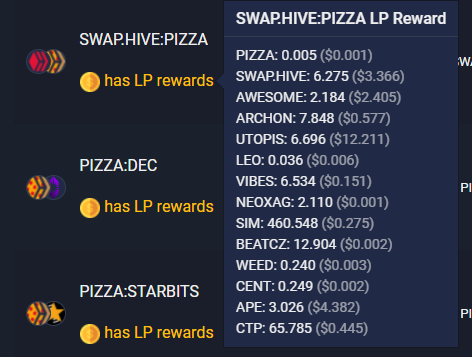 It is also possible that a diesel pool has no LP rewards at all, in which case the golden text "has LP rewards" won't show below the pair. That's another difference, on the "traditional" defi platforms you most likely won't see unincentivized pools, at least from the collected fees.

Compared to the regular Hive-Engine or LeoDex websites, with order books, diesel pool AMMs have a higher liquidity. Which means you can more easily swap between two tokens of a pair than through Hive-Engine when you have higher amounts.

People who have only traded using order book systems so far should first learn about slippage for swapping tokens and impermanent loss if they intend to provide liquidity to a pool.

What diesel pools lacks is a more decentralized infrastructure. I remember some time ago the main API server for Hive-Engine from the core team failed and everything pretty much froze until it was restored. They have backups and all, but still it's not decentralized from what I can tell. That means that even with the witness system for HE, this still needs more work.

Diesel pools are an improvement over Hive-Engine order books, that's a certainty. They keep up with the times, and that's great. And diesel pools just started to be used little by little by various projects. If Hive-Engine itself produced an entire economy around it, I wonder where its upgrade (including Outposts and NFTs capabilities) will lead to.

@gadrian! I sent you a slice of $PIZZA on behalf of @vimukthi.

Yup, I believe many of us who are involved in CubFinance will be interested in PolyCub as well.

@gadrian! I sent you a slice of $PIZZA on behalf of @vimukthi.

@gadrian, you've been given LUV from @vimukthi.

Polygon Cub? I hadn't heard of this before. I will try to understand what it is. !BEER

It's another defi app the LeoFinance team is working on for the Polygon blockchain. It won't be called Polygon Cub, we just nick-name it like that. It will be launched through the IDO feature on CubFinance (You'll practically "swap" CUBs for PolyCUBs, if you participate. The CUB part will be burned and the same amount worth in $ of PolyCUB - which will have a different name - will be issued to you on Polygon.

thanks for pointing out. Hi @ilpobre, it looks like Cubfinance and Polygon will be teaming up for DeFi. Read the answer above by Gadrian

looks like Cubfinance and Polygon will be teaming up for DeFi

This is not really a teaming up. Leo team creates another app which will be on Polygon. Polygon blockchain and the team developing it or running it has no part in this, other than being the support where the app will run. This is the same on Hive and its apps.

thanks for this clarification

Follow posts from @leofinance and @khaleelkazi to learn more about the project.
!PIZZA

@stefano.massari! I sent you a slice of $PIZZA on behalf of @vimukthi.

Thanks for this feedback

Hey @vimukthi, here is a little bit of BEER from @stefano.massari for you. Enjoy it!

I'm happy to see that DeFi liquidity pools on Hive are starting to get some more exposure.

'DeFi on a feeless blockchain' is just so marketable.

Add it to the list of things that Hive can do better than 99% of the blockchain world, but nobody knows about...

Gotta be top of the list for the Hive-Engine team to get on top of.

This is why defi on Ethereum is still a very big thing, despite its enormous fees. It's perceived as the blockchain with defi that offers the best security (which includes decentralization of miners at least - not sure how that will play out once they switch to PoS).

Thanks a lot for this information. I have wanted to get involved in Diesel Pool because I saw it as home grown or Hive grown Defi. But I couldn't find enough information about yield. Your post has clarified a lot of my questions.Upvoted and shared on my blog.

I'm glad it was helpful. It's nice to have a defi platform on Hive at the second layer too. Even better that it looks like Uniswap, it will be easier for anyone coming from the outside to get used to it.