Loop Finance should move to Hive

@forexbrokr 73
about 2 months ago (Edited)
LeoFinance 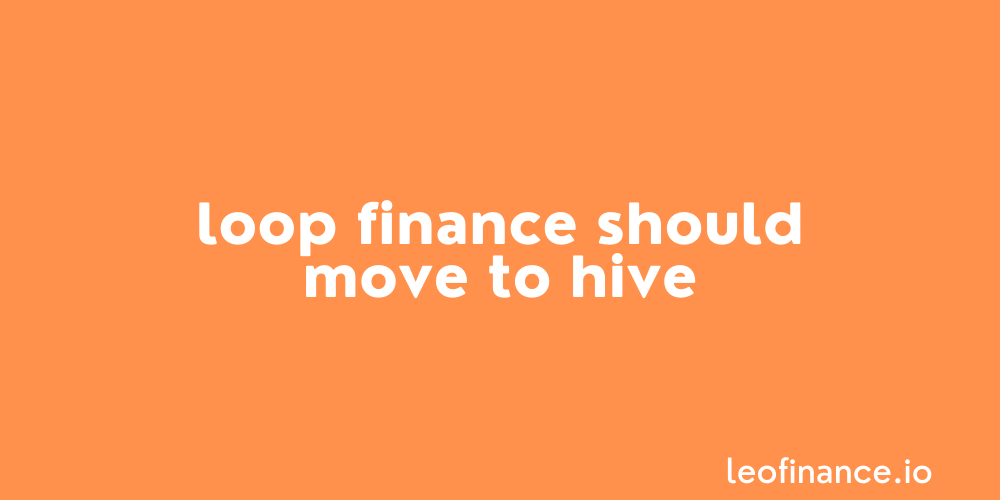 Direct from the desk of Dane Williams.

Following the Terra blockchain’s demise, I take a look at why projects like Loop Finance should move to Hive.

Did you know that Terra (LUNA) is actually more than just UST?

After everything that has gone on this past week surrounding Terra’s algorithmic stablecoin imploding, you could have been forgiven if your answer was no.

What an absolute shitshow huh…

Well, with the fallout just now starting to settle, the non-UST exclusive projects on the chain are left picking up the pieces.

Let’s take a look at a project that our own LeoFinance community knows well, in the publishing platform called Loop Finance.

Going over why I believe they should move from Terra to the Hive blockchain.

Who is Loop Finance?

Loop Finance bills itself an all-in-one, decentralised finance and cryptocurrency education platform, that alongside the publishing platform also includes:

But after the bigwigs over at Terra HQ decided to flick the switch without telling anyone, Loop Finance was essentially made homeless.

Even with the (so called) blockchain coming back on, a project that uses the word decentralised that many times to describe who it is and what it does, just can’t continue to function on Terra.

So Loop is looking for a new home:

Now you can see Hive didn’t make the shortlist and obviously isn’t front and centre of the team’s mind (lol at us and our lack of marketing dollars).

But if they truly are building a decentralised community, then Hive needs to be considered as the foundation for everything Loop does.

Hear me out here!

Your project’s base layer is the key

It is so frustrating to see that the conversation about blockchain and crypto ignores the only point that matters.

Whatever you’re building on top, all that matters is that your base layer is secure.

And what Hive offers is a truly Web3, decentralised base layer.

I would go as far as saying that Hive is the only blockchain that fits the bill as being able to provide such a decentralised base layer for your dApp and community.

After moving Steemit’s pre-mine to the DAO, Hive now has no pre-mine or VC-backing of any sort.

You will find that when it comes to the HIVE token, no single entity currently holds more than 5% of the total supply and has all but zero opportunity to accumulate a controlling stake under the chain’s DPoS system of governance.

Hive’s tokenomics means that inflation continues to be distributed via a rewards pool, ensuring an ongoing diverse spread that is EXTREMELY difficult to gain control of.

And with the risk of forking still present, why would a future attacker risk their own money inflating prices on the market when they know the real value is in the community anyway.

Hive is the base layer that Loop Finance needs to build on top of.

LeoFinance is the model Loop needs to look at

So does that list of what Loop Finance do look familiar to you?

A tokenised publishing platform that encompasses DeFi, education and more?

And as we’ve seen with what Khal and the LeoFinance team are doing, not everything can be done here on Hive.

This is not a bad thing.

Because remember, the key is that the base blockchain that houses your community’s accounts and assets provides all but zero risk of a catastrophe like we saw play out on Terra.

I’d encourage Loop Finance to sit down with Khal and the LeoFinance team to discuss the direction they want to go in and how to integrate the truly decentralised, immutable Hive blockchain at the base layer for their community.

Loop… Another VC-birthed blockchain at your base layer is NOT the answer you’re looking for.

Best of probabilities to you.

@poshtoken 76
about 2 months ago (Edited)

I still think they will flock to where the money is and that tends to be the bigger chains like ETH, Polygon, or BSC. I wouldn't mind if they moved to Hive instead as the fee structure would be attractive to a huge number of users.

In my opinion, the team should at least consider Hive for their social base.

The greed of getting huge money quick would continue to ground many in the cryptoverse. On Hive, we grow slow and organically.

I didn't know that it was on that blockchain, If they haven't looked at Hive they are nuts. imho

Most overlook it. Might be a hard conversion from a technical side of things. I dont know.

The HAF should help.

Yeah, they're Terra through and through.

The thing is that they're actually so much more than just a social community.

It's just tokenised to offer rewards.

But if they truly want to take the community aspect of the project to the next level, then like you say, they'd be nuts to not look at Hive.

Loop Finance, in my opinion, was a nice and well thought out project. But I don't think they will be attracted to HIVE. Most likely they will look for platforms where more money moves, or they will wait to see what happens to TERRA with the recovery plan. That's my opinion.

If they have built a lot there, it is smart to see what the plan looks like.

it would be interesting if they moved to HIVE, they would choose efficiency instead of money right away

Yep, it seems that is the way that Loop want to go.

In the short term, money is all that matters and that's not something that Hive can offer.

But long term, having a strong, decentralised base network is key for any community project.

And this is where Hive shines above all the other competitors.

It would be nice if they chose HIVE as a platform, but I've always seen them close to the world of Cosmos and they could also stay on TERRA to be part of the rebirth of the chain

It made an impression on you we see. LOL

With a shitload more money floating around their ecosystem than ours too ;)

but they don't have much utility as far as I can see.

We don't seem to have the capacity to attract projects from this fallout because everyone out there is incentivizing them. 3-4 chains offering big money for migration and a truly decentralized community will always find it hard to compete in such situations.

Would love to see it happen though. We only need one to get the ball rolling...

That is the thing and part of the problem. If a chain can offer big money, it could suffer adverse affects.

Hive just needs to keep building to the point where people are tripping over themselves to get here.

Screw it, we will build it ourselves.

As I said above, in the short term, money is all that matters.

But long term, having a strong, decentralised base network is going to be the key for any community project.

A few more Terra's down the track and popular opinion will agree.

Ignorance is just the point with many startups looking for funding and not finding Hive as the best place. The Decentralized Hive Funding/DAO is in place for any great project to leverage and grow with. But it takes time and patience to build that trust on Hive. Only a few want to pay that price.

And with the risk of forking still present, why would a future attacker risk their own money inflating prices on the market when they know the real value is in the community anyway.

Couldn't say it better. It's such a pity that a dead project like LUNA still has a way bigger market cap than HIVE has, despite HIVE's functionality and pedigree.

Hive is building from the ground up. We take a slower approach and the world is not seeing what is being developed. But there are some really strong things taking place.

Exactly, what I said somewhere in the comments section down. We're slower in our growth process and I think it's better.

They will always record a big number since they can manipulate their numbers. True decentralization exist in just a few places.

Hive is an undiscovered gem. As more of these situations pile up like Terra, people are going to start to realize what we were saying all along.

In the end, those projects that build on chains like that are incurring a great deal of risk.

With Hive, the blockchain will keep running no matter what. There are more than 100 block validators who are incentivized to keep it running.

All roads lead to Hive in the end...

I totally agree with you that in the future, the entire cryptoverse would converged on Hive. They cannot ignore Hive forever.

Amazing to learn about the existence of Loop finance. I see a few things there that Leofinance could integrate. Maybe we launch a Twitter campaign to #bringLoopFinancetoHive.

It would be a pretty healthy journey to have these two running on Hive and it could hasten mass adoption.

Definitely stop by their Twitter and let them know what Hive can offer the social aspect of their community.

Every crypto project should build on Hive. Look at @brianoflondon and his lightning project.

The man is doing a great job :)