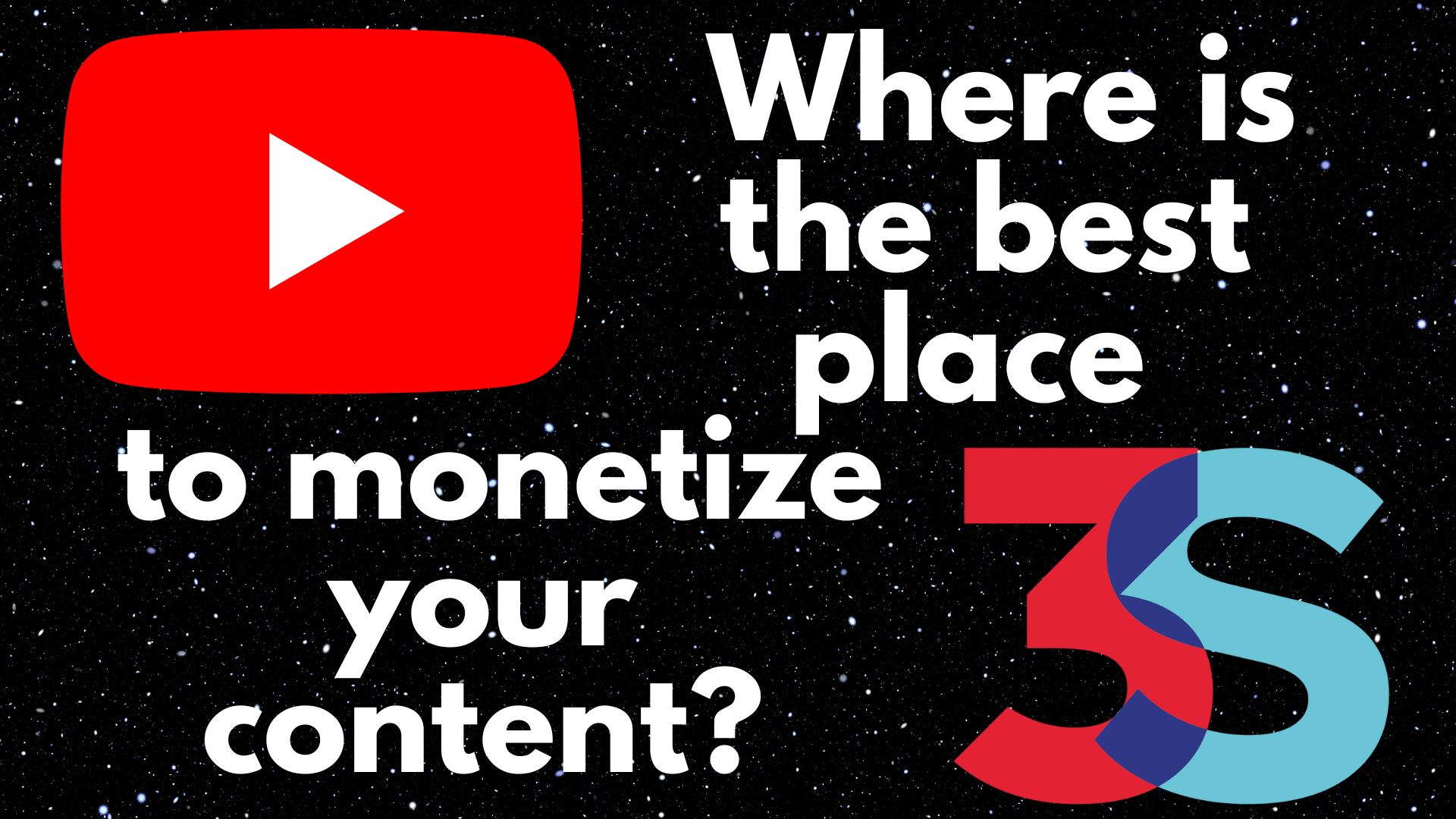 I think that question answers itself, as the vast majority know that YouTube is the best place and the most sought after due to its high degree of monetization that has the content that users can upload, plus the time it keeps monetizing is indefinite as long as the video complies with YouTube's policies and copyrights.

But, although YouTube is a giant in the industry of social media and content monetization, after seeing numerous tests taken from the experiences of users with large YouTube channels, I still firmly believe that 3Speak is by far the best place to monetize your content, of course it has some limitations, but it is certainly much better than YouTube.

I came to this conclusion (again) after watching the video of one of the channels I follow on YouTube, ANDRES SÁENZ a person who like me loves diverse investments and cryptocurrencies, in fact, his channel focuses on finding different types of investments so that with perseverance you can generate a good long-term livelihood.

And a few days ago Andres Saenz, uploaded a video where he explained in detail how much he generated with his YouTube channel that has more than 1 million subscribers, and I could see that with that large base of subscribers Andres generates per month between €1500 and €2400, but this is only with long videos of more than 8 minutes. Now the point I want to get to is that Andres showed the statistics of how much his short videos generated, which lately have been very popular in all social networks, since the short content attracts a lot of users.

And in the video we can see that more than 60% of all the visits that Andres' channel has in 1 month come from the Shorts, with a total of 5.9 million views, while the longer videos represent 38% of the total visits in 1 month. 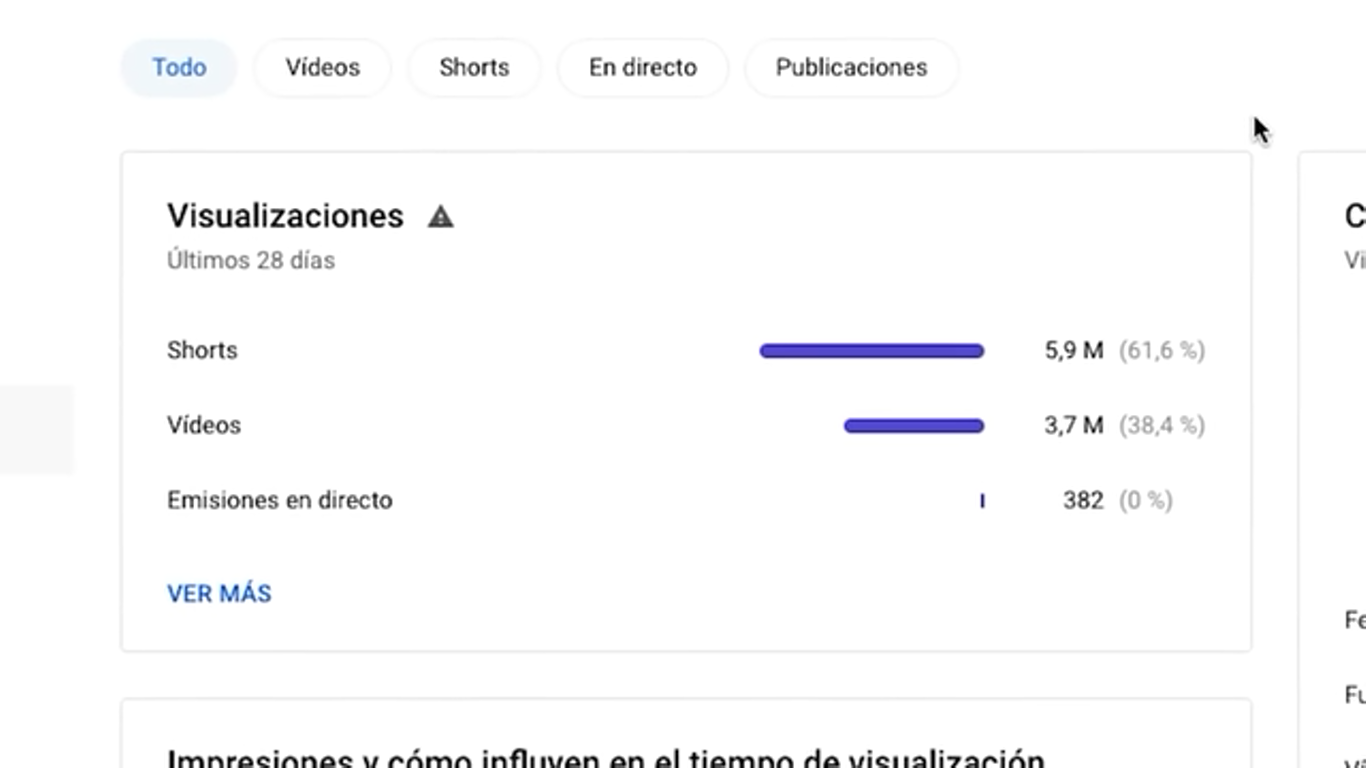 Now, I came to the conclusion that if for 3.7 million views he was paid approximately €1600 per month, then for 5.9 million views it must be much more. But things don't work like that, since being short content you can't put advertising on these videos, so they don't count as eligible content for monetization, and in fact those 5.9 million views that Andres' channel had in the last 28 days only brought him a profit of €7.47 and this making an average of 6 shorts per month (since it is a channel focused on long duration content). 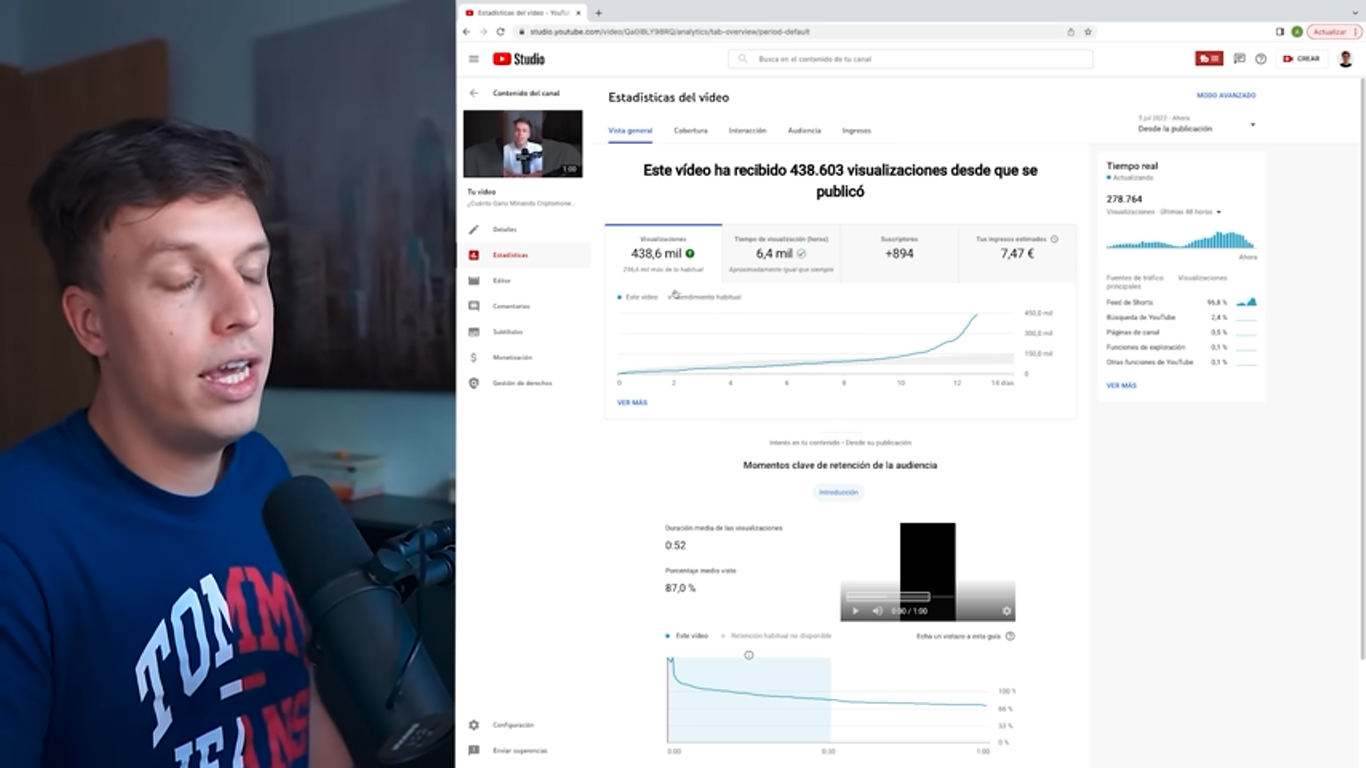 Now, thinking of a person who would like to start as a content creator focused on cryptocurrencies, games, makeup, news, blogs, travel, etc.. And would like to make short content such as shorts, it would not be very profitable because the monetization would be very little, and to make money with long videos must meet certain requirements imposed by YouTube, such as a minimum number of followers, a mandatory amount of views per month or per day, among other things. Which, looking at it from a realistic point of view, it would take you about 1 year or more to be able to generate real income from your content on YouTube with a constant effort.

But if we now see what happens in 3Speak, the video platform of Hive's blockchain, the story would be very, very different, because in 3speak you can generate income from the first video you make, since the rules that are established in 3speak for content monetization are simple but strong: 1) Quality and 2) Originality. In 3speak you will not be asked for a base of followers, nor a minimum number of views, the only thing that is asked of users who use 3speak to share their content is that it is of quality and that it is totally original. And the rewards are much greater than what you can get on YouTube with shorts and in less time, let's see an example.

On the main page of 3speak you can see the videos that are trending and rising, you can see different rewards ranging from $23 to $140. But let's focus on a publication of the user @pedroerami and his video: Hiking Sunday, Hill: "Palma Sola" [ESP/ENG]

As the red box shows us, this video has only 57 views, but if we look at the numbers in the red box, we will see that this video generated $81.82 for the user @pedroerami for a 9 minutes video. And it is a video that meets all the requirements, since it is something original and of high quality.

It is incredible to see that for having less than 60 views, 108 followers and without any exposure from advertising campaigns, @pedroerami was able to monetize much more than what a YouTube channel with more than 1 million subscribers generates in a month with 6 shorts videos. 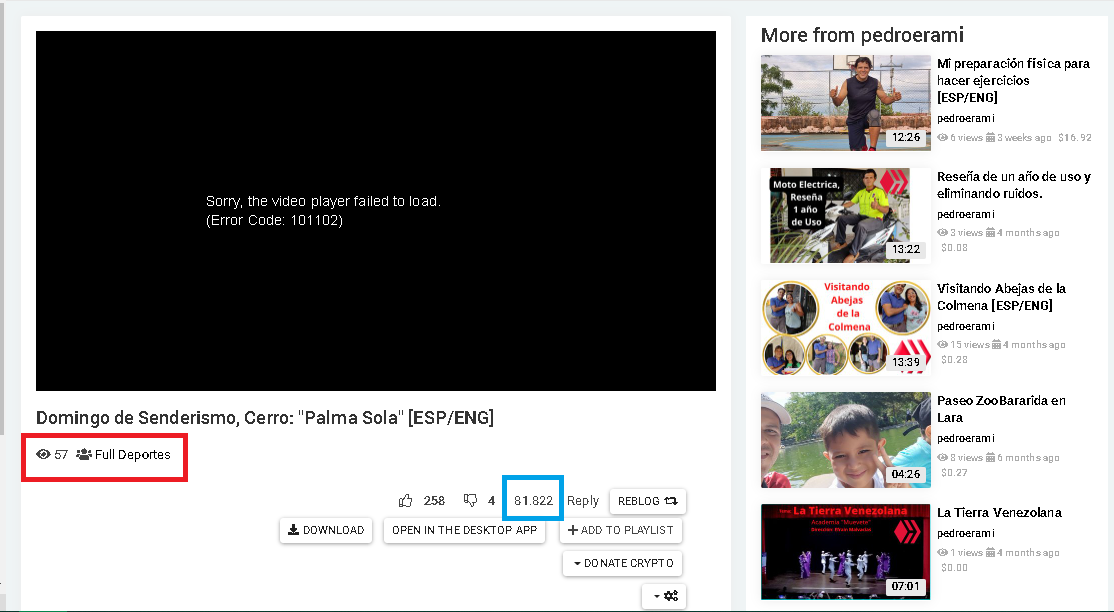 Of course, there are other factors to take into account here that may make YouTube a better option, but if we look at the big picture such as decentralization, monetization without so many requirements and the great speed with which you can grow a channel on 3speak, we will see that the decentralized 3Speak platform is a much better option than YouTube.

If you want to get excited to join 3speak and start publishing your content and start monetizing it, do it by getting a Hive account https://signup.hive.io/ and then logging in at 3Speak/Signup

Thank you very much for reading....

Hi @fabian98 thank you very much for your mention and support, I also follow Adrian Saenz on youtube. Very interesting your analysis, I agree with everything.
Decentralization came to change everything. Everything.
That expression, that in social networks we are all on equal terms, ended a long time ago.
Before starting, with perseverance and dedication to my blog, I took an Instagram course, it was called: Monetize your passion. And they told us to dedicate a minimum of 4 hours to the social network, that in 3 to 5 years, we could begin to see results.
It seemed crazy to me. So much energy, for so much time, and that possibly, "maybe" in 3 years in the best case we could start to see positive results.
The detail is that in 3 years the algorithm will change so that everyone will have to continue running like a horse behind the carrot.
A real manipulation.
Like the example of the short videos "shorts" that you explained.
Hive is so far the best option I know of for anyone who wants to progress. Hive took me to step by step to learn: HTML, photography, video editing, writing, illustration, decentralized wallet management... and many other things. I'm not the same as I started, I'm a better version of myself, and I've also perceived some cryptocurrency in the process.
I see so many people, creating content for Facebook or WhatsApp, with dedication and effort. They are free to do what they like. But Facebook is a big company, and they have a product, they consume and feed at the same time.
Hive is personal and economic empowerment, for its users.
We will keep in touch, as your blog has content of my interest.
A fraternal embrace.
Translated with www.DeepL.com/Translator (free version)