BTC to $100K - Is a new resistance possible tomorrow?

"It's not a bird, it's not a plane, it's not even superman, it's bitcoin breaking all-time highs and taking on new upside resistance."

I think it is something that should make some news because of the new record bitcoin price that has been reached recently, as for over 6 long and desperate months, the price of the market leading cryptocurrency has returned to its highs and has set a new price of ATH. At the time of writing, the price is $66,685 and continues to rise aggressively and at this point it seems very possible that a price of 100K or 300K is possible by the end of the year as many holders point out.

The first to comment on this rise of bitcoin was Michael S, one of the top exponents and followers of bitcoin throughout this year, he mocked those who sold cheap seeing that now they have lost their chance.

** Is a new resistance possible?**

If we look at the bitcoin price chart over the last few months we will see that it had resistance ranges that then brought massive rallies. On July 21 was the end of the bitcoin fall where it hit its lowest price this year and that was $29K, there it took a resistance range that made the price go up to $41.9 but then it went down and took another range again which was $37.7 on August 21.

Then there were several drops in the price that did not indicate anything, but something very interesting happened on September 21 when it took again a resistance in the range of $40k and so far has not stopped. Of course the falls between September 21st and today do not indicate anything about a possible new resistance, but as the price pattern indicates every 21st of the month the price takes a new resistance, so it is possible that the price of bitcoin will fall tomorrow in the range of $56K to $59K, taking that range the price of bitcoin is likely to touch $75K at the beginning of next week and a possible price of $80K will receive November. 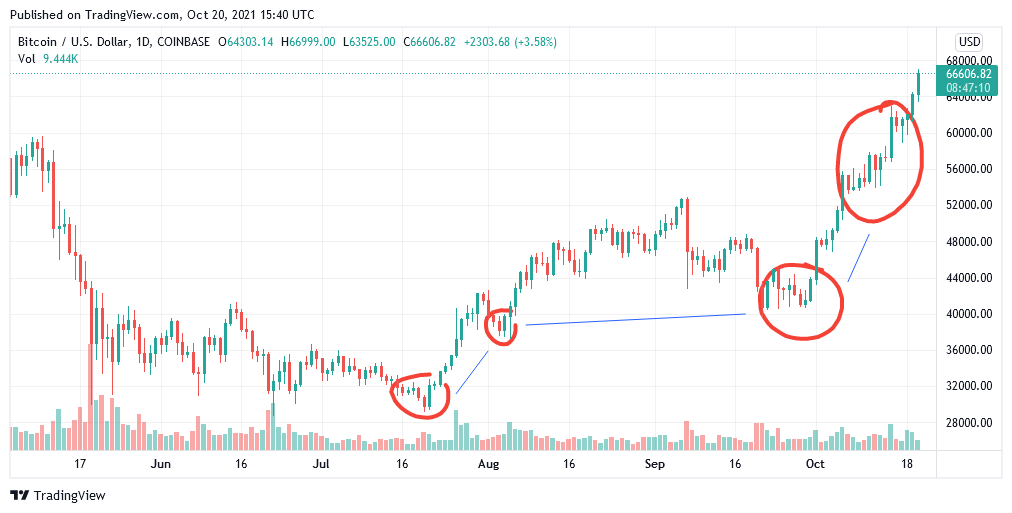 Of course, this is all mere speculation but if I get it right who knows maybe I will win a prize LOL. What we are seeing is that we are seeing big changes in how people are viewing cryptocurrencies, and although a bitcoin ETF sounds like a safer investment for people, seeing how holding bitcoin makes money grow faster many or rather the smart ones will prefer to hold bitcoin.

This is not financial advice.