We've had quite a correction this weekend, which has caused some waves in the crypto community and as usual, bulls and bears got into a fight on social media platforms (where else?). I think I'm already immune to these fights, don't care about who says what on Twitter and certainly don't get impressed by those who are willing to do whatever it takes to convince others they are right. Neither should you as it gives you no benefits.

The only thing that matters is what you do, what actions you take and how you protect your assets as you're making the profits and you're taking the losses too. The latter should however be avoided at any costs.

In a bull market 10k BTC swings are not unusual, so it should be considered and the latest was kind of visible as the monthly close was not what most of the traders/investors have expected.

So what about HIVE? We all know HIVE is a totally different animal, can't be compared to any other asset even though in my last post I said why should HIVE be different. Hive has always had an erratic behavior and it's so new we can't identify patterns in the chart yet. I think we have to wait for this bull run to end and then have a look at the chart. 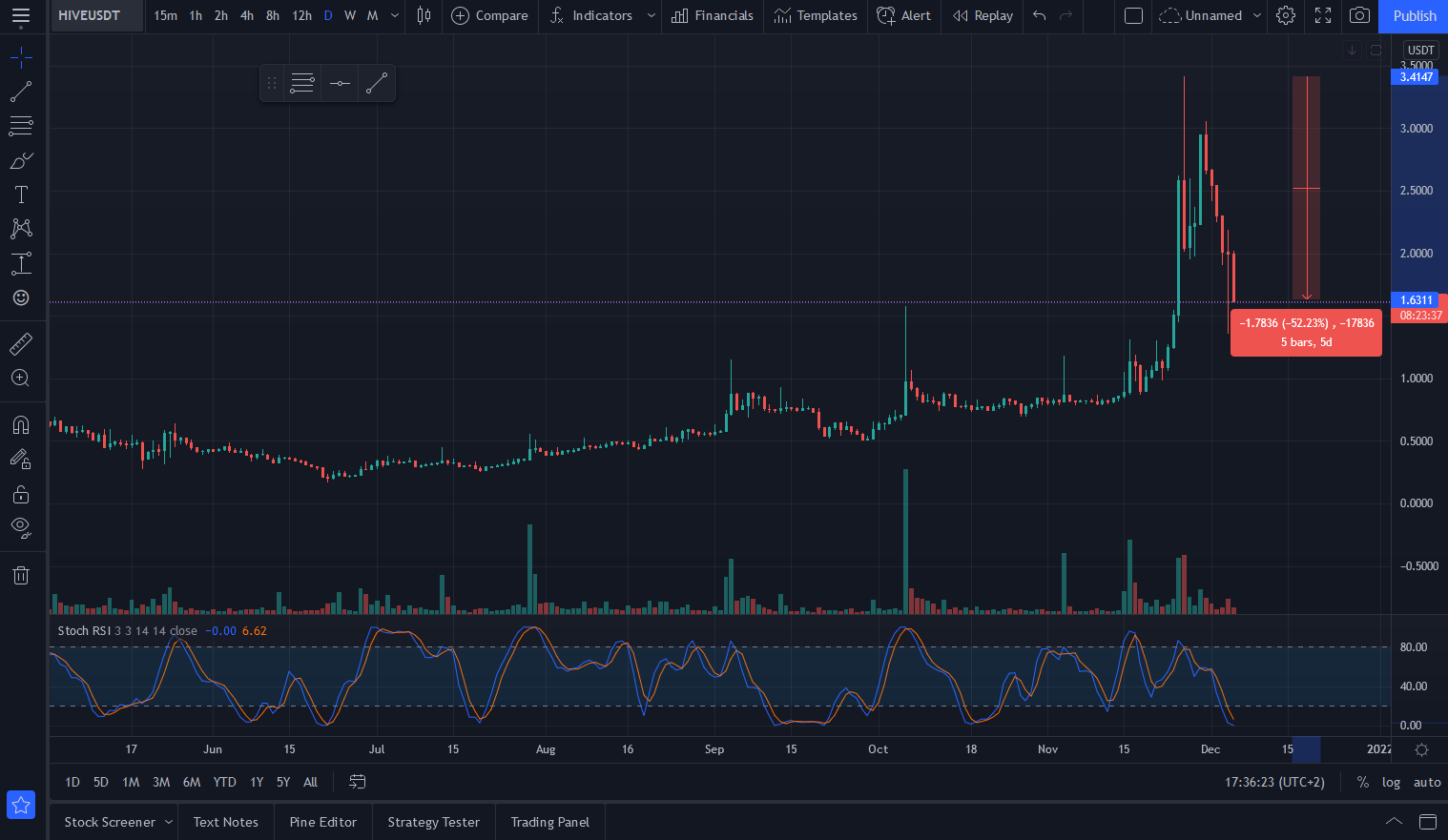 Although I'm not looking to buy HIVE at this point, I'm watching the chart to see where would be the best opportunity for an outsider to buy. We've had an 52% correction from the ATH. Buying something at an 52% discount should be appealing to everyone. However, if BTC does not behave, we are possibly going to see another drop. I'd like to think HIVE can't be influenced by BTC's price action, but that would be pretty naive. If BTC can't claim the $52k level, we're going to see it visit lower areas. Can this price action affect HIVE? Of course!

Most of the Hivers are HODLers, thanks to the proof of stake mechanism and not only. This bull run is a good opportunity to take some well deserved profits and many of us is counting on doing it, but we're not there yet. $1.6 is not a level at which anyone would want to sell with the intent of buying it back lower. We need that final leg to continue and HIVE to blow off the roof. 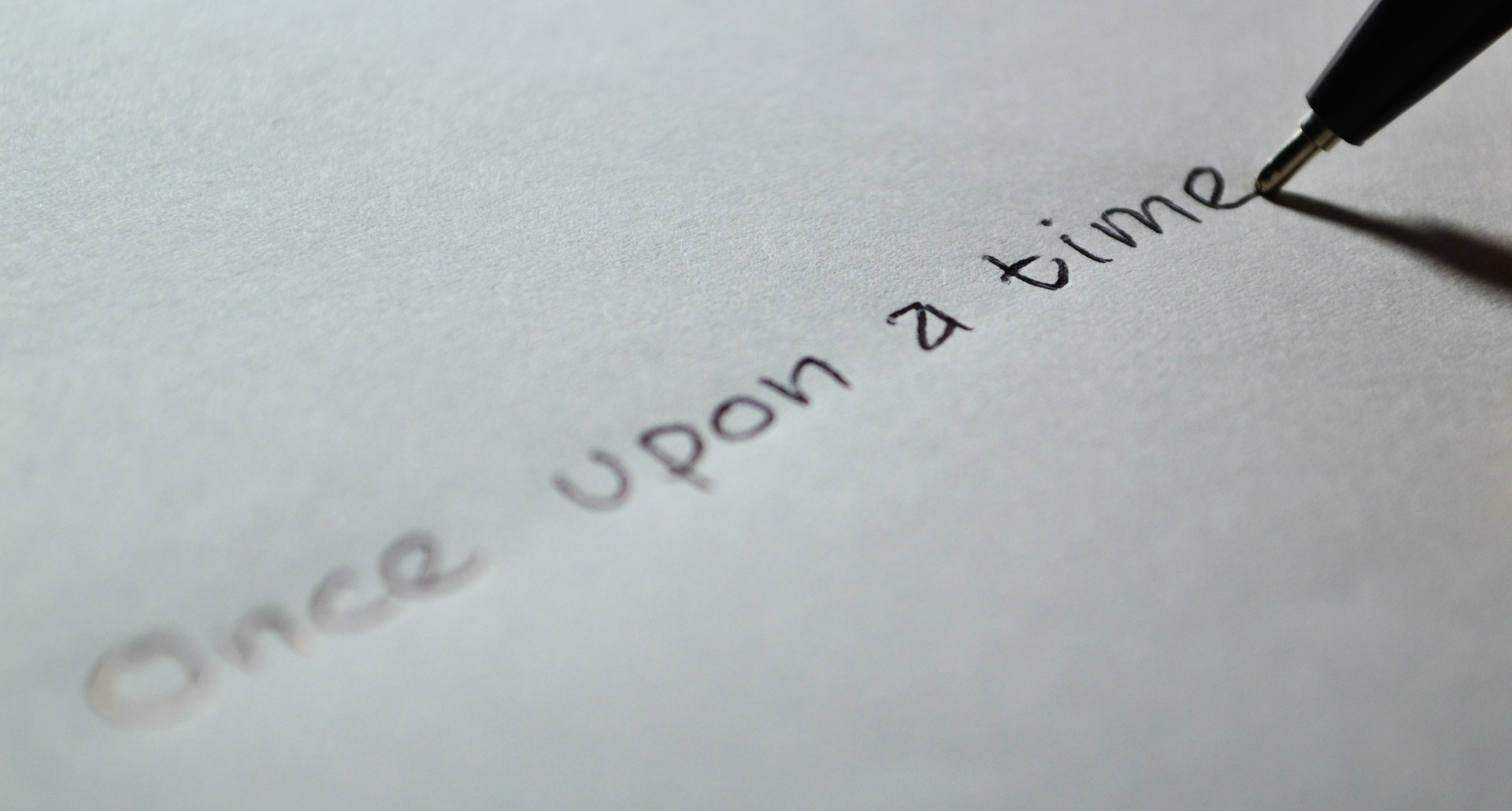 It's Time For Our Own History

Just as the current crypto cycle in general can't be compared to the previous two, I think it's time to stop looking at STEEM's previous cycle. There's no point in that as the HIVE chart we're printing is already very different, not to mention the fundamentals. That $8 STEEM ATH is not important anymore, unless you sold a lot at that price back then and bought it back at $0.12 or so. In that case congrats, you made the right choice. 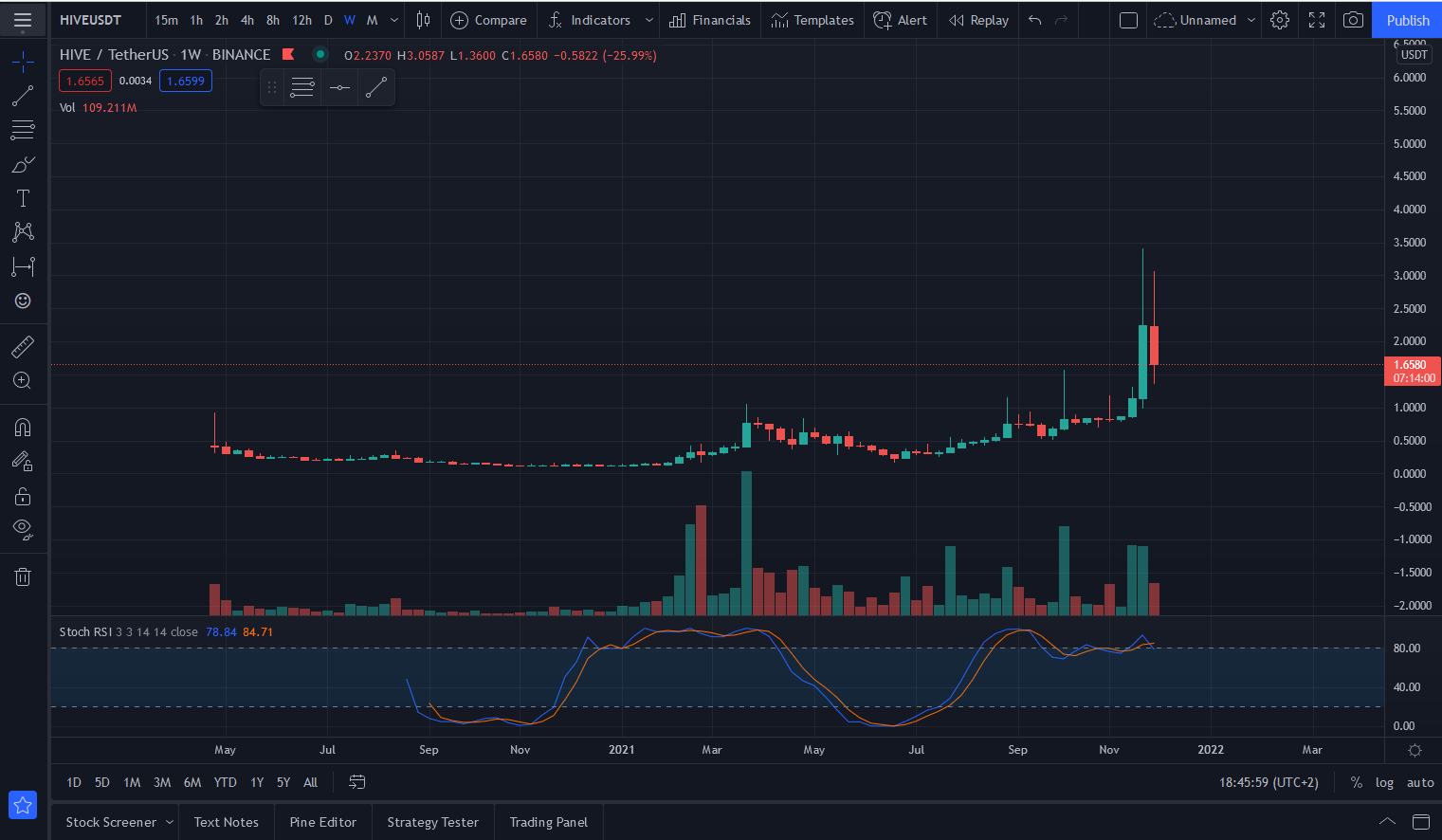 Hopium is good and it's been spreading all over but we have to be realistic here. As long as BTC is trading sideways or dipping, HIVE will most likely do something similar, if not the same to some extent. Unless we don't see history repeat itself, I mean someone throws 280 something BTC in the game to buy HIVE like last time, to drive the price up. To be honest, I don't see HIVE making a new all time high this month. But again, who knows. However, I truly hope HIVE can take off next month and do what it has to do.

Till then, we trade what the market gives us. Buy the dip, take profit, buy the dip again, till you can.

The funny thing is there's not much to go on with when you look at the chart, we have two candles for the last two weeks, one of which is not even closed yet as there are still a few hours left of the current week.

I'm impressed with how well you've integrated into crypto, I love hearing your opinions. Thank you!

Thank you Bluemoon, very nice of you but please don't trust what I'm saying as I'm still a rookie beginner 😁
Find an experienced trader who knows what he's talking about 😄

As you rightly said in your post, it is better not to follow the opinions of others. I've been wrong many times going by the hand of others.

Common sense. Which is not as common as it should be but you've got it :)

Bitcoin impacts the price of everything crypto, so another way to see how we are doing is to check Hive vs. Bitcoin instead of USDT.

I don't know what to expect from BTC, but Hive is on a bit of a run and looking fairly strong, which is a nice change from the pump and dump activity

BTC is going to consolidate a little here I think, there will definitely be a fight between bears and bulls and Hive possibly is going to do the same, unless some whales don't jump in again. With Hive you never know.