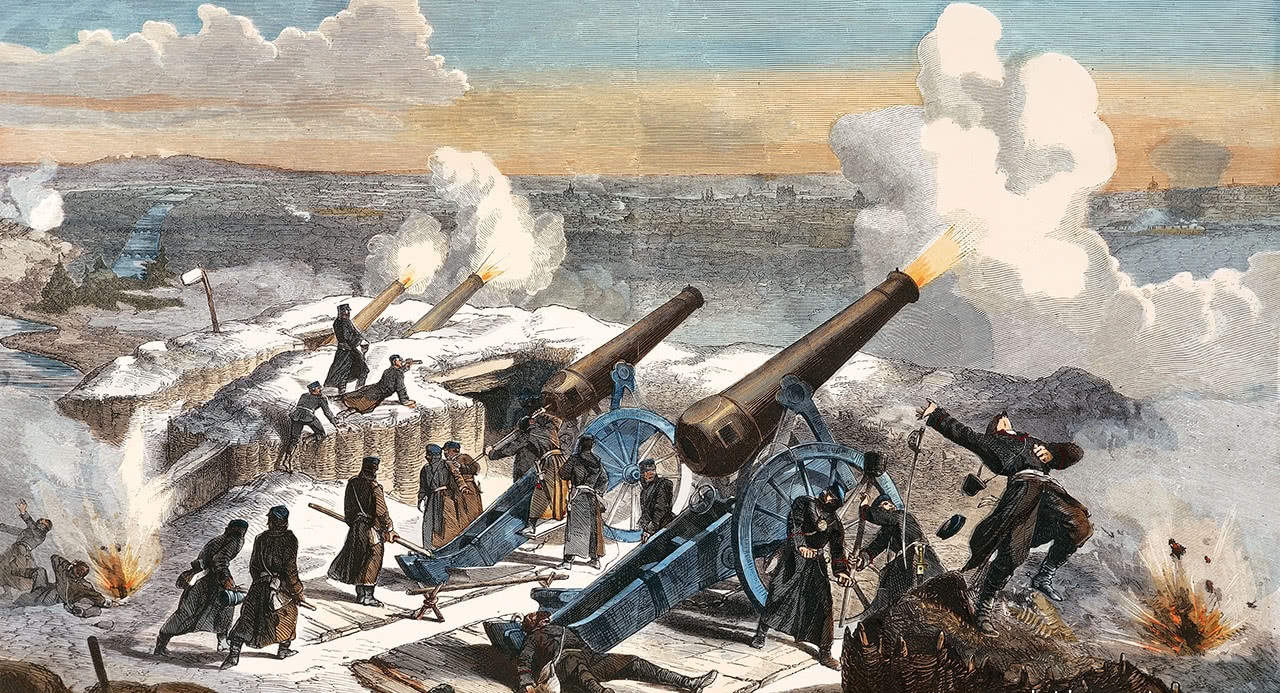 Oh, where do we begin?

The rubble or our sins?

Yesterday's Blood Moon obviously did not disappoint.
What a thing of legend.
Currently testing the local low range level of $17k-$17.5k
Not the most fun but it is nice to flush the garbage down the toilet.

Everyone thought FTX was solvent.

Why did they believe this? Because SBF said so... many times. You know what else he did? Deleted those Tweets and made a comment months ago about some exchanges being "secretly insolvent" way back when this all started during the last Blood Moon in May. lol. Nice. FTX has been insolvent for half a year and the bank run didn't happen until the next Blood Moon. So weird.

It began on Nov 6 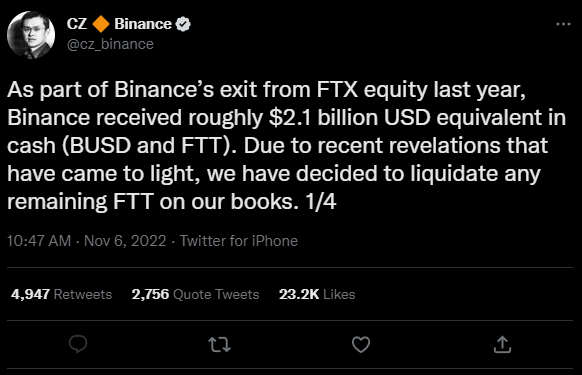 This, of course, sparked a bit of a panic; causing others to sell their FTT and/or remove crypto from the exchange. The plan was to hold the line at $22 FTT, but that failed and dropped sub $5 shockingly fast. Much Terra Luna vibes 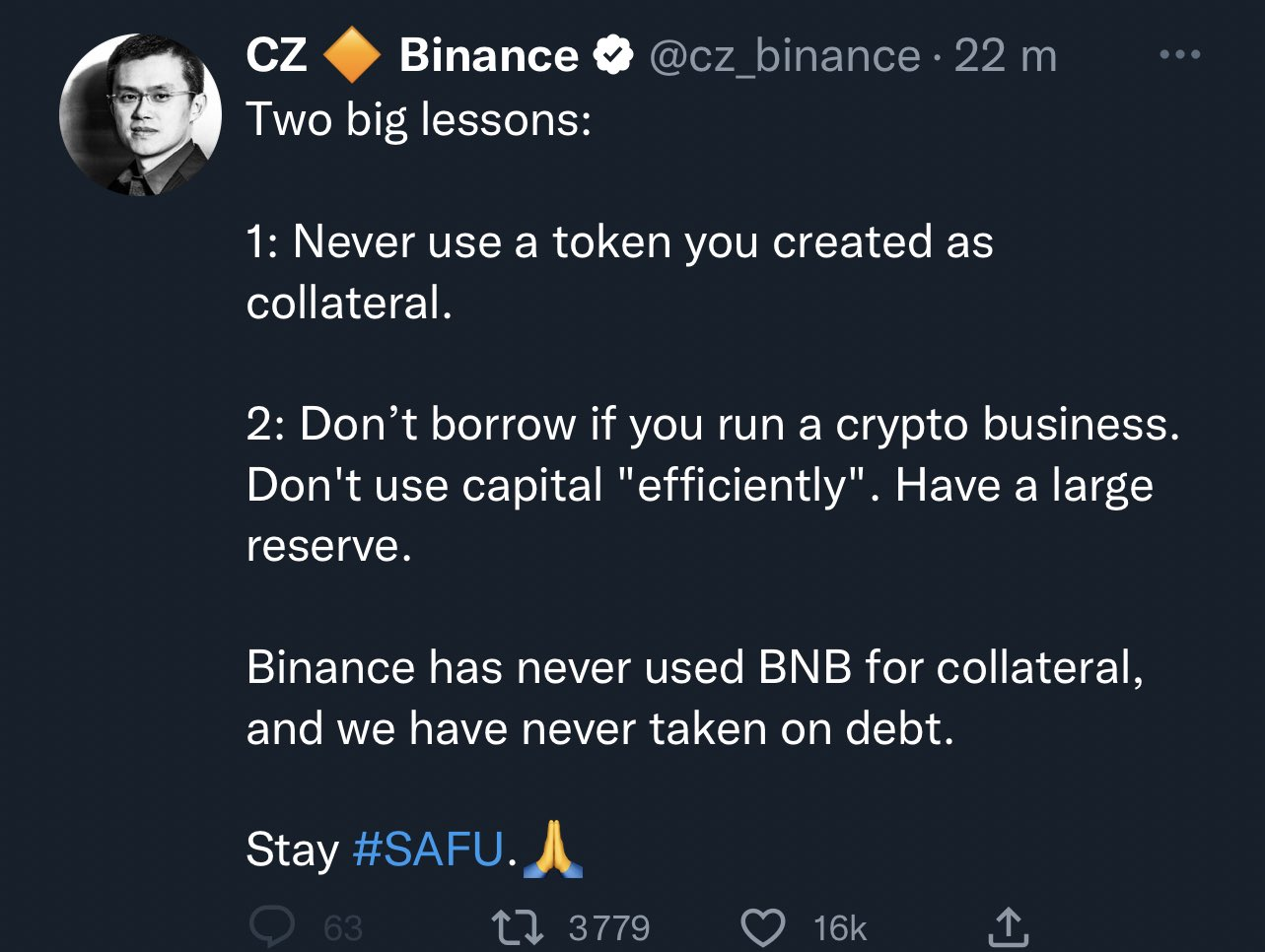 What a slap in the face. I mean... think about it. These aren't lessons that we are supposed to learn the hard way. These are obvious (possibly illegal) actions taken by those who want to gamble with customer funds. 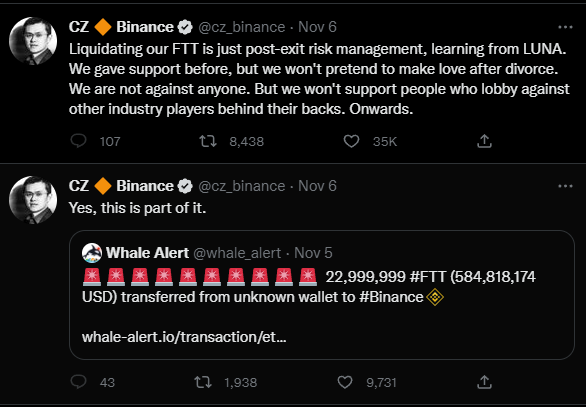 Isn't the underlying tone of these Tweets... pretty aggressive?
I was not the only one who interpreted them this way.

Later he dials it back after being accused of masterminding the entire scenario. I mean personally I feel like it was uncharacteristically public and slightly unprofessional, and at that same time it led to a literal bank run on the exchange that he is now buying. It's obvious he didn't mastermind the entire thing, but he played his hand and he played it well. Yet another hostile takeover. China doesn't fuck around, boys.

Many are claiming the deal will fall though and CZ will leave them high and dry. Why would CZ EVER do that? He's been buying up everything this entire time during the bear market. He's going to snub all the liquidity of the #2 exchange in the world and just be like "no thanks"? Yeah, that doesn't sound right.

He's going to integrate FTX liquidity pools into the Binance Cloud. This should be obvious considering it's already been done with Mandala exchange; this isn't their first rodeo. Binance liquidity pools are about to get a pretty big upgrade methinks.

Many are crying about this being a centralizing consolidating move. Really? Crypto needs more centralized exchanges so it can be more decentralized? That's like calling central banks decentralized because there are a lot of them and each one is connected to multiple retail banks. It's foolish logic. 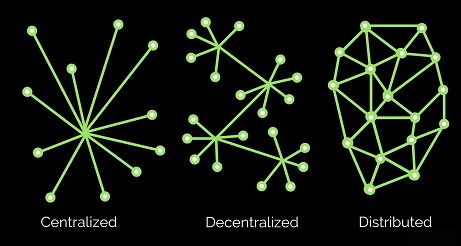 Because of all this speculation, the market is obviously in a state of complete chaos (thank you blood moon). We will have to wait and see where we are at in a week or two after the dust settles. Like I said in my last post: I believe this is all a RED MIRAGE. This blood moon, while volatile and destructive, just signaled the beginning of the next bull market. All the garbage has been flushed; it's time to rebuild... finally.

What we are hoping for is a full recovery to something like $19k within the next two weeks. That is pretty much guaranteed to happen if this deal goes through smoothly and CZ more accurately proves that Binance funds exist. Many are just blindly assuming that other exchanges like Binance and Coinbase are somehow insolvent, even though this is obviously not the case (yet). 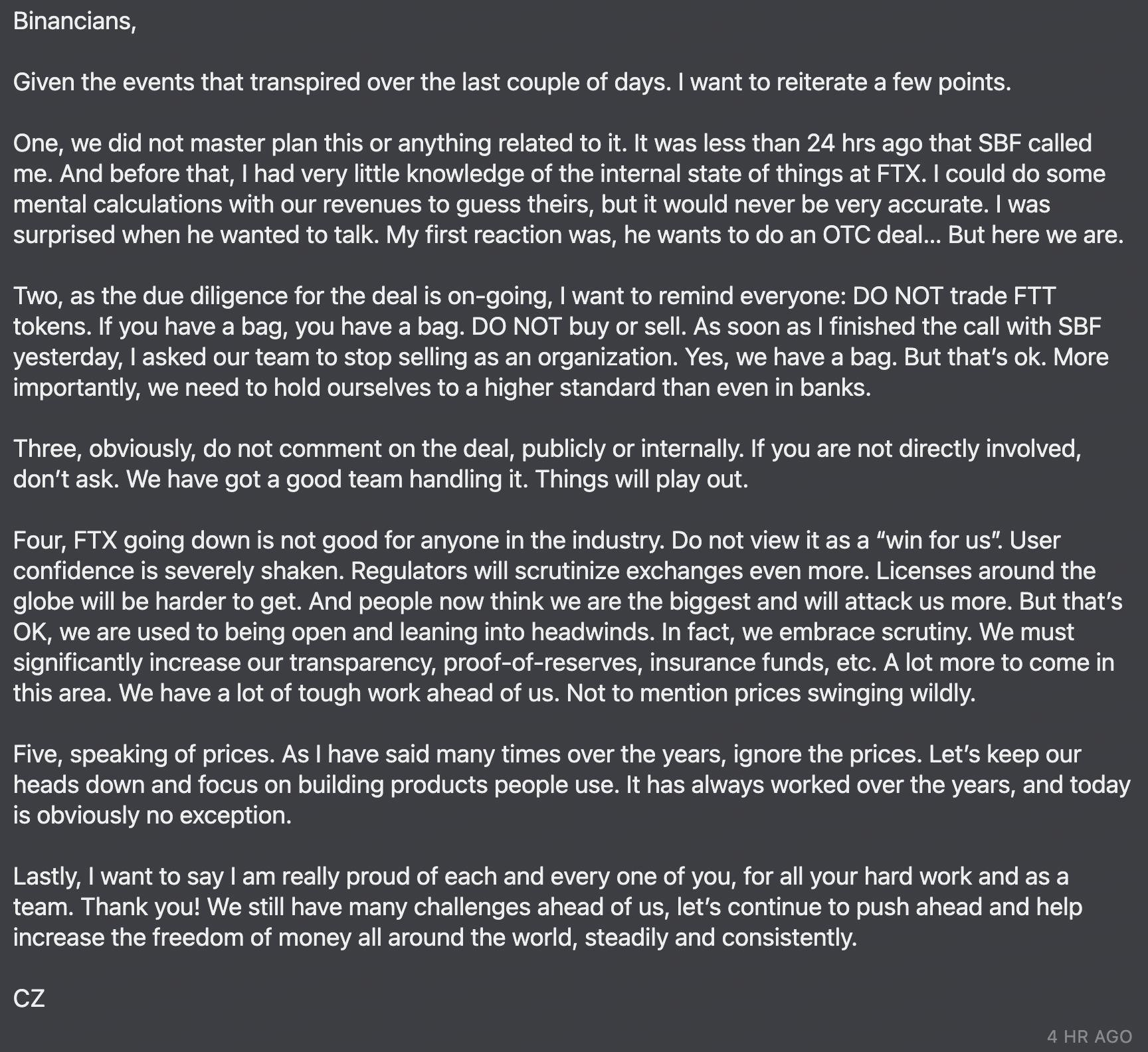 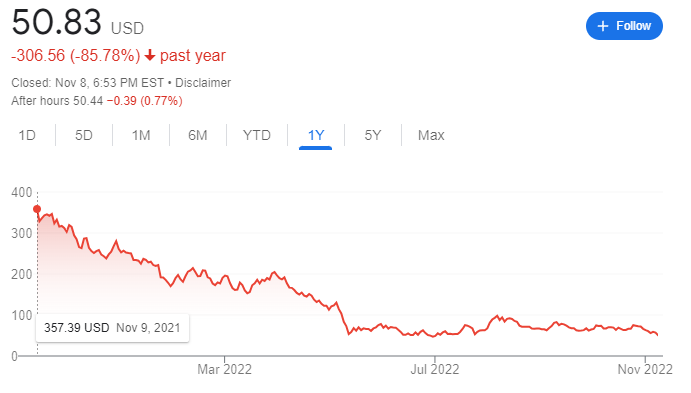 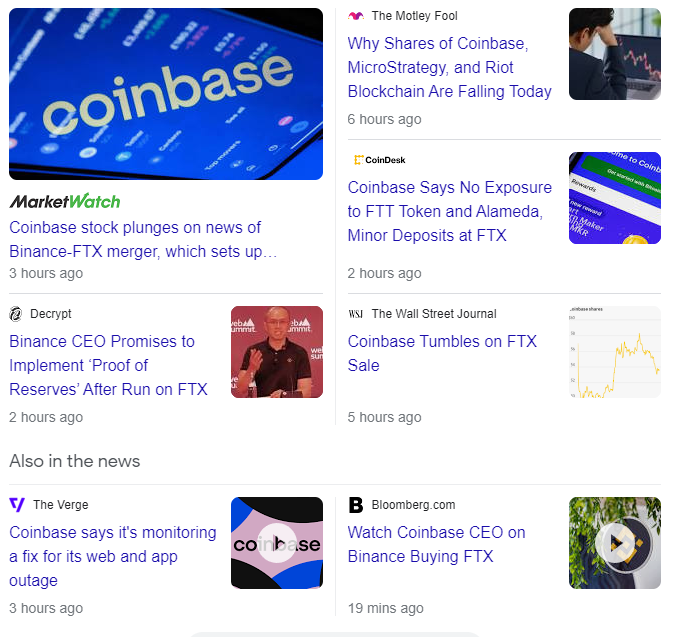 And then there is Coinbase.

Stock down 85% over the last year, crashing even more because of this supposed acquisition. Funny because Coinbase is one of the most trustworthy players in the space when it comes to a KYC exchange. Too bad their trading fees are x5 higher than Binance. Their entire business model depends on a steady inflow of crypto noobs who don't know how to access the better options. That might not be sustainable in the long run.

Coinbase has also gotten into some trouble with regulators in Germany. Considering the way Deutschland does everything ass backwards, it should not be surprising that there was a regulatory infraction within that branch of Coinbase. Of course everyone is so on edge from what just happened, it gets stacked onto the FUD machine as if Coinbase is insolvent as well. Comical. 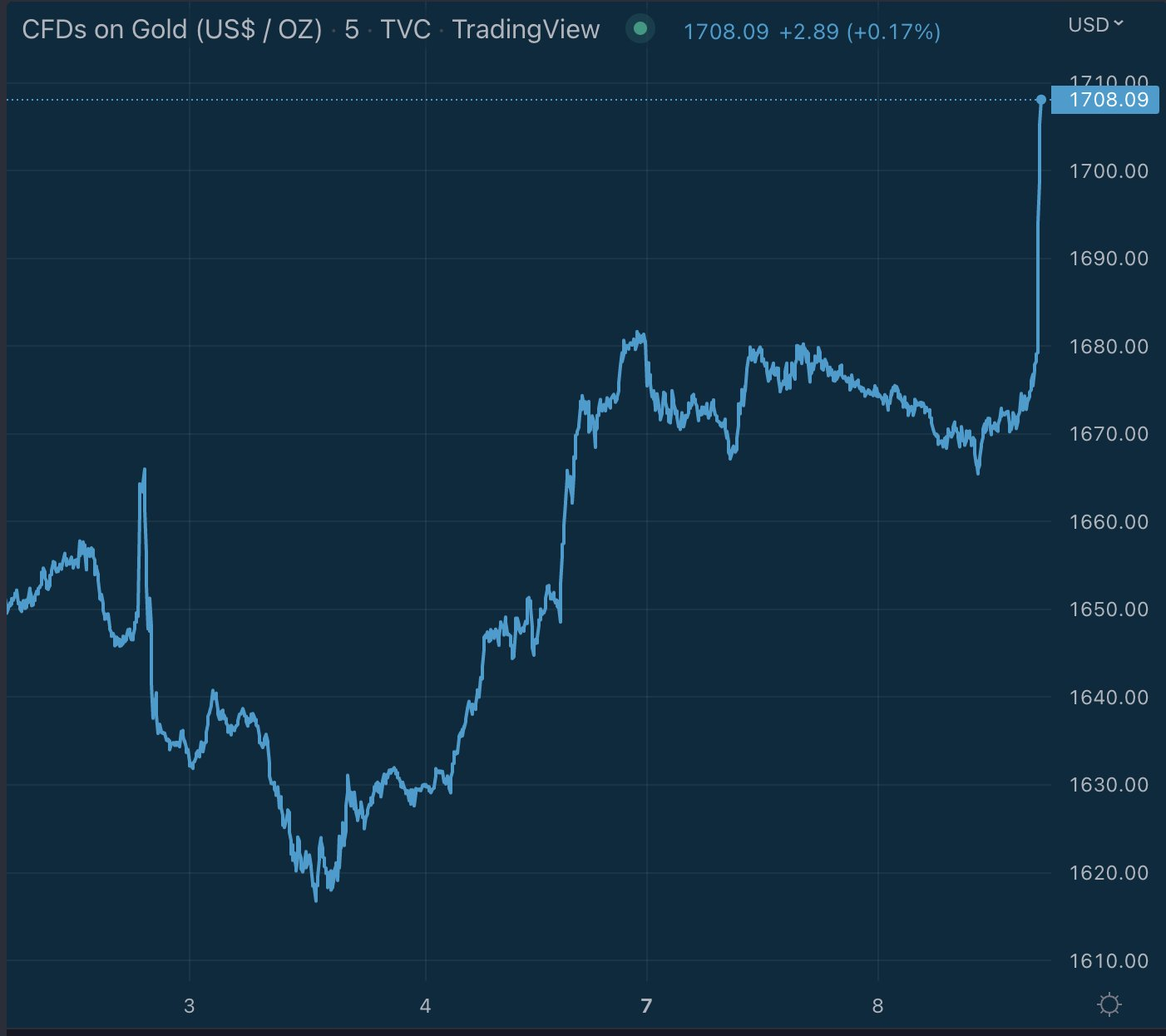 Both Gold and Silver seem to be breaking out to the upside during all this, and guess what might be breaking down to the downside? 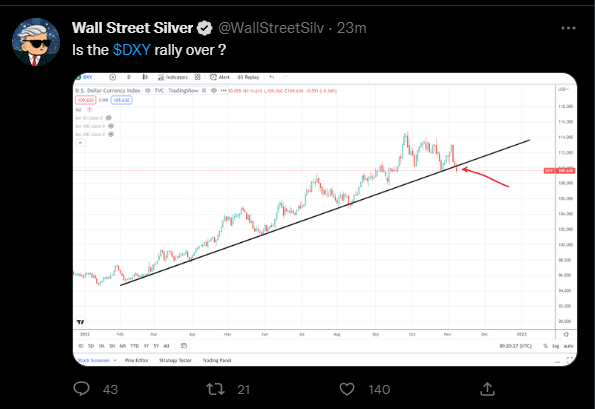 Yep... the value of the dollar.

All of this lining up on the same Blood Moon.
Truly a sight to behold.
To be fair the crystals girls told me it would be a wild one.

5/ Here's what I think happened:

Once vested, all tokens were sent back as repayment.

And thus, FTX, a company that probably should have gone belly up when everything else did, was able to delay the process for several months. 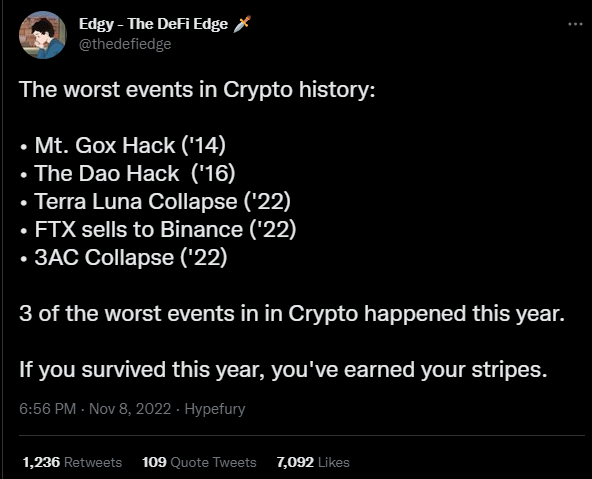 I mean I'm not sure if I agree with that assessment exactly, but it has been one clusterfuck after another. Luckily, the silver lining here is that this will almost certainly lead to a bottom with a likely V-shaped recovery considering the speculation and low market cap. Many bears are selling here and looking for targets like $13k and $10k. Not gonna happen. Said it before and I'll say it again: I think the bottom here is $16k. There's a wild amount of buying pressure here. I even saw a Tweet that said, "Feels good to buy FTX Bitcoin". lol. harsh. but deserved.

Their entire business model depends on a steady inflow of crypto noobs who don't know how to access the better options.

Sadly, there aren't many better options in the US. Especially if you are starting with fiat. Downturn aside, I honestly trust Coinbase more than I trust Crypto.com. Although neither are my absolute favorite.

Jeez - I hope Coinbase doesnt go under, I have about $5 worth of crypto on there !

This blood moon, while volatile and destructive, just signaled the beginning of the next bull market

Many bears are selling here and looking for targets like $13k and $10k. Not gonna happen.

I dunno... I had such confidence a while back as well and look where we are now. I'm an idiot. Is that a bottom signal? :))

Hey @edicted
I guess not the first time your predictions came true.
So did you only predict or did you short anything following your prediction before or during the collapse happened.

Crazy events and all are falling while some are playing games with the market. I wonder how many earthquakes like this the crypto markets can take and what will happen from here...

Blood moon sure wants some blood..

Indepth analysis.. really don't know what to think anymore...but I'm hopeful... stacking as much as I can...

A massive cluster puck has occurred.
Steady Lads
Now the most famous last words ever.
FTX had most of us fooled into thinking he was a wise man, unleveraged and unstoppable.
Who else are we wrong about?
Whats the next shoe to drop?

V shapedrecovery?
I hope the God here’s you.

Just as I do believe that the current market price of any coin doesn't determine the use case hence speedy fall in price might hurt yet it's not an unexpected fact .
For me the community love and use case is the vibe.