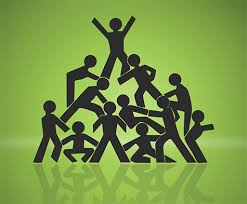 I say the word 'synergy' a lot, especially as it pertains to crypto. This is a word that has been bastardized by the corporate word. When I say it, it makes my girlfriend cringe and she will say things like, "That's not a real word." Oh, it's real.

Just because Corporate America has taken this concept and twisted it into a toxic money-making buzzword, doesn't destroy the value of the concept itself. We can still build community and reclaim control of currency and point out the 'synergy' of it all.

The whole is greater than the sum of its parts.

This is the definition of synergy. If you say synergy, people cringe, but if you say 'the whole is greater than the sum of its parts'... wow that's very wise. The disconnect we see when triggering words get used too often in the wrong context is... fascinating.

In the corporate world you might categorize buying out an entire supply-line as synergy. Say you own a farm and make your money selling food to distributors. Well, what if you BOUGHT one of the distributers? This is how, in the corporate world, synergy become synonymous with "toxic monopoly". If someone buys out all parts of a business, then cuts costs to drive competitors out of business (or buys them out)... Hm, yeah... we can see how that 'synergy' gets ugly pretty quickly, which is why the word is so cringe these days.

Synergy also exists in biology and life itself. None of your organs matter without the entire body being intact. If your heart stops, every organ in your body will die. Same with any other critical organ (of which there are many).

It's also worth noting the trillions of useful symbiotic bacteria in our bodies. Most of the time we think of bacteria as gross germs that we need to kill. That's not entirely accurate. There's a lot of bacteria that keeps us alive, and we keep it alive because it keeps us alive. Synergy. 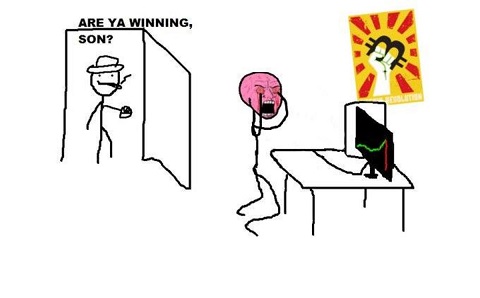 In crypto there's a crazy amount of synergy because private money/ledgers has ruled the word for so long. There's so much corruption and systemic failure floating around in the current system that it doesn't matter how inefficient crypto is. Crypto farms trust, and trust is the scarcest commodity on the planet at the moment (or rather, truth).

The synergy of crypto allows us to fund projects that could not be funded within a system in which the underlying currency is controlled by a foreign party. For example, I have 140k Hive powered up. Not a lot when compared to the total amount of Hive out there. Just a small sliver.

However, what happens if I created an app that doubled the price of Hive? With a little innovation and luck any developer on Hive could achieve this during these early stages. I don't even have to capture any value for myself (which is the problem with corporate America). Not only have I doubled the value of my own stack, but I've doubled the value of everyone's stack.

Diminishing returns are the opposite of synergy. It's the system we live in today; a culture of consumption and waste; a culture of war and suffering. There's very little synergy in the world today, but crypto can change that. Ironically, synergy within a corporation is a diminishing return to society as a whole. Just another reason why the word is so triggering to many.

Early Bitcoin adopters are willfully ignorant about the situation at hand. Bitcoin spawned thousands of open-source products, and yet Bitcoiners want to spread around propaganda, call them all shitcoins, and claim that Bitcoin is the only centralized option for all money. The disconnect from reality created by greed is a thing of legend.

This is unfortunate, but also predictable. If we could get more people working together, that'd be great. How do we get from here to there? Lot's of work and battle-tested solutions that prove that altcoins are symbiotic with Bitcoin. No one said it would be easy.

Crypto is full of scams and empty promises, in addition to infinite potential. The vast majority of no-coiners out there have a hell of a time separating the two, and they just assume that it's all a scam. Unfortunate, but that's just the way of things. The ultimate factor here is time. Keep grinding.

Words have meanings and they are often important. It helps with understand of the basics. Sadly few take the time to truly understand what is being discussed. This is how ideologies or frameworks built upon total bullshit result.

So when you are attacking the Bitcoin maxis, you simply are pointing out their complete misunderstanding of central banks, how money is created, and what the monetary system is.

Ultimately it comes down to control and people buying into their own belief system without questioning it.

Please sir, bacteria of symbios will be bad in your sir.

I still am amazed how shitcoins are still holding on and people are investing in them. When shit hits the fan all these so-called investors are complaining and people turn to the need for regulation, but let's call it for what really is in most cases: stupidity. Probably this will still happen as the odorless pumps and dumps are fueled by these "investors".

Synergy also exists in biology and life itself. None of your organs matter without the entire body being intact. If your heart stops, every organ in your body will die. Same with any other critical organ (of which there are many).

It's the same with an ecosystem. Kill off one species, and you are going to lose others as well. Many things are connected in ways that aren't apparent at first.

This post has been manually curated by the VYB curation project

Synergy is also how all the parts of an instrument work together to give you a particular sound and even when you use the same woods, you can get different results. Sorry, felt like I needed to provide my own example.

It feels like scams with crypto are everywhere. There's a lot going on in Venezuela regarding that particular thing. So whenever I see someone talking about getting money through this and that, I'm like "sure". U91 took a big chunk of people's savings. But easy money goes away easily.

I'll keep doing my posts and instruments as both activities work in tandem. Maybe I'll find something extra in due time. Until them, I'll keep the synergy between my two incomes going.

The vast majority of no-coiners out there have a hell of a time separating the two, and they just assume that it's all a scam.

Heck, the vast majority of coiners can't separate the two either.

Just look at Dan's endless replies to proper crypto industry heavyweights who can't wrap their head around the merits of DPoS.

The difference in this equation is where synergy has plays an active role . The interaction or cooperation of two or more organizations, substances, or other agents to produce a combined effect greater than the sum of their separate effects. A blockchain like Hive for example ticks these boxes .

Very insightful always learning from your post @edicted thanks for sharing