NEAR PROTOCOL: A SCALABLE MULTI-CHAIN FUTURE FOR DAPPS

Today we are going to talk about a blockchain platform with a zero carbon emission certificate, which focuses on promoting the web environment for the development and better positioning of dapps (decentralized applications).

Positioning itself as one of the most promising layer 1 blockchains and one of the top “Ethereum Killers”, it offers ultra-fast transaction speed, paltry fees and a concrete possibility of a multichain crypto environment.

With its main network launched in 2020, the NEAR protocol is a Layer 1 blockchain based on Proof-of-Stake - enabling diverse applications to be coupled or developed on top of its structure - created by the Near Foundation, an independent entity whose mission is to align with the long-term improvement of the Near ecosystem.

Open source, the protocol is powered by a worldwide community of over 100 developers and researchers.

Through a technology based on simplicity, security and scalability, Near promotes a friendly environment for developers, with the availability of tools for multi-chain interoperability and the possibility of scalability.

The network sets out to overcome some of Ethereum's limitations, including low throughput, low transactional speed, and poor cross-compatibility.

The NEAR Protocol articulates addressing the main limitations presented by previous networks: scalability, interoperability and security with the promotion of a friendly environment for developers and end users.

Tailoring its throughput to efficiently ensure transactional processing agility, the Near Protocol enables network scaling through its nightshade framework, a sharded framework that works with individual sets of validators that can process transactions in parallel in the different fragmented chains.

This set of validators processes transactions in parallel across multiple fragmented chains and improves transactional capacity. Each chain generates “pieces” of the next block to be assembled to finalize the transactions, streamlining the process and, consequently, reducing its costs.

This materializes in a TPS (transactions per second) rate on the Near Protocol network of +100 thousand today, number 10,000 times higher than the TPS of the Ethereum network, which today houses much of the Dapps ecosystem.

Its doomslug consensus mechanism also contributes to the speed of transactional processing, as it promotes cooperation between developers who take turns processing blocks rather than directly competing.

NEAR PROTOCOL AND THE DEVELOPERS

In order to attract developers, Near Protocol promotes the pillars of simplicity and interoperability as components of a developer-friendly network environment, together with the availability of development tools.

In addition to the possibility of built-in-bridges, scalability and transactional speed, Near also offers the developer the convenience of creating in more widespread languages ​​and also allows passive income with the receipt of 30% of the fees generated on each smart contract of its developed apps (result of the platform's burning fee policy, in which 70%
of fees are burned).

As for interoperability, if on the one hand the construction of the Near Rainbow Bridge (which establishes the connection between the Ethereum-Near network) facilitated the connection of ERC-20 tokens to NEAR, it also paves the way for the interoperable functioning of the dapps of the Ethereum network, being able to carry out an eventual migration to the Near Protocol with the support of the Ethereum Virtual Machine (EVM) and reinforced by the inauguration of the Aurora Bridge on the NEAR Protocol platform at the end of 2021. 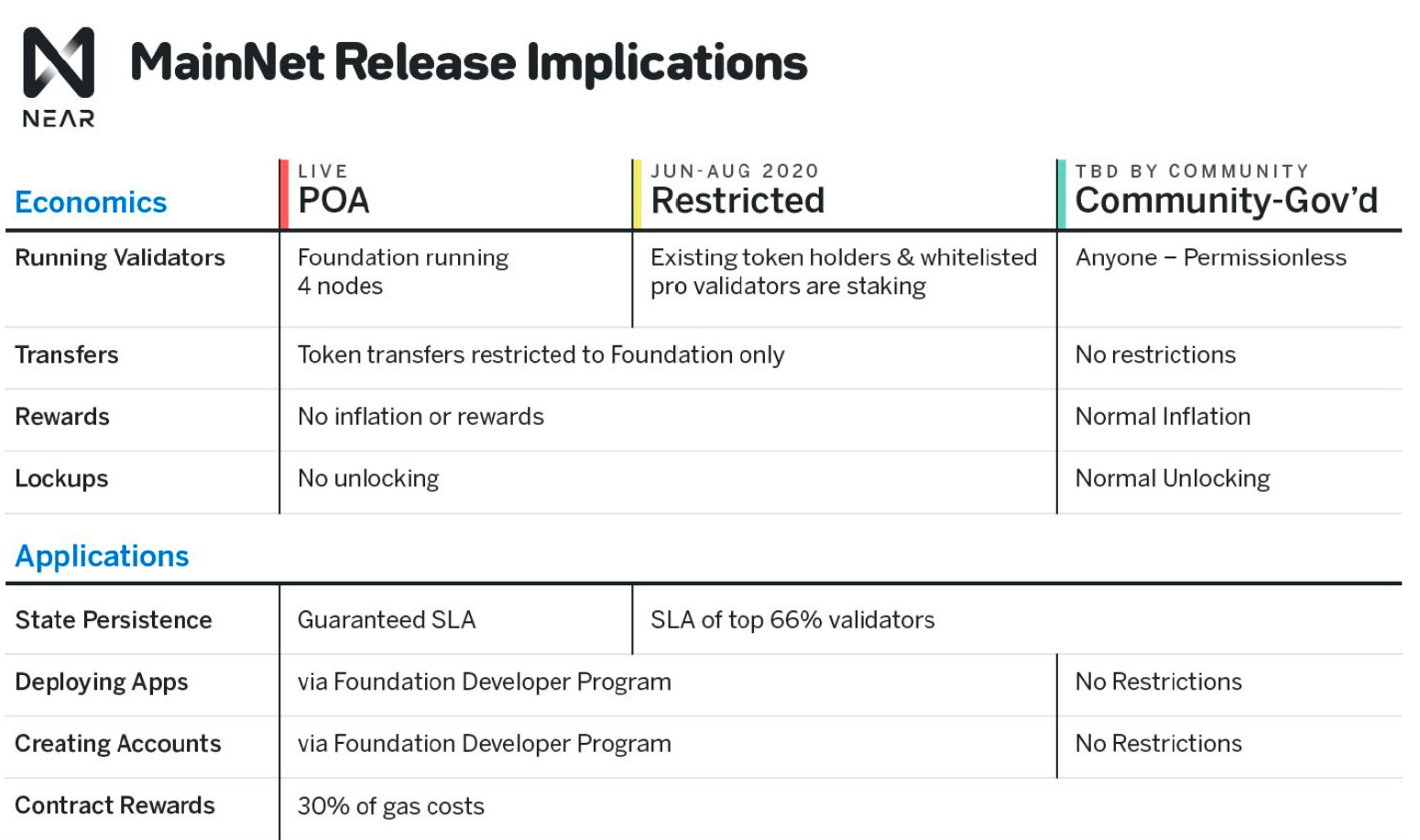 The native token is NEAR and is used to enable the participation of its holders in the governance of the NEAR Protocol platform, through the governance forum tools.

Token holders: validators, application developers, community leaders, among others, are responsible for acting on consensus on the technical governance of the protocol.

The token is still used to power transactions and smart contracts on the NEAR Protocol. In addition, the protocol operates under a proof-of-stake regime, which allows tokens to be locked on the platform.

STAKE FARMING ON THE PLATFORM

All NEAR token holders have the opportunity to earn staking rewards, whether validators or simple token holders.

With the production of each block, validators receive tokens at an inflation rate of 4.5% per year. Token holders who do not want to be validators can bet on fee pools, earning rewards for these bets according to the percentage relative to the total bet on the platform.

The total supply of NEAR tokens is 1 billion. The distribution is as follows: 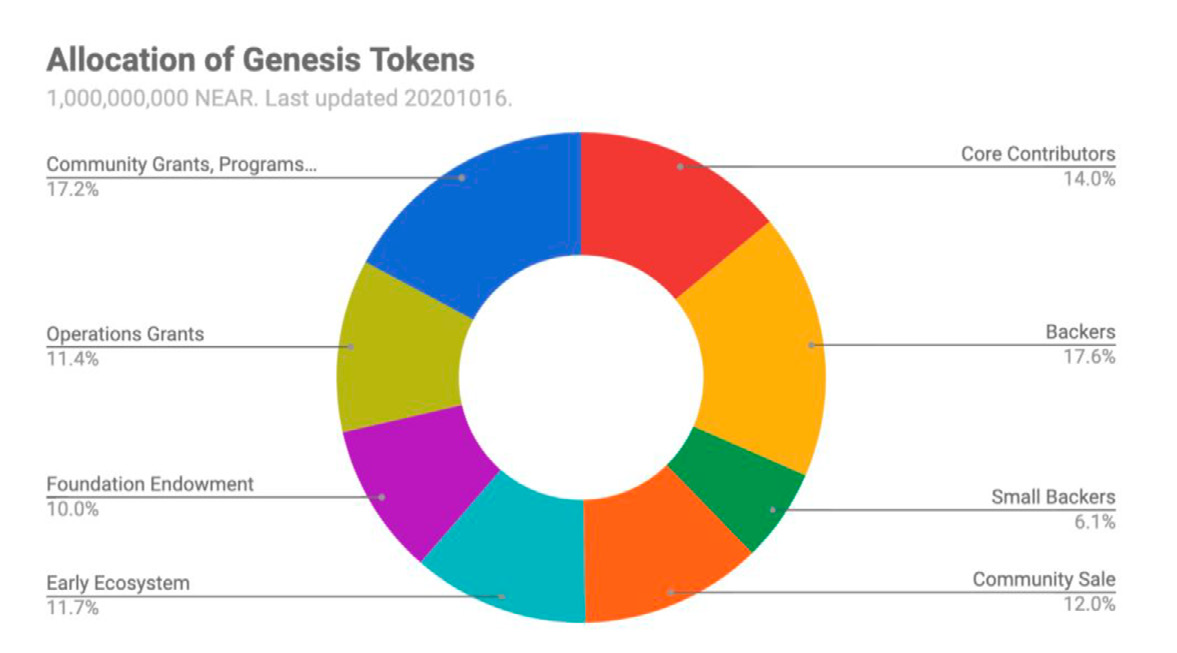 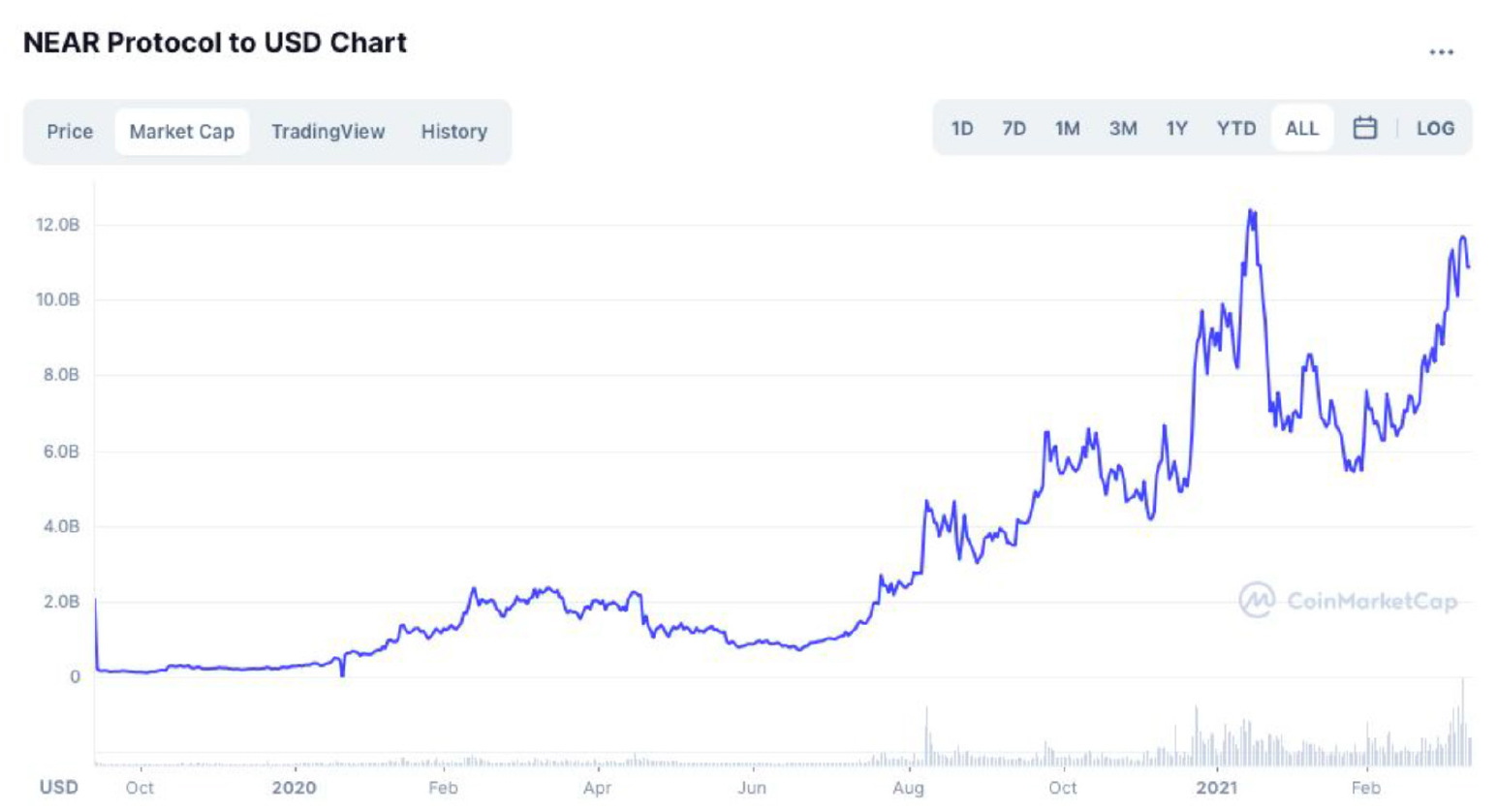 EXCHANGES WHERE TOKEN NEAR CAN BE TRADED (SPOT AND PERPETUAL)

With more than 100 active validators, the protocol has a TVL (Total Value Locked) in the order of US$356 million.

The daily transaction count has increased as a result of the increased adoption of projects in the NEAR protocol, which was facilitated by the strengthening of interoperability between the NEAR and Ethereum networks and with the arrival of the Aurora crosschain bridge in late 2021. 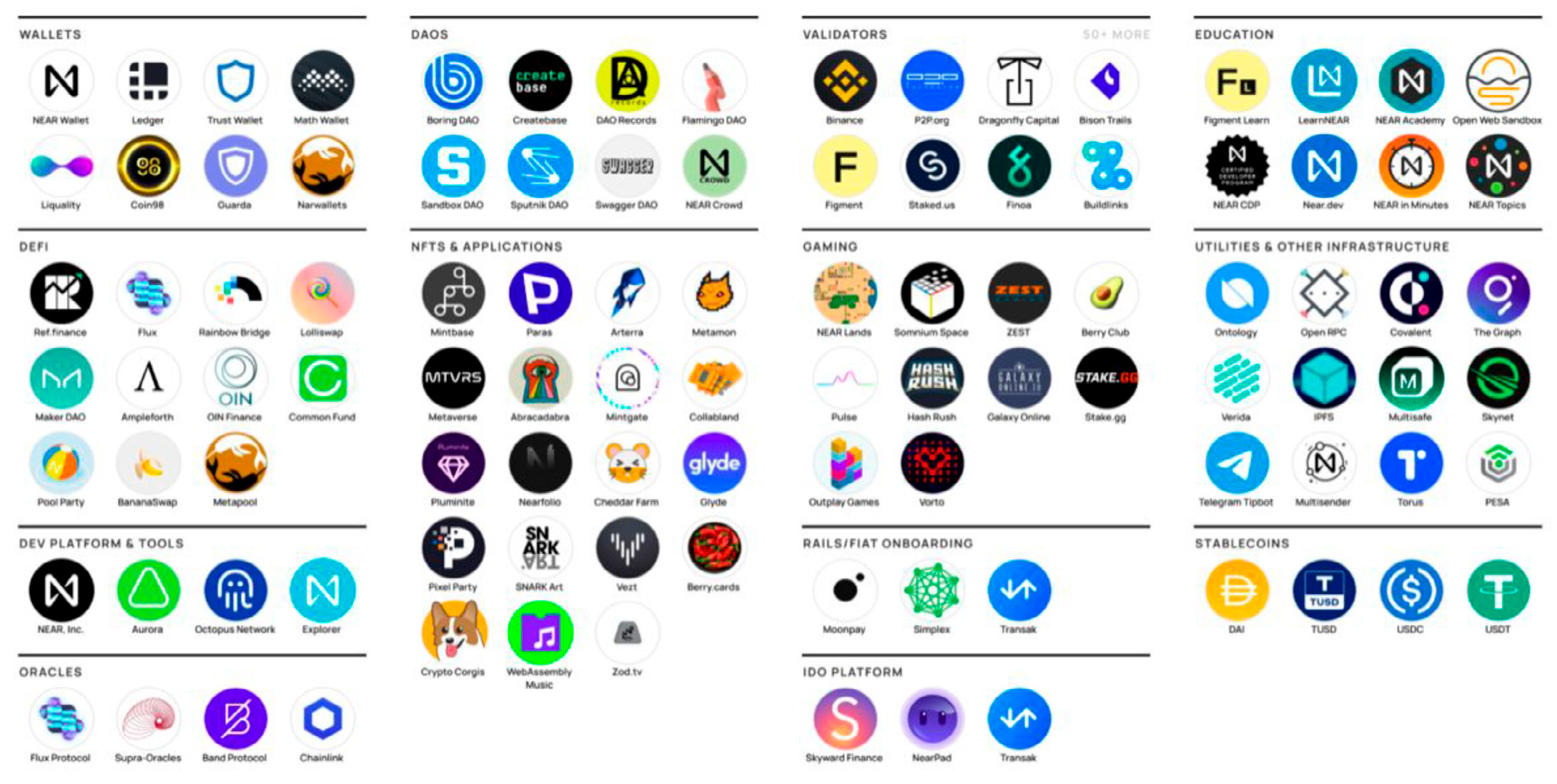 The NEAR ecosystem incorporates applications from the most varied categories. Among the applications and blockchains already integrated into the NEAR network are dapps such as wallets, DAOs, validator applications, games and those related to NFTs, their minting and trading, among others.

NEAR is a protocol with a proposal aligned with the pains of the market, which has a carbon neutrality certificate and can assertively address the construction of a more scalable and efficient crypto environment.

The protocol has been successful in addressing the main needs of the blockchain world (interoperability, security and scalability) and as a result it is established among the most promising ecosystems from the point of view of rapid expansion. 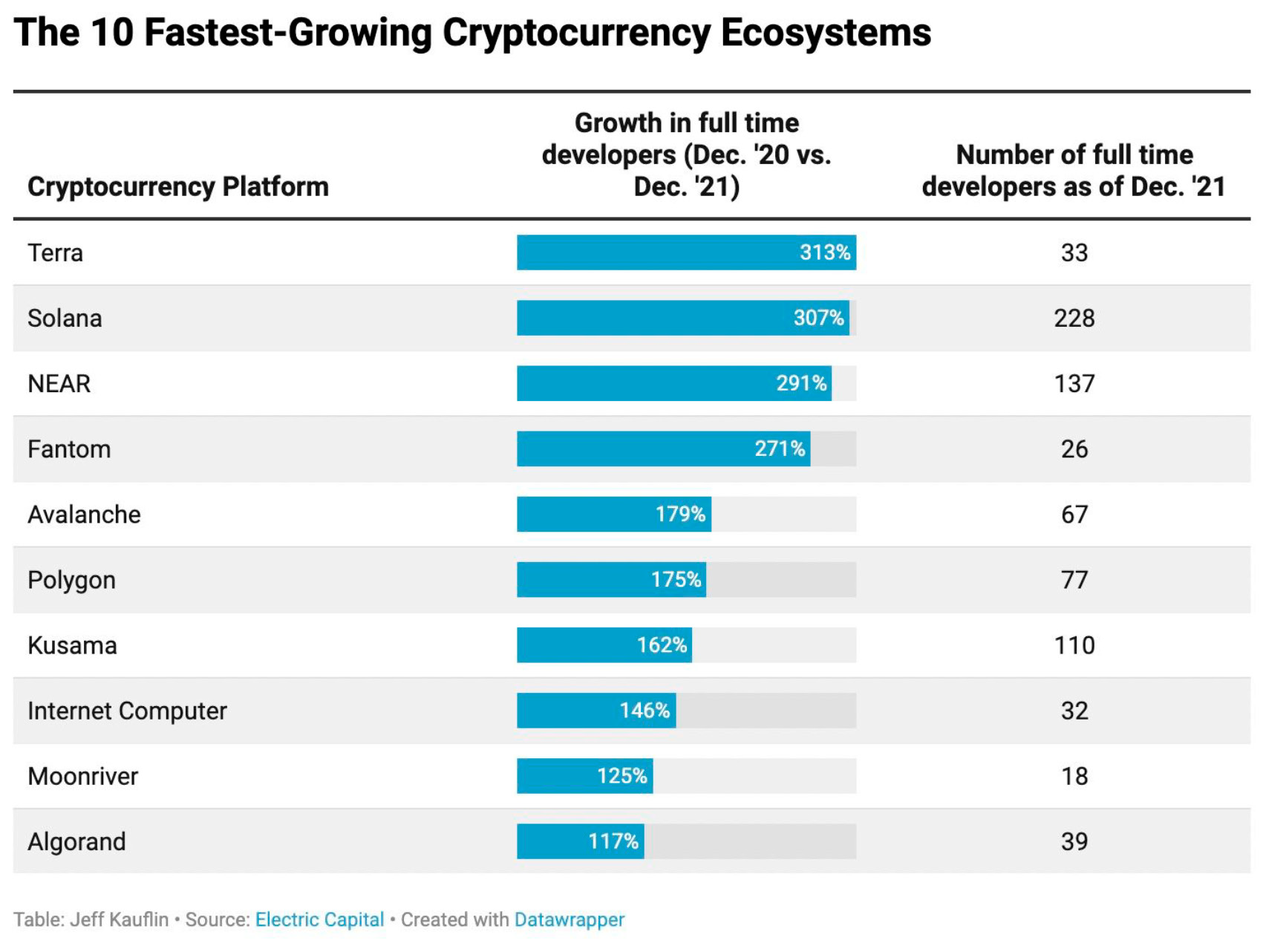 NEAR ON THE INSTITUTIONAL INVESTOR'S RADAR

In January of this year, in a funding round, the protocol raised $150 million from investors, including players such as Dragonfly Capital and Circle Ventures.

The NEAR blockchain has managed to stay in focus. Not just an expression of institutional investor agitation regarding cryptocurrency-related startups, blockchain is positioned as a great bet for platforms supporting the decentralized web, which is emerging as a blockchain of the future.

In the first week of this month, NEAR Protocol raised in another round of funding, US$ 350 million, an amount made up by giants such as Tiger Global Management.

NEAR is a protocol with a proposal aligned with the pains of the market and which has already made clear its prominence and its technical-operational efficiency as a decentralized protocol for the development of dapps.

Its emergence, like other similar products on the market, was to address the gaps left by the Ethereum network in solving the blockchain trilemma, taking advantage of the heating up of DeFi integration.

yes! this exactly why i'm so bullish on Near! Do you have any recommendations of where to onramp fiat to Near?

In my case I use Binance to buy Near.