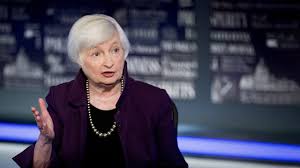 During Yellen’s confrontation hearing yesterday I heard some troubling and inaccurate statements about crypto. The two main points she made are the following:

Many of us know that’s not true. More crime and terrorist organizations are fueled by fiat currencies.

Her comments come amid a surge of interest in Bitcoin and other cryptocurrencies. BTCs price has soaring around 300% in the last year. This is just another round of FUD by governmental agencies that don’t fully understand the space. As many on this platform know XRP has been in the SEC’s crosshairs and many US based exchanges have halted trading.

On the back of this news we had a board market sell off. This selloff has now put many coins at critical technical points were we could get a substantial pullback or confirm the support and continue on with the bull market.

I think large investors are using this type of FUD to trigger sell offs making it so they can buy up supply at lower levels. This cycle has occurred multiple times during this run and I think it will continue. I’m holding and have limits to lock gains, but due to my averages I’m not concerned until we get to around a 20% drawback in most of my holding.

Thanks for bringing this up. Yellen seems problematic. Let's hope her position can become better informed.

I think she will be good for the overall economy, but I did not realize she was this misinformed about crypto. Stocks should do well under her.

A fair point. I'm still learning about her background and positions. Have you heard anything about who will be in as Comptroller of the Currency?

Last I'd read was this:

New [Acting] Comptroller of the Currency announced: Will he be as good for crypto?

I have not so I can't speak in the subject.

This may be the way she feels, but I don't think she will get a lot of traction with this. As we have said in the past, it isn't in the institutions best interests for it to drop too low besides the fact that they want to buy more. When the time is right they will be lobbying hard for favorable stances on at the very least BTC if not cryptos as a whole. Fingers crossed anyway!

I agree with the institutions involved their will is what is going ton happen. I think it was a good trigger to cause a sell off to accumulate. Those tricky bastards...

Haha, yes they are!

Don’t worry she is a closet Bitcoin supporter.

If larger investors are so are the regulators.

Its got nothing to do with terrorism. They always pull the national security card when it is a threat to their system. It is a threat to the dollar, and becoming a serious situation of de throning the dollar and upsetting the status quo. They want tax and that is it, to get tax you first have to have a grip on it. Currently they don't and its also not her personal opinion, its just the position of speech she is in.

I think you are right it's threat to the current systems and we can't have that... I'm just waiting to see the balance sheet to see they have been buying when they cause drops...