While yesterday I wrote an article (Link) on how it's now a great time to start playing Splinterlands, the reality is that the current system for Bronze League is completely broken and needs fixing. Here are some thoughts and possible solutions on the issue.

There is always an optimal way that the game ideally should be played and an optimal way for it to be played to extract as many rewards as possible to get the best return on investment. While in a perfect world, both these ways are identical, in reality, this is never really the case and it's always a cat & mouse game. Previously having a ton of bots playing with Starter cards was the most optimal way, now this is the meta.

This method optimizes Rewards like crazy and requires little to no investment right now which is totally against the point of the game. 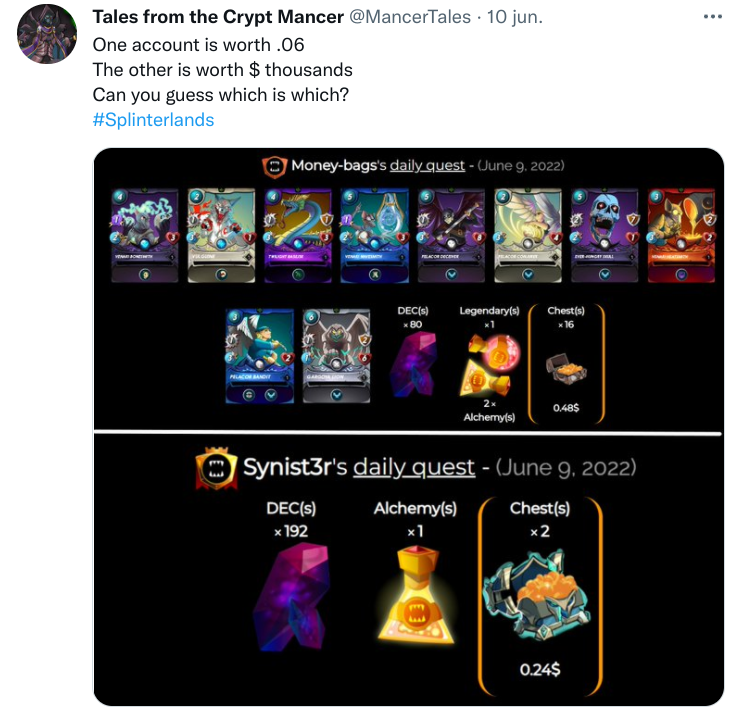 Right now it's mainly real players that do this often delegating cards from their main account they don't need on the day because of the daily focus. If this system isn't fixed by next season, an army of bots who saw their rank get back to bronze will start doing this making the printer of reward cards go totally crazy.

Legendary Reward Cards for as low as 1.27$

The reality is that the team highly overestimated the adoption of the game printing way too many reward cards. Now around 10 months into the current reward set, 50%-60% of them have been printed and the rate has increased by a lot since the new ranked rewards system was introduced.

The problem they wanted to fix with the new rewards system is that there were not enough incentives for players to build their collection and rank up. The way things are going right now it has gotten worse even though higher-ranked players are getting more rewards. It's just so easy to get bronze chests that it doesn't weigh up. There is also the issue of the daily focus which forces players to use just 1 splinter each day forcing that upon the rules which is great for those that rent day-by-day but it sucks for players that have a pretty complete collection. Things that can be done:

This system would allow players to get reward points just by playing optimally and it would give high incentives to have a balanced collection. The downside is that it will be a lot harder to get rewards for players that are renting probably hurting that market

Creating an optimal balance between economy and fun in Splinterlands having all the incentives right to align what should be optimal play with what earns the most rewards is a crazy challenge. Right now after the new rewards update, there seems to be a massive exploit that needs to be fixed sooner than later. I'm sure that this will get fixed as the devs have a proven track record of finding smart ways. It's going to be interesting to see how this plays out in the weeks to come. In the meantime, everyone is able to get crazy high rewards with minimal investment in bronze league.

Salute legend for the effort you've put in this!

I like this multiple accounts. There only thing is playing one takes a long time, difficult to play some more. And how do I open another account. Because I see that you can switch accounts !

Yeah, that's why I like the idea to have some kind of reward share multiplier for players that are really invested in the ecosystem. The required daily play time right now is just a bit too much. I guess many will be opening extra accounts to get the rewards, by next season they likely will be fixed and gone though.

Meanwhile I mistakenly did the opposite... 😅 I finished last season in Diamond II, dropped down to Silver I and stayed there a few days, meaning I won almost zero chests despite winning a lot of games. This has been my strategy in the past seasons because I could then rent out almost all my cards and get a good return on that, then climb back up to diamond the last day or two so I could get the season reward. If I had been thinking ahead, I would have realized that wouldn't work anymore this season. Now not only have I gotten very few chests, but with the rental market being so unstable this season, my income there is down 80%. Whew, double whammy...

Anyway, hope they fix this new exploit that you mention in this post.

@thepimpdistrict 52
8 months ago
You must be killin' it out here!
@dbooster just slapped you with 5.000 PIMP, @costanza.
You earned 5.000 PIMP for the strong hand.
They're getting a workout and slapped 2/2 possible people today.

Yeah, I'm also somewhat in the same boal with Diamon Chests in Gold. I'm not sure if I will move up to Diamond this season but instead get more chests from goal league next season. I don't really have the time to open new accounts tapping into the exploit that likely will be fixed soon anyway.

I think increasing the chest level as you earn more rp with maybe one level delay would work. Many players are not advancing due to the triple cost of the next level chest. As we were warned play only at your level.

This mechanism makes it possible to get so many chests in Bronze, I really hope they showhow give bonus % for players with a balanced collection and to those that hold a lot of assets and an extre incentive to do so.

They do cap the number of chest at 30 per day. Which equals about 10 cards or $.10 value. So they are not losing that much. The amount of time to make $.10 really shouldn't be worth the effort. I don't think it is that big of a problem.
!PIZZA