@costanza 73
about 2 months ago
LeoFinance

I am getting more serious about playing the Sorare.com NFT Fantasy Football Game this new football season and will be keeping track of my personal activity in this series of posts.

My overall score this week was similar compared to the last 2 but I got pretty unlucky that Lemajic started on the bench with Young Talent Fofana getting his chance for AA Gent. This is one of those things that was nearly impossible to anticipate and it also shows how important it is that a player starts and plays most of the match. 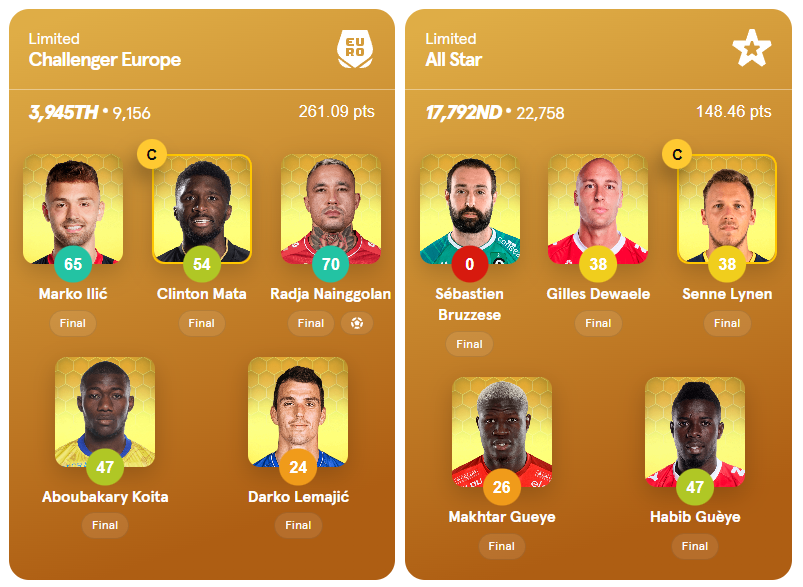 I scored 261.09 points this week faling short quite a big again to be in the money. With more player options to choose from it will now more be a challenge to select the ones that combined give the best score. I guess the opponents and general form of the team are key aspects to take into consideration. My secondary team still is not competitive as I have no goalkeeper there that plays and the general competition is also a lot higher. The number of players in the Limited Europe Challenger league is also going up rather quickly but the places that give a price also increase accordingly.

I picked up 2 new player last week, 1 in anticipation for potential use later down the line and another one to potentially trade for a profit: 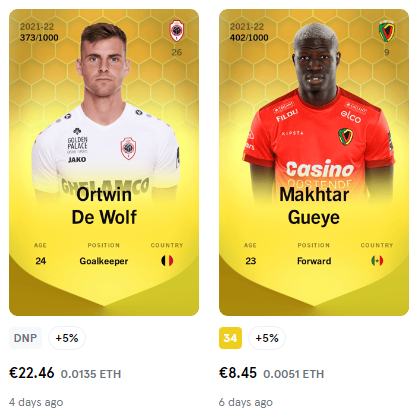 Makhtar Gueye: I already owned him in my main collection but bought another one as I believe I'll be able to sell him for quite a bit more later down the line. He is a young tall strong centrum striker that in the past already had seasons scoring a ton of goals (12 last season / 11 the season before). He's got a reputation as a troublemaker and currently is always starting on the bench coming in near the end of the match during which he had some good chances to score already. He's the profile that a lot of teams could use including Oostende and I guess it's a matter of time before he picks up his form or potentially gets a transfer. Kompany had him on his radar for Burnley also. So Solid Profile with a track record of being to team top scorer but on the bench now and a bit out of form which makes it a cheap player to potentially sell later on for quite a bit more.

Ortwin De Wolf: So goalkeepers that play each match by far are the most expensive players especially the ones in teams that also play in Europe. Aside From illic, I'm not really willing to pay up and rather go speculative at cheaper prices with upside potential. Ortwin De Wolf is the 2nd goalkeeper of Antwerp and I rate him too good as a 2nd goalkeeper. I don't expect him to play anytime soon this season but he is good enough to replace Butez in a similar way to Roef who was the 2nd goalkeeper of AA Gent now is the #1 worth 264€. I don't see it happen anytime soon and maybe at best he will play in 1 or 2 cup matches or potentially replace Butez if he would get injured or perform so good to get a transfer.

I had to throw Lemajic out of my team since he's clearly not the #1 replacement in the mind of his coach for Tissoudali. Instead, I put in Habib Gueye who is the centrum striker from Kortrijk and unless injured always is a starter that plays most of the match and is most likely to score. I'm not so sure on who to make captain as Club Brugge hasn't exactly looked all that sharp in the defense. I still see Mata as an overall solid player. Ilic has scored a lot of points recently but Kortrijk is a +1.25 underdog this week, Nainggolan might not play due to the busy schedule, Gueye remains somewhat of a question market and Koita is in ok form but plays against Anderlecht as the underdog. So overall, I'm not expecting too much from the team. 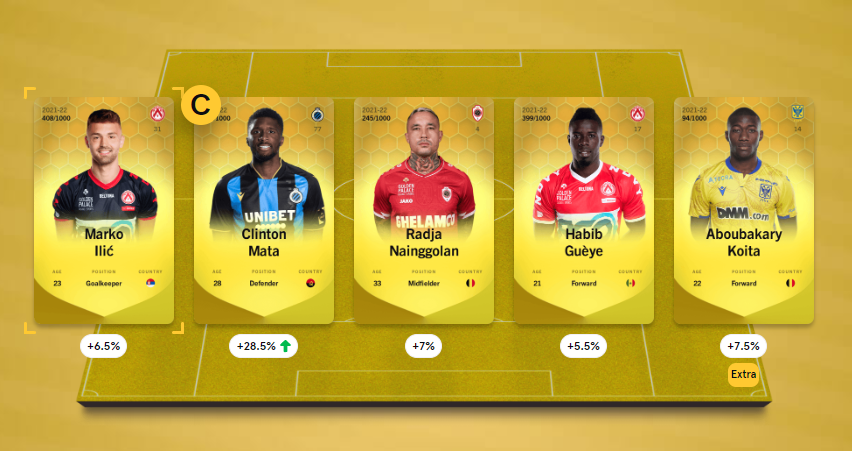 My backup team is more about giving players XP to increase their bonus percentage. De Wolf from here on out is in as the Goalkeeper which is a step up from Bruzzeze as he's the 2nd instead of the 3rd goalkeeper. Gueye & Lemajic at the moment are not starters but they almost always come in. 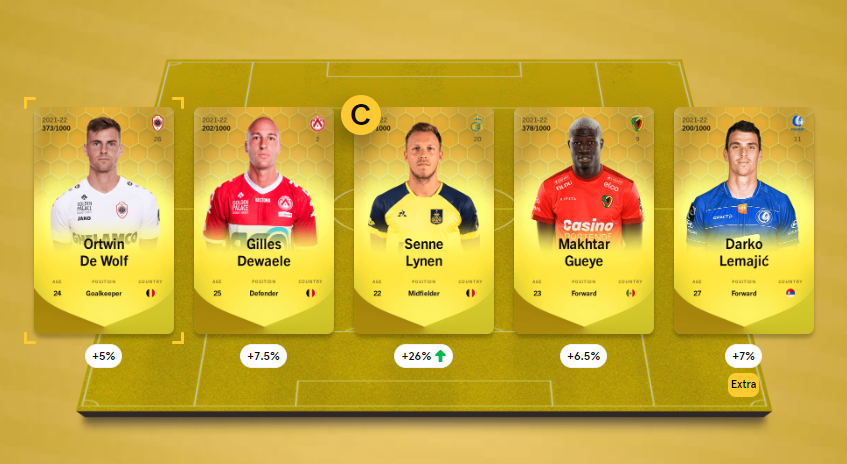 I will keep track of my trades and see if I can make some actual profit this way. I don't think there are any trading fees at the moment which makes it quite interesting.

I'm back down slight a bit on my overall team value based on how much I paid for it and haven't managed to get inside the money yet. I also still just barely have gotten started and plan to play this games for years to come which eventually should produce some returns & earnings. Anyone that is interested in joining me on my Sorare Journey, Using my Sign-Up Link will get you a free Limited card on buying once you collected your 5 first cards.

I'll bring an update next week with the results and how I'm moving forward.

Crypto & Blockchain-Based Bookies and Exchanges that I'm personally using as they allow anonymous betting with no KYC or personal restrictions...

Hey mate, what's your thoughts on the SPL venture into football? Potentially a rival for Sorare?

Personally, I don't get how the NFTs work for football. What happens to the NFT if the player gets transferred to a different league? Can you still use them?

@costanza 73
about 1 month ago

I don't see SPL as a rival to Sorare honestly, Sorare actually has the rights from the leagues and can use team names, logos, players, ... SPL only has the rights for the team names of MLS players. I also kind of assume SPL will be more a battler-style game where they just use the player stats at the end of the season to make the cards instead of a football fantasy game and I wouldn't be surprised if the NFT's were cartoons of the players instead of pictures. Overall not that many details are known about it since they basically still need to start making that game.

For Sorare, as long as a league is part of the tournament, players that play in it will get points. Only players that are part of leagues where they have the licence are being put up in auctions or given out as rewards with a limited number each season of 1000 Limited / 100 Rare / 10 Super Rare / 1 Unique. All leagues that they support give players points for the specific tournaments they are entered. 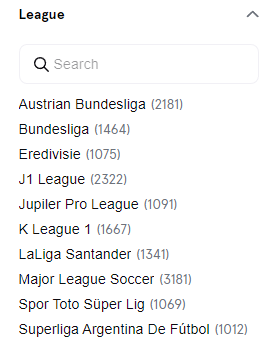 For example, Bundesliga is licensed and if you bought Haaland last season, you will be able to put him in your team and score points as EPL is supported. There is a risk of players getting injured or being transferred to a country that is not supported. I'm not sure exactly but I think they plan to give a use-case for retired players also.

I play the game with an eye to 'buy low & sell high' not as buy the best most expensive players to rank high and potentially get rewards that way wich comes with quite some risk and is more a whale game.

It took me some time to really get into it but now I'm loving Sorare. It adds so much fun to watching games and following the league. I also believe I won't lose money over time and potentially could make a profit.