Sorare.com | Very Close To Another Win!

I got more serious about playing the Sorare.com NFT Fantasy Football Game this new football season and will be keeping track of my personal activity in this series of posts...

I continue to really enjoy this game and need to keep myself from buying some more expensive players in order to get a bigger chance on competing for the prizes. This mainly because my main goalkeeper Ilic is no longer happy in Kortrijk and doesn't play right now. I did get extremely close to another Under 23 spot where there is a prize payout only needing 40 on the last match having Koita from Stvv who is in form and was starting in the team. He ended up a highly controversial red card after a VAR intervention as he unintentionally hit the leg of another player while in possession doing a dribble. All this while my other potential striker for that team scored 60+ points which would have gotten me way up in the rankings. That was highly frustrating but at the same time brought an extra dimension to the match since the stakes were 'high' at least that's what I felt like going into that match. 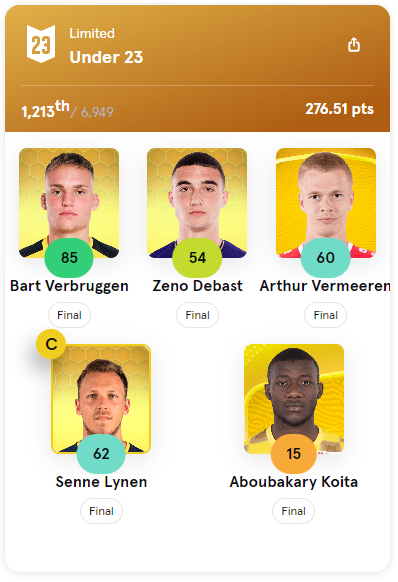 I for sure have a team that has the potential to be competitive in this competition mainly thanks to the fact that I picked up Verbruggen while he still was the 2nd goalkeeper. There was only 1 week in the Under 23 as mid-week football didn't count for that competition 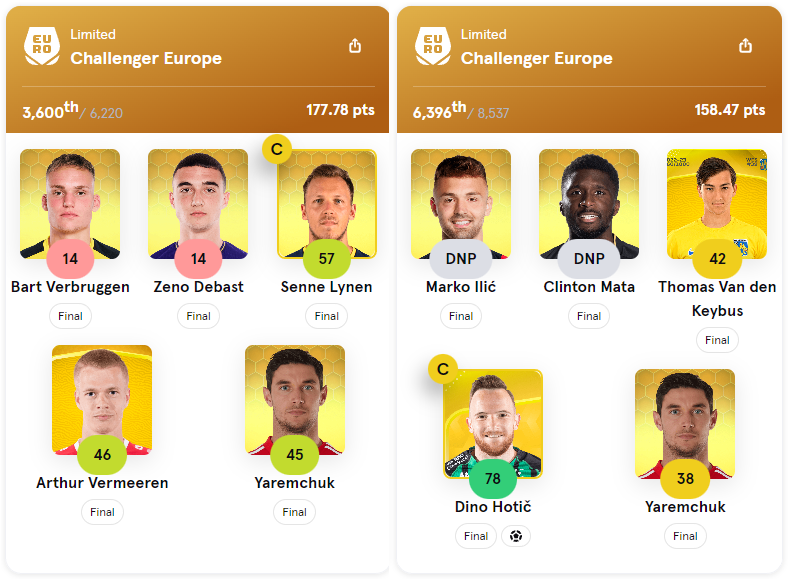 I lack enough players to fully put in a competitive Challenger Europe Competition team. My only Goalkeeper wants a transfer and isn't playing, some of my players are not sure of their starting 11 place (Mata) while others are injured (Odidja / Maertens) and Yaremchuk who currently starts is just completely out of form getting huge chances but somehow missing all of them. So no real luck the past 2 weeks in this league

I need a lot more players especially with the new upcoming competition but for now I remain in value hunting mode buying a couple more players. 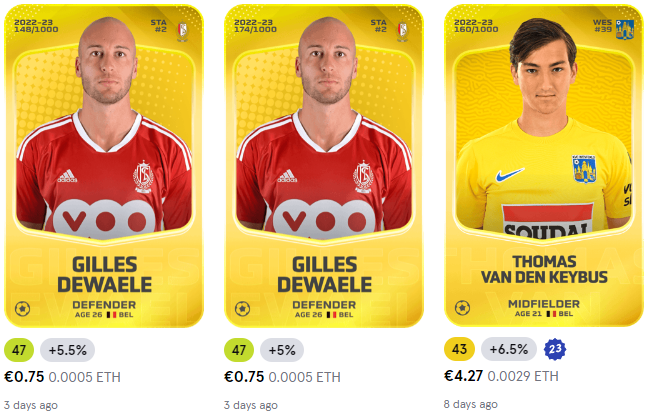 I have Thomas Van Den Keybus on my radar for some weeks as he's alongside De Cuyper (who already is really expensive) a player loaned from Club Brugge by Westerlo. He started in the team and managed to score which is the point where I scooped him up for 4.27€ quickly going up in price afterward and now having come back to around 8€. He's 21 so plenty of years ahead of him. I also picked up 2 copies of Dewaele who currently is injured for 0.75€ each as I'm lacking defenders and don't mind the wait. I looked it up afterward and he's injured for a longer period than I anticipated (end of season). Regardless with these cheap cards it's hard to get crushed opposed to paying 100€+ for a player which is much more risky. 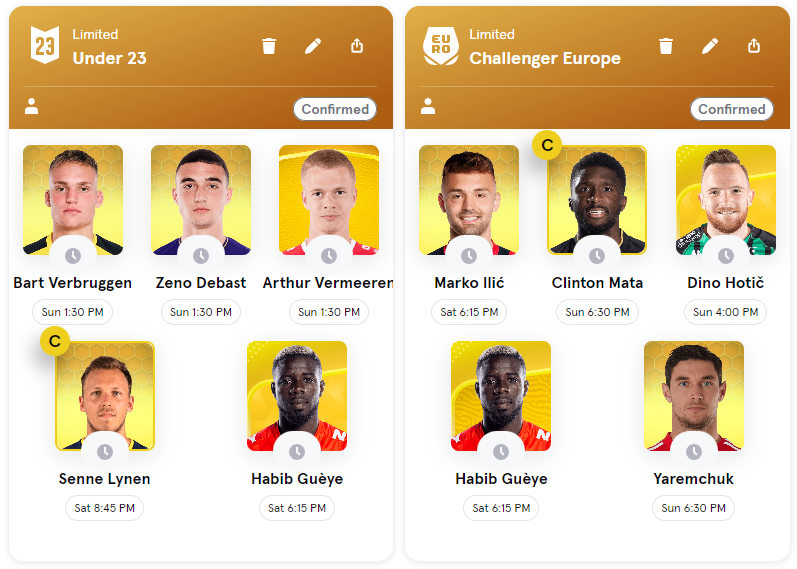 I once again expect most of my Under 23 team with Gueye being the biggest liability and he will need to play and score in order to get good points. My Europe Challenger team right now just isn't competitive at all and I'm looking to buy some more players for that.

I'm doing the recalculation every month or so as it takes quite some time manually now that I start to own more players.

Sorare so far has really provided an extra factor to the Belgian football season which I'm closely following. I'm still in the hunt for getting to a point where my card collection is worth more than I paid for it and likely will put some more funds in along the way to grow before I actually start taking some out. Those that are Football fans looking to test their skills, feel free to use my Link to sign up as that will give you a free limited card after having collected your first 5 cards to form a team.

Crypto & Blockchain-Based Bookies and Exchanges that I'm personally using as they allow anonymous betting with no KYC or personal restrictions...

I have read your articles for a long time, since the beginning of Splinterlands....

Glad to hear you are on Sorare, I too am trying not to get too involved or spend too much on cards, although I am on Sorare NBA🏀🏀🏀

Thanks for sharing your knowledge

Good Luck, it is easy to get carried away and start playing the pay2win game. Somewhat avoiding that in the long term should yield some good returns.