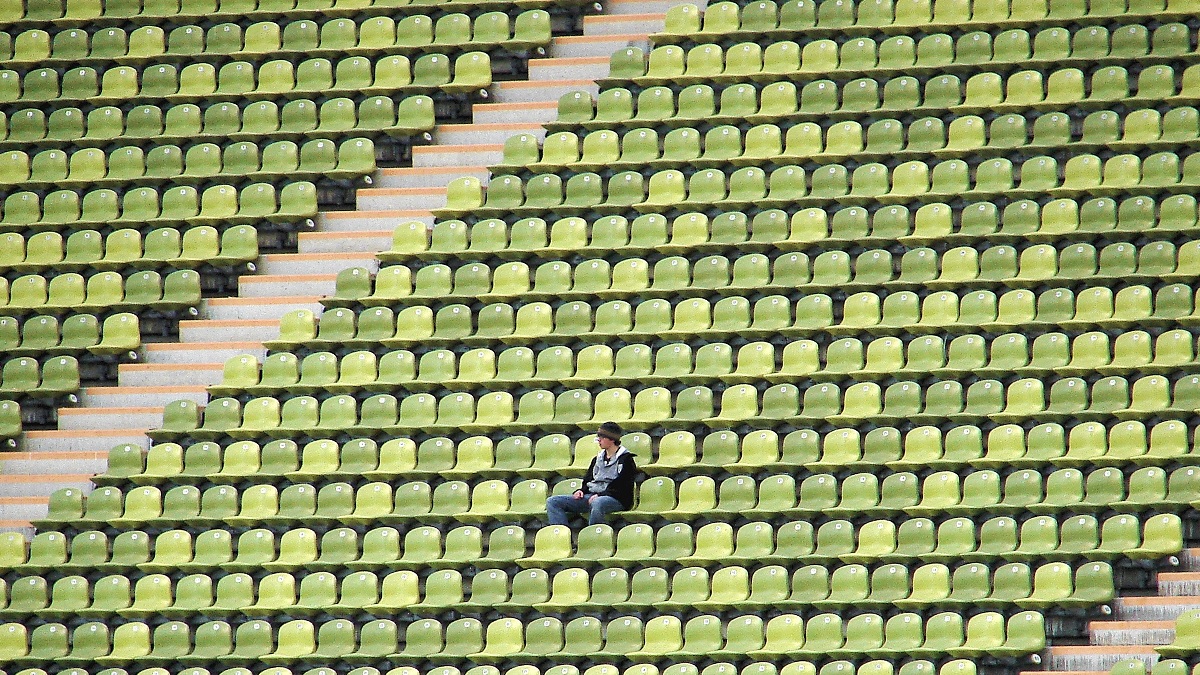 Small 0.15 unit loss yesterday in the match backing Club Brugge at the moment they turned their engine up at the start of the 2nd half which quickly made them take the lead after. Unfortunately, they once again turned it down while Mechelen at home played with more conviction getting back in the match taking the late win. Hopefully better in the 4 matches that will be played today 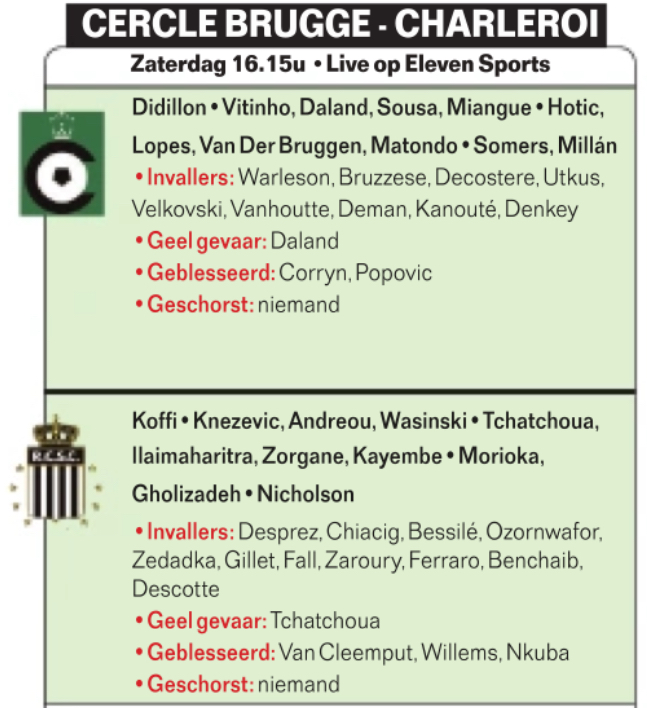 Cercle Brugge continues to show a pattern where they are playing quite well yet they fail to win their matches in the end. This was again the case away against Genk where they didn't crawl back and just were the better team. They deserved more than the draw but failed to finish in in dangerous counters that they got showing some signs of fatigue late in the match to see the 1-1 being scored by Genk. Cercle is also the -0.25 favorite today despite their bad results against Charleroi who are currently in 5th position. Charleroi started the match anticipating on the counters and they were unable to really switch this around after they got behind and that match turned into a 4-0 Punishment. I do expect Cercle to be the team taking the initiative with a lot of enthusiasm and drive at the start and the bet I'm leaning most toward is Cercle 1H on the corners. If the odds are good enough I might take some on that. For now if feels like everything is set properly. No Pre-Game Bets 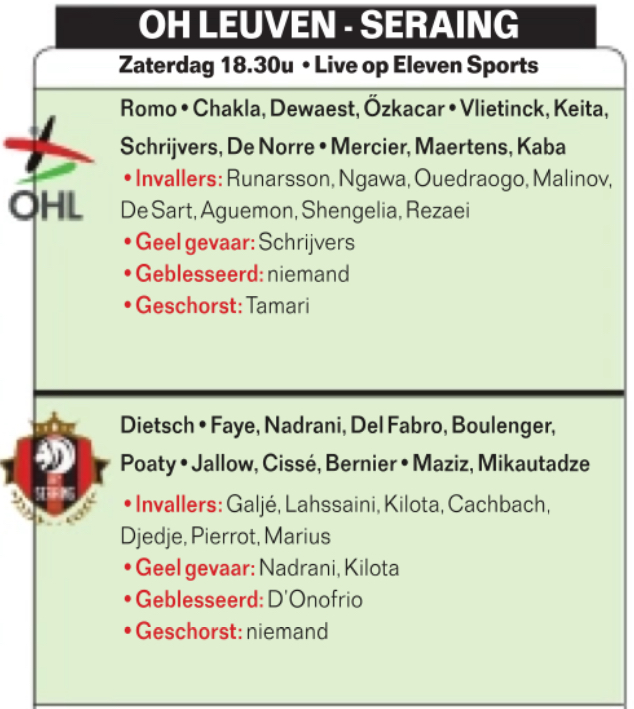 OHL has been playing ok lately and they started winning again as they now have a scoring striker in Sory Kaba. They also tend to have matches that don't look that open but still often end in a ton of goals. Seraing had a good start of the season but are now being put back with their feet on the ground taking 3 losses and a draw in the last 4. Especially the 3-0 loss against direct opponent Beerschot was a big blow. Especially away from home, they tend to struggle as they went 1.5W-5L-0.5P against the Asian handicap. The big question is if OHL -0.75 is too soft of a handicap or not. Seeing how Leuven so far this season has yet to win a 1st half at home, I'm waiting this one out for potential a better in-game entry. No Pre-Game Bets 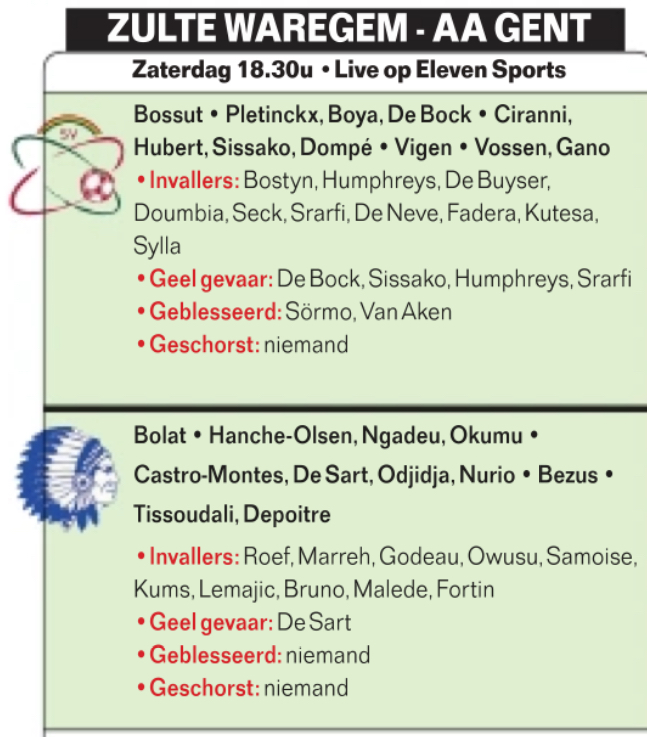 AA Gent is currently catching up after a poor start of the season and have picked up their form even though the last match against Seraing who mostly defended was not good enough. The market also has fully caught up to the narrative where Gent puts in a good streak with them being the -1.25 favorite today. Zulte-Waregem remains a mixed bag at times putting up a decent performance while on other occasions being nowhere especially at home againt bigger teams (2-6 vs Genk / 0-4 vs Club Brugge). In this match I'm unable to trust the home team but also not willing to back Gent at the big -1.25 handicap even though if it's one of those matches they could easily cover it. Zulte-Waregem has a record average of 3.43 goals in their 2nd havles at home which might be something to look out for. I'm sitting this one out for now, No Pre-Game Bets 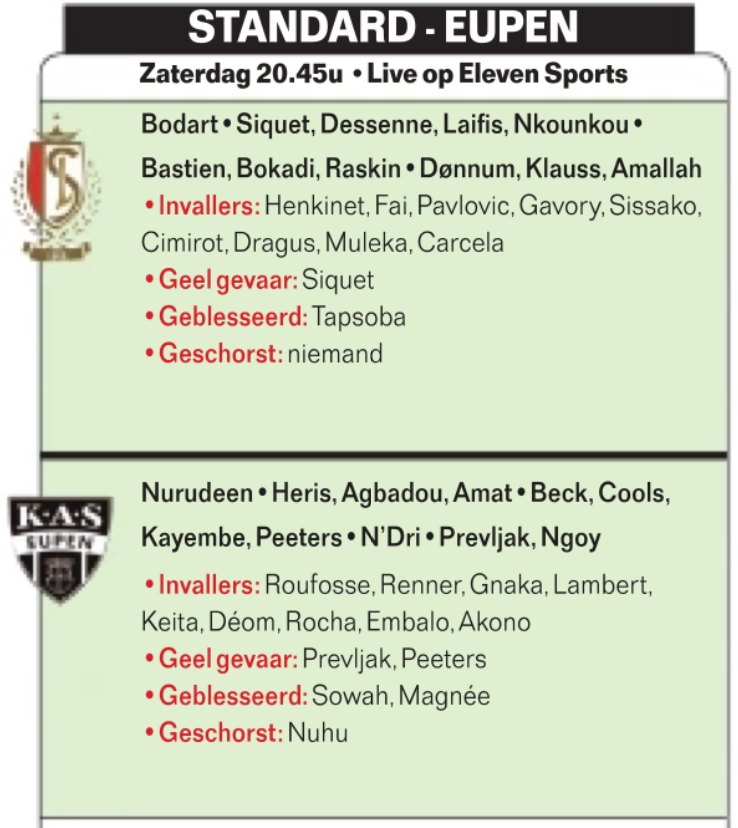 Standard took a surprise 2-2 draw away against Club Brugge mostly because of the combination of them putting in a lot of work while Club Brugge once again Underperformed. Overall the quality hasn't been there yet for Standard though and their drive is what they have to count on which will be amplified by the home support today. Eupen is a team that is currently in some regression to the mean after overperforming at the start of the season. This is another match where I'm just now seeing any edge so I'm just waiting for an in-game opportunity. Both teams do have a high 2H goal ratio (73.7% & 70.8%) which I will look out for. No Pre-Game Bets

Late info might change my view on what is written in these previews. I will cover these matches live in our SBC Discord Channel. All my bigger pre-game & Live bets can automatically be followed on Copytip.

I take all my Pre-Game & Live bets with my Betting Broker Sportmarket Pro who always provide the best offers on the market with a 1 click solution and don't limit winning players offering high limits. For more info check my Sportmarket Pro Review
Pre-Game Preview Bets I share many of my pre-game bets in all my preview posts as bold selections which are all counted as 1 unit flat bets. See these just as info and not as actual betting advice. Last season I had 236 of these selections which went +13.96% ROI (See Post). So far this season I had 83 bets which unfortunately so far saw a -3.65% ROI. Overall on the season all 616 bets combined I'm at +4.34% ROI

Full Guides to Decentralized Crypto Bookies I personally use where no KYC is required allowing anonymous betting from any location without individual limits for winning players...