Today I wanted to appreciate farms for the second day in a row! It's not a garden per se... This post was started a few weeks ago but I think it's been more relevant now than it ever has been in light of recent events around the world.

There is a concerted effort to destroy the food supply, not trying to be an alarmist or to sound crazy but if you've been seeing what's been happening to the Dutch farmers you've got an idea of what the crazy assholes that are controlling governments are trying to do: destroy the food supply around the world. Ukraine has significant food exports for the globe, as does the food that the Dutch farmers grow and cultivate. Canada may be next on the list from something I read the other day. The time couldn't be better to get ourselves into small, sustenance farming/gardening if we don't have access to a larger farm nearby!

One of the things that we started to do ourselves, since we are in the process of trying to move this year (unlike last year!) and don't want to get an extensive garden going on the deck in case we have to drop everything next week for a new house, is make sure that we buy directly from the farmers in as many ways as we can. One of the programs that's incredibly popular in America is called Community Shared Agriculture or Community Supported Agriculture. What the CSA program is is you can give the farm some money at the beginning or before their season starts and you are able to help offset or eliminate the loans that the farms need to take in order to operate their business. In return you are given a box of food that you pick up every so often. It's usually once a week on a specific day but other times it can be twice a week or you can choose when to get it. The point here though is that there are significant benefits in so many ways to do this! Grocery stores are convenient that's for sure however we've lost a lot of the ability to remember and understand what foods are actually in season around us! The best foods are the ones that are farm fresh and the only travel that they do is from the field to the store. A lot of the foods from around the world are traveling hundreds or thousands of miles to get to where they will ultimate be sold. There isn't anything wrong with this that's for sure, since that promotes trade and an economy in itself however the food goes through some crazy stuff in that time! It's also almost always radiated to oblivion to kill bad bacteria or viruses which sounds good, considering the travel time it has to do but it also destroys the foods nutrients!

We are incredibly lucky that we've got a significant number of farms near us, numbering probably in the hundreds if we count the small ones that are mainly someone's backyard that they are growing lots of things to put out for sale. That's the best part about living in a lot of the countries in the world where there is land for people to use and gets decent rainfall. The ability to grow our own food is so important! I know this isn't exactly a garden post but it came out of a massive garden from a farm! Lol The delicious things that we get every week we are learning to be very thankful for and prepare meals, freeze what we can and eat and enjoy the delicious things that are in season. We've gotten into a pretty good habit of keeping as much as we can from the summer harvests so that we can enjoy them later in the fall and throughout the winter! Last year we picked so many blueberries that we were able to eat them all the way up until late spring. Score!

(Despite all that love for local, in-season foods, I still highly dislike beets! LOL we always give the beets away! :D)

Eventually when we get our own piece of land, however big or small it is (hoping for an acre, but don't know if that's possible! lol) we will certainly be getting a small farm going, with animals and plants galore! In the meantime, I'm enjoying the fresh foods we are getting from our different CSA's and the herbs that I'm growing on the deck. Anything we can do to keep fresh stuff in the house!

Those berries look exceptionally fresh and luscious. It's almost difficult for me to find fresh berries. There are only frozen and it's also imported. So berries is something I rarely eat but get to see from the screen and people stories on hive 😅

Ah the berries are delicious! I'm slightly surprised that in a country like Indonesia they don't grow these types of berries. The weather is great for them to grow all year round! With you traveling around though, it's too difficult to have something of your own to grow and keep track of.

The berries are definitely good frozen as well! I enjoy raspberries but I actually prefer them frozen so most of the time when we get them, we wash them and toss them right in the freezer! lol.

Hopefully one day you get to try lots of these fresh berries! :D

Thanks man! The CSA programs around here are incredible. The last few years we've saved thousands of dollars from not going to the grocery store. I can only imagine with the increase in food prices this year how much we will save. We still go to the store for the necessities like beans, bread and stuff but having the veggies, eggs and fruits taken care of by the farm is such a massive help!

My wife started gardening this summer. It's been great. Not nearly enough to feed us of course, but she's learned so much, we can do a lot better next year, and the year after, and...

I think for me, the TWO BIGGEST ADVANTAGES of CSA'?

110% agree with you on that! I love giving money directly to the farmers, cuts out the middle men. We even try to do cash as much as we can, though it's not always possible. The less fees the better for them!

Food is by far fresher! It's also not radiated which is incredible, lots of the natural probiotics and stuff that's supposed to be in the food is still there!

I don't like to get into tin-foil hat kinda of debate, but it can't be 'natural' that the same movement is happening in several countries at once. There must be an elite pushing the narratives along with governments and the media to absolutely devastate farmers (especially small farmers). The result? Huge farming corporations will buy cheap land from bankrupt farmers. We can never forget that Bill Gates is a huge land owner -- gotta listen to what kind of narratives he's regurgitating.

Absolutely man! It's a load of horse shit, and not even the good stuff that you can use for fertilizer! Lol. It's fucked up what these assholes are trying to do to the food supply. Sadly the next victim on the chopping block, literally and figuratively, is meat. Beef is going to skyrocket in prices, I've watched some clips from some farmers that have said feed prices haven't been factored into their cattle prices yet but will be next year. I'm definitely going to be getting into having a small multipurpose bit of land with a couple chickens and some other stuff to offset. The best thing we can do is grow and harvest our own foods when we can! I really enjoy and appreciate buying all of this food from the farms directly and will do this as long as I can but one thing I know I need to do on my own is raise some animals and get into husbandry to help keep my family fed with healthy stuff!

Yup, a chicken coop isn't difficult to maintain and generates food year long. I believe prices are going to skyrocket here soon... 80% of the fertilizer comes from abroad, being 23% from Russia/Ukraine and there's still morons criticizing our leaders for being neutral. For Christ sake, if we take a side we're f***

Next crisis is with China, it's gonna be brutal for the supply chain.

Is this coincidence becoming a thing? I just saw a tweet about how Africa suffers from food shortage because of the war in Ukraine when it’s much much bigger than Ukraine. This is one of the reasons I want the #operationfeedyourself to come back into play. 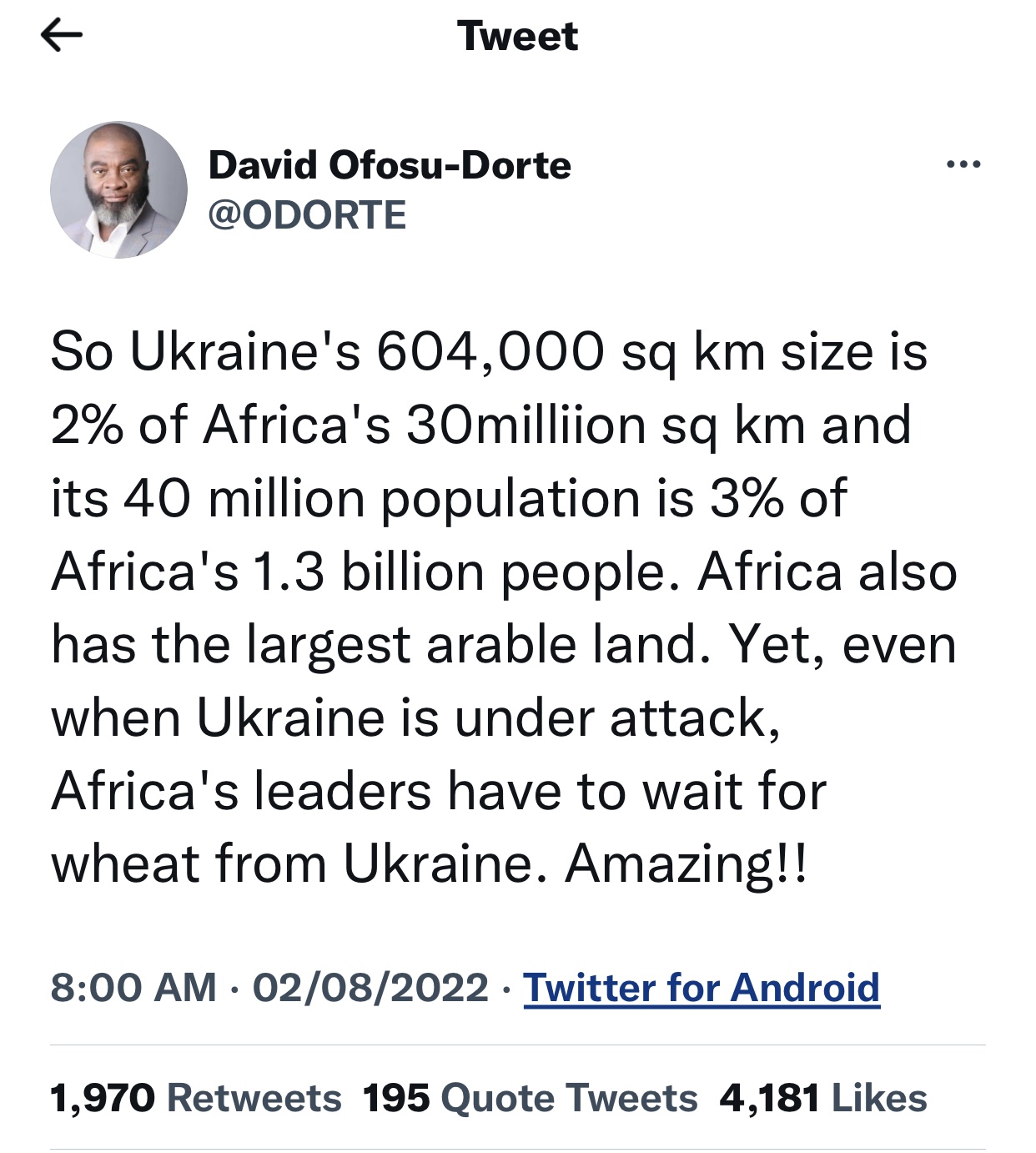 For some reason Ecency won’t let me upload the screenshot. I uploaded it from the hive.blog front end.

Yeah there is a lot of manipulation going on right now.. It annoys me that Africa, such a beautiful and potential environment, is being intentionally kept from the potential it has for supplying the world with significant amounts of food. There is so much potential for many of the large continents for supplying everything we need! If you really think about it, this whole "overpopulation" shit is stupid as hell! We are barely farming a large portion of the land in places like Africa, America and other regions of the world but people will try to say we can't support it. It's ludicrous. I'm not saying we go and double our population from where it's at right now but we should be able to increase the population without any issues.

Thanks! The food is definitely delicious, we love getting it! Fresh fruit is amazing!

Hahah well you can't go wrong with farming that's for sure! I don't know how offensive Hawaii is to farmers, hopefully it doesn't end up like the poor Dutch farmers where they cut all kinds of shit on them forcibly but farming is one of the most important things we can have right now! One of the best things we can do is support the local businesses and farmers, those are the most important groups of people in economies, not the Walmart's of the world!