Hodlnaut Finally Throws In The Towel

@chekohler 76
about 2 months ago
LeoFinance

It looks like the moon is pretty far away these days with shitcoins crashing down to earth after tethering themselves to bitcoin and taking on way too much leverage. Upon the blow-up of Luna which clearly underpinned a lot of retail and institutional hopes and dreams the bodies have been emerging. BlockFi, Celsius, Voyager, Babel Finance, and the list goes on.

Every lender in the business is trying to buy their time slowly trying to plug holes in their balance sheet but eventually, they have to face reality. Some will make it out with bailouts or clever accounting trickery but one that wasn't so lucky is Hodlnaut.

Th Singapore-based soycoin and crapto currency lender and borrower, has suspended withdrawals, swaps and deposits, the company said on Monday on Twitter and via other media channels much to the dismay of its client base. 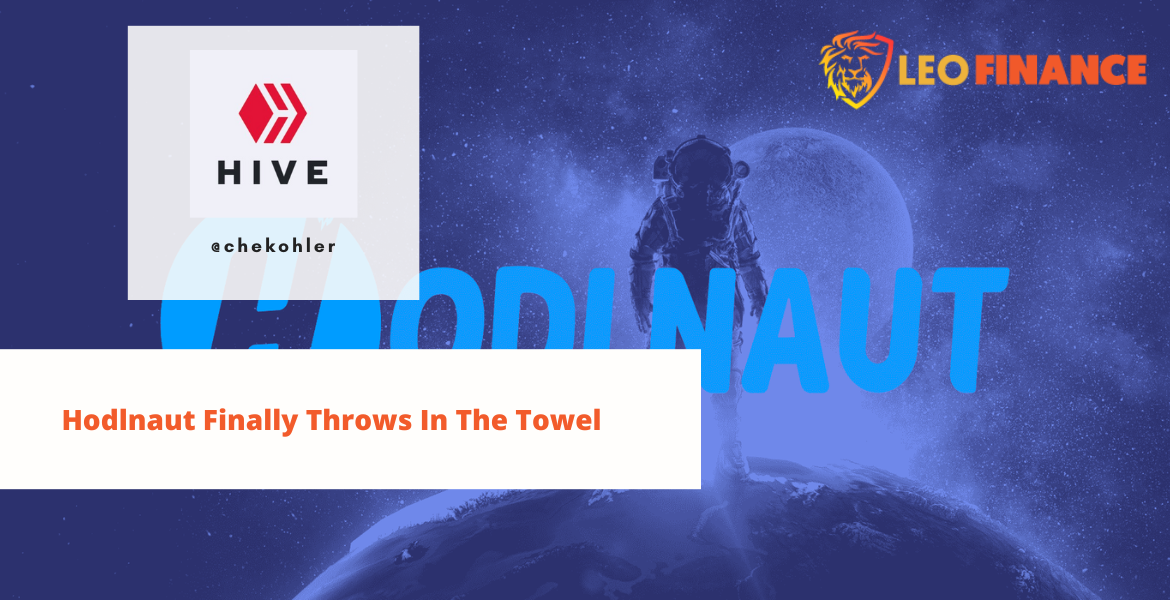 Hodlnaut said the move was

"due to recent market conditions" and was "to focus on stabilising our liquidity and preserving assets".

Which is code for we commingled all your assets into a basket and then YOLO'd them into DEFI directly or via firms like 3AC and we simply cannot meet the redemptions of our clients.

Hodlnaut was named as one of Celsius' institutional clients, according to court filings and it looks like the company declaring bankruptcy is going to have some widespread effects.

According to their statement the company is consulting with Damodara Ong LLC on the feasibility and timelines of our intended execution plan. Which is code for we're seeing which creditors we can get into the least amount of trouble not paying back or partially paying back, while we try to raise a deal either with more debt or diluting our current equity holders.

Hodlnaut's one saving grace seems that it was able to avoid any 3AC exposure, but some reports claimed that the firm was not transparent regarding its investments in Terra's now defunct algorithmic stablecoin UST.

A report published by Twitter handle Fatman in June pointed toward the large exposure of Hodlnaut during the stablecoin’s depeg and how they misrepresented their position:

This is what the company had to do to try and subsidize the 7.5% APR it was promising clients, it needed to take on risk that was not properly hedged or compensated and now the depositor. are going to have to eat the losses

If you want to delete your hodlnaut account it might be too late and time to learn a good lesson.

Some people have to learn the hard way, that the essence of crypto is to NOT rely on third party insitutions.

Ofcourse, moving to on chain where you can directly broadcast to the blockchain is better, always has always will be but what about all the trust assumptions on other chains

If that's true then ALL shitcoiners aren't practicing what they preach, how many are

You can earn passive income by delegation of tribe tokens to "The Cartel"!

Click the banner to join "The Cartel" Discord server to know more!

It is crazy how many exchanges and centralized platforms go down overtime. A lot of new players in the space suddenly think these platforms are how you interact with crypto and then get burned hard not knowing there are a 1000 previous platforms that came before that imploded. Then if you try to tell new people to keep funds on a hardware wallet or something they look at you like you have 3 heads.

Lol they all think bitcoin and shitcoins are some kind of tech stock and don't realise these platforms only sell these things because they can play in a gray market and get away with shit and take stupid levels of risk, playing the regulation arbitrage game

I've tried to teach people about it, they won't listen so they must fucking get rekt and HFSP