#Interactions with our fellow humans

can be surprising, rewarding, fulfilling, and utterly fraudulent.

"What you see is what you get" is all too often not the case.

People in positions of power, and popular people full of charm and charisma, may leave us favorably impressed as we interact with them. I've fallen for it too many times. Midwesterners tend to be a more trusting. We keep forgetting the great lesson of The Wizard of Oz: 'Pay no attention to that man behind the curtain" is one of the most epic lines (and images) from all movies, ever. This is a five-minute freewrite so I get to write write write without organizing first. (Later, I'll come back with hyperlinks and line edits.) So, here I go!

Years ago, my journals filled up with so many newspaper and magazine clippings, I stopped saving items of interest to me. Now I wish I'd kept it up. I didn't clip and save book reviews on The Prisoner in His Palace: Saddam Hussein, His American Guards, and What History Leaves Unsaid by Will Bardenwerper.

.... this remarkably insightful and surprisingly intimate portrait of Saddam Hussein lifts away the top layer of a dictator’s evil and finds complexity beneath as it invites us to take a journey with twelve young American soldiers in the summer of 2006... It becomes their job to guard the country’s notorious leader in the months leading to his execution.

.... Although the young soldiers’ increasingly intimate conversations with the once-feared dictator never lead them to doubt his responsibility for unspeakable crimes, the men do discover surprising new layers to his psyche that run counter to the media’s portrayal of him.

The young Americans guarding Hussein may have seemed naive as they chatted and played cards with this quintessentially evil villain, but there may be something more profound and wise going on with them. They, we, can see good in people, even in the worst people, even in the most heinous dictators. (Hussein's sons were known for feeding soccer players into a shredder.) The most evil people on earth may somehow manage to manifest human decency, and so many of them (Hitler, e.g.) had loyal dogs who loved them.

It isn't just the obvious villains we must beware.

Interacting with "ordinary" people every day, we have no idea what goes on behind the four walls of whatever room they call home. More than one family from my hometown has hidden horrific tales of child abuse, even rape and incest by fathers and brothers, and mothers who said "You only dreamed that," and grandmas who'd tell a child whose father raped her, "Least said, soonest mended."

Yes. People were like that back in "the good old days" when life was simple and innocent. Because honest interactions were stifled. Suppressed. Not everyone, not everywhere, but "transparency" is more of a "today" thing. Thank God we've pulled back the curtain and started to expose the hidden sins.

All too recently (in my own lifetime), even if a child should recognize "This is not normal," her judgment would come into question, and she was told to Put Up and Shut Up. So much for sending out into the world strong people with good intuition and a sense of how to protect oneself from harm and abuse. To learn of a classmate or a neighbor who suffered horrific abuse while our parents conducted normal, civil interactions, at church, at school, and all this evil lay hidden in plain sight: it's something I struggle with daily, yearly, all across a lifetime. How do the wolves in sheep skin keep up this good front if they are really child molestors or cheats, thieves, abusers, liars, frauds?

My September 11 clippings continue to perplex and haunt me: 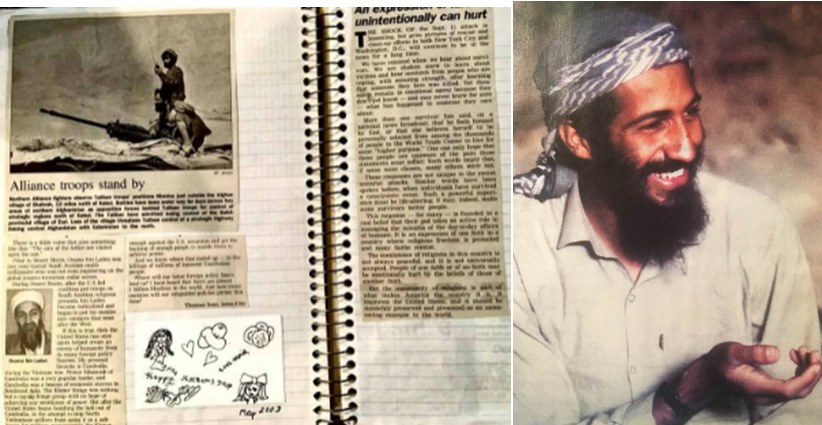 I've yet to find the smiling Osama image online (I think I clipped it from Time or Newsweek). It's glued into my cheap spiral notebook. (Yes, a drawing by my daughter is tucked into a conveniently sized blank space.) On the next page I included that terrible thing some people say on surviving a disaster: God must have some "higher purpose" for me that I lived while others perished beside me. Yeah. That one. For more than half a century I've been trying to sift through conventional wisdom, tradition, authority, instinct, personal observation, and what we can learn from others.

Interactions. Stupidly, I posted something on social media, and immediately got labeled "stupid" for comparing the ethnic look of Jesus with Middle Easterners.

"Horrible comparison and bad taste to compare him in any sense, to O. Laden." 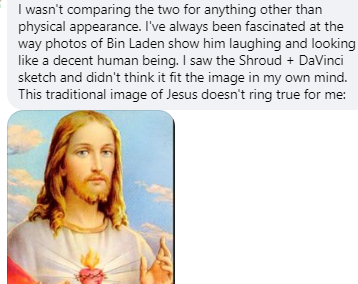 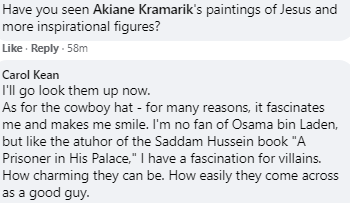 My spinster aunt didn't keep a journal or a book: she used to jot down quotable quotes on scratch paper and in old pocket-sized calendars, e.g., "If someone doesn't like you, it's their problem, not yours." Or the epic "Bad, foggy day" commentary: 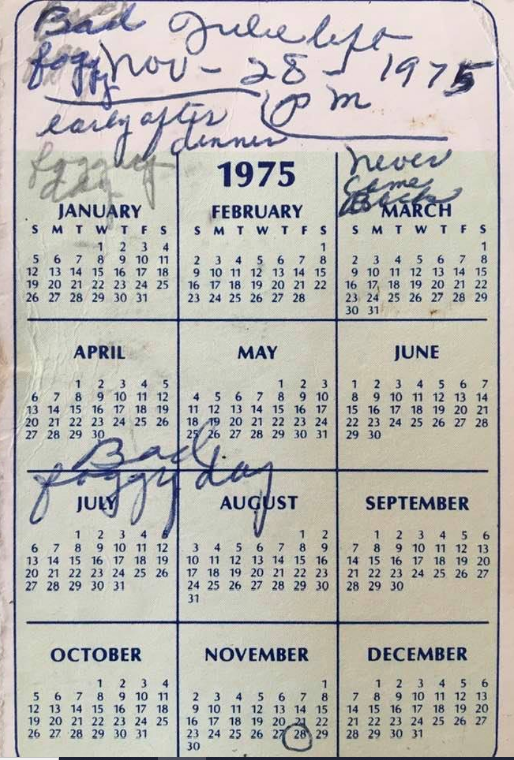 “Bad fog. Julie left early after dinner. Never came back." Ink over pencil as she kept revisiting this themes. "Bad day. Bad fog. Bad foggy day." A haunting, haiku-like rhythm to this, from a stoic who kept her deepest hurts buried deep.

I miss you, Aunt Malita, and wish I'd figured out how to get to know you in real time.....youth is wasted on the young, and I was obtuse and oblivious and self-absorbed while you were still with us. (Sins of omission, often worse than sins of commission, I always say. ) You didn't live long enough for me to acquire the wisdom to really interact with you on a more personal level.

In short, our interactions with fellow humans can hide the evil lurking in the worst of us, or illuminate the best in all of us.

FIVE MINUTES CAME AND WENT a long time ago.
Now I should organize, "flesh out," develop, polish, and publish something more coherent and relevant on our INTERACTIONS with others and how we come across and how many of us are deceived and so on and on and on and on,.

Thank you @mariannewest for the daily prompts!

Found her "if someone doesn't like you, it's their problem" quote - she wrote it twice! - must have been trying hard to internalize that one. Oh Malita. 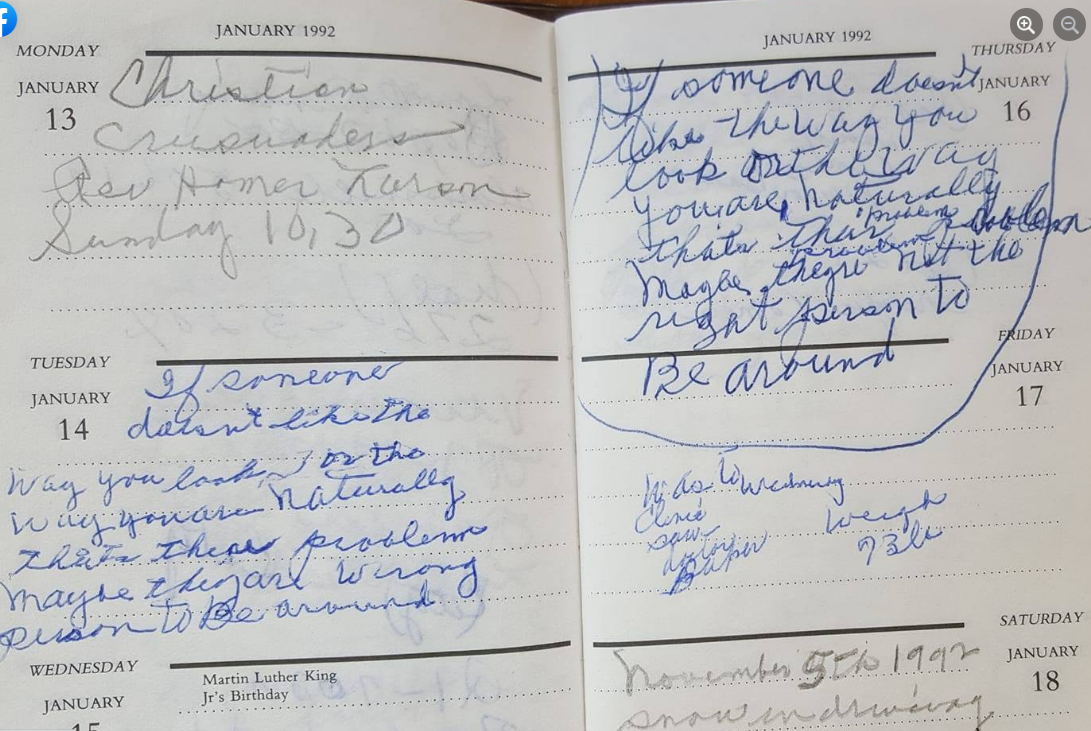 Human interaction is always layered as you said @carolkean, and it should not be too surprising to see even the most despicable dictators being charmful, after all they had to become dictators before they could rule, and great conclusion in your comment, thanks for sharing and stay awesome.

This post is AWESOME!
It will therefore be highlighted in our daily Curated Collections posting for today.
The goal of this project is to "highlight Awesome Content, and growing the Hive ecosystem by rewarding it".

Thank you!!! For the upvote, the curation of content, and for reading and commenting. YOU are awesome, @flaxz!!

You shouldn't do anything. It's perfect. I've seen that page from your aunt's calendar before, so haunting!

Thanks @owasco. As "interactions" go, little scraps like that calendar are all I have left of my aunt. If she had kept a journal.... what a treasure! (If anyone could decipher her handwriting.) That credit-card sized calendar does haunt me. The emotions spilling onto it - I can't even articulate this - her need to express the horror and loss in some "safe" way. I wish I'd gotten to know her better. Some people are so hard to "crack open" their shells and see what's inside....beneath the spiked armor plating...

We are all scarred. This perplexes me. It seems to me that health and happiness should be the norm, and disease and sadness the exceptions. I can see keeping this item forever, until no one living remembers Julie and the trauma your family went through.

There are so many people I wish I'd gotten to know better! Now that I live in my aunt's house, I realize how little I knew her. I know this much now - SHE LOVED CHRISTMAS. The basement is stuffed with Christmas decorations. Nice ones! I'm keeping some of them, and trying to rehome the others. Want some?

Oh your aunt who loved Christmas - what a gift, that you can get to know her better now, all these years later ("too late") - I hope her beloved Christmas decor can find a home with other family members who knew her and loved her.

And the other aunt, she of the lake, the spinster, the childless one. What is left of her, the leftovers of a lifetime, what can be held dear and treasured now, and what must you all "let go" of.... you have such a talent for seeing the sacred in the "profane" (the mundane), as some critic said of a Rubian Nakian exhibition, and I am not going to google this right now, so help me God, I"m not....

I got my Aunt Jane's cat, and her canner. Two essentials. She had little else.

As for this aunt, apparently the massive number of Xmas decorations still in the basement has already been picked over by the family. I'm told they took a lot. There seemed to be a ridiculous amount here, but I've finally figured out that the bulk of it is large dried, or plastic, flower arrangements. I think she must have made a new one every single year, then put it in the basement and forgotten about it. My rule now is "if it smells bad and/or things start falling off of it, it is garbage."

There's a lot of jewelry here too, also well picked over.

Today, I need to pack up all the silver plate (lol @lizelle) and figure out what to do with it. There will be a large size moving box of the stuff, maybe more.

Boxes of silver.... I got rid of my wedding silver (a tea service, a wedding gift from an aunt, something I never would ask for, knowing it's high maintenance). The stuff turns black so quickly between washings. And I almost never use the stuff. Only a few odd pieces remain. Who wants silver, these days....

The dried florals [[to decorate a Christmas tree ?]sound exactly like the kind of decorating I'd love to do, but instead, I just trot out the same old lights (ok, now replaced with LED lights, but same look). The wreaths, the pine sprigs on the mantle, the blue berries of the juniper. White blossoms, dried to snowflake dots... eh. I'd love to see what you do to the house for Christmas and Thanksgiving, and dream of being able to eat whatever gourmet dinners you'd serve. (Jimmy! I will never stop thinking of you!).... #Silverbloggers, how many of you USE and POLISH silver ....??

Oh honey I don't decorate OR cook for holidays. This started when I owned and ran a take out gourmet and catering service. I had no time to do either, because I was so busy doing both for others. I have kept some of the Xmas decorations, hoping I'll get it together going forward, and some of the stuff is really nice.

I;m sure there are some silver stackers here that can help me figure out if the stuff has value. There's quite a lot of sterling silver, but much more silver plated, which I'm hoping a thrift shop will take off my hands.