Yesterday was a great day for Hive investors. Many people who know very well about Hive booked some decent profits from Hive yesterday. It is a fortune we get on Hive now and then. Though the price of Hive is unpredictable, we all know for a fact that the price of Hive is very good anywhere below 1$. It is one of the undervalued cryptocurrencies in the entire market. Some great dApps try to bring the potential of Hive to light. We still need more investors.

I was thinking that someone who had a fat paycheck decided to purchase a lot of Hive yesterday and pump the price of Hive. Maybe it was Koreans again but I personally feel that this is something that can happen anytime. We have to be ready for massive pumps here and there. But from what happened today, we have to understand that what goes up will always come down. Today Hive had a small fall but the price still looks good. 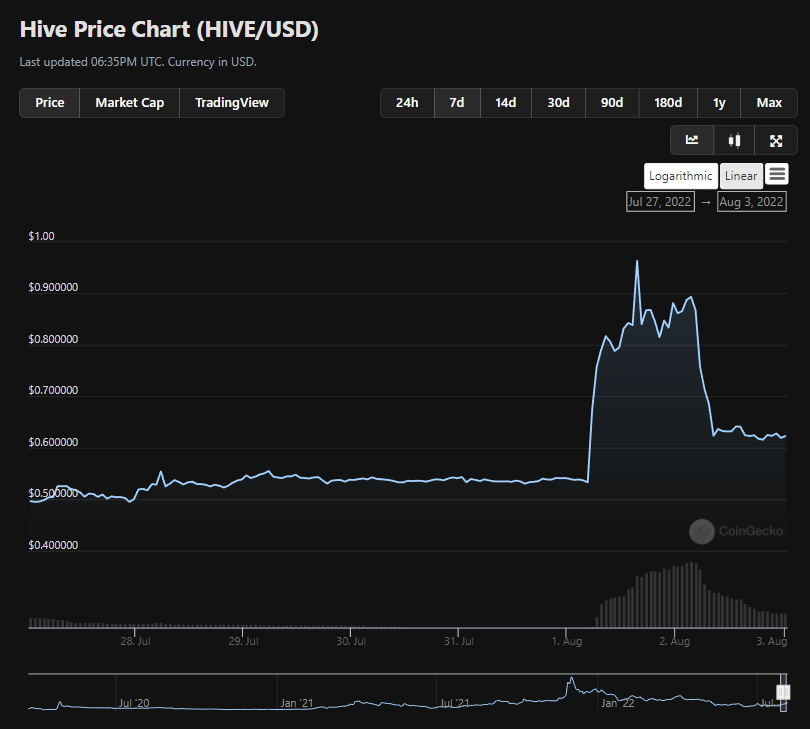 People who had sold their Hive for over 80 cents yesterday would have had a great opportunity to buy more at 60 cents today. 20 cents is a huge amount per hive if the purchased quantity is high. Also for people who bought Hive at 80 cents, it is definitely not a bad deal either. I bought Hive for 90 and 95 cents a few months back before the fall happened. I still believe Hive will soon hit 1 dollar again and I would be able to sell some for profits.

Currently, my focus is on getting my Hive power to 50k before the end of the year. Even though I had many opportunities to sell my Hive, I didn't get hold of the opportunity but I was focused only on powering up. I still think that's a good decision I made and maybe in some years' time we will know the true power of Hive and we will be able to reap some good profits from the same.

There is no other blockchain that gives a decentralized 20% APR for stablecoin investments. DeFi chains talk about more APR but they don't consider the price of their token as the criteria. Some chains and smart contracts even lack decentralization. Considering all these factors I think Hive is definitely decentralized and at the same time, 20% is a great deal for the stablecoin investment. Recently when there was a massive market fall, the price of HBD was very stable and I always saw that above 1$. This is really good and increases the trust of the token holders.

After I reach my goal this time I'm going to hold some liquid Hive for sure to do some swing trades. A few months back I used to do that but later after the price of Hive fell, I stopped doing swing trades. Even now there are opportunities for swing trades. If we really can't do a buy and sell, we can target sell and buy. There is always room for swing trades. We have to pick the right moment and make the right decision. Finally, I wish there is one more massive pump that takes Hive back to 1$ and makes it stay there.

It was the Koreans on Upbit. There was over $800 million in volume during the price spike. Really wish we could figure out what they are doing, but basically they traded the entire market cap of HIVE back and forth almost three times.

Yeah and this is not the first time they are doing it. Upbit is one exchange that bring us a lot of fortune I guess.

You are doing great, congrats.

I swapped all liquid Hive for HBD yesterday. I may swap it back in a day or two 😊

That's nice. I did not have any liquid hive in hand. Waiting a couple of more days is good to convert them back. I think it will again settle at 50 cents.

Nice one.i bought some HBD and waiting for a bit lower before converting to hive again

Sigh those pumps never last but what we do get at least is a new baseline that's almost always higher.

Yay! 🤗
Your content has been boosted with Ecency Points, by @bala41288.
Use Ecency daily to boost your growth on platform!

It was really nice to see the sudden increase in hive which was a sign of progress that the bull market is around the corner. Though we know the price in Crypto is unstable but it is very much advisable to prepare for the bull market when it showcases again.

You can see on Coingecko which markets are involved: @quekery, THE HiQ Smart Bot, has recognized your request. !PIZZA

Delegate [HP to @hiq.hive] or [BEE to @hiq.bee] to support the HiQ Smart Bot and its trails.

Aha nice article bala.
I have seen value of HBD to touch 2.75 and yestarday value of hive at 0.90. It seems very volatile both of the changes occured with in a day and then also it came down it's previous position.I don't know is it good for hive.

You mentioned how we can trade when value goes up. I'll try to get some profit next time.Thanks for the tip.

I should have taken some profits but I didn't really feel like doing so because of HPUD. Next time, I will make sure to swap some out and earn some extra Hive/HBD.