Venari Wavesmith, an excellent choice for newbies or for starting new accounts.

Venari Wavesmith, an excellent choice for newbies or to start new accounts. 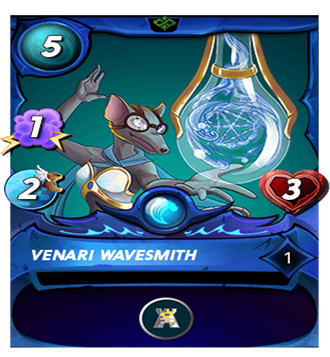 The venari wavesmith is a Water class card that although it has very similar stats to the basic water cards or the neutrals with magic attack with which we started the game, its special ability [Protect] is what makes it so useful, and you see, if something all water or magic attack cards have in common at the beginning is that although they all cost 4 or less mana, they have little life, are very fragile, none of them has more than 3. With the Protect ability of the venari wavesmith we gain 2 armor on all summoned cards.

Before the venari acts [it's looking bad, isn't it]. 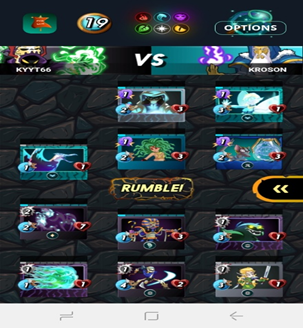 Screenshot from my Cell Phone
After the venari. As you can see things take a different turn, although all my cards have little life, they all have 2 additional armor, and that makes my enemy need many more attacks than I expected, while every turn I put 8 magic damage to his tank card, something that at that level, few tanks can withstand. 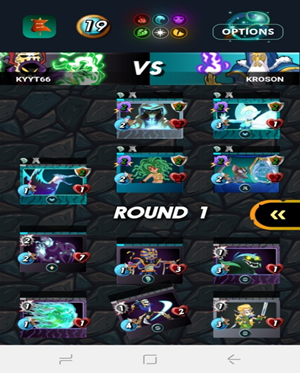 Screenshot from my Cell Phone
Especially if it's in fights without much mana like that... that's how it ended. 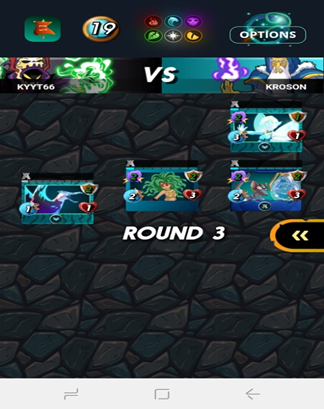 As you can see in round 3 it was already solved and I only lost 1 card. And they didn't even touch my supe tank, which is another advantage of the venari, as the effect is for all cards, anything can help you to tank even if it has little life, because if you put several cards with good attack, the tank doesn't have to hold long because you destroyed the enemy cards before they can do much damage, and yes I know that the previous example is not the best example. Since my opponent's summoner was the least indicated to counter me. But it is not an isolated case. Look at 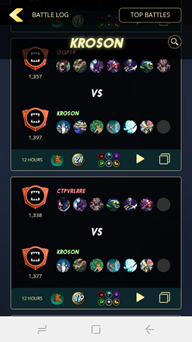 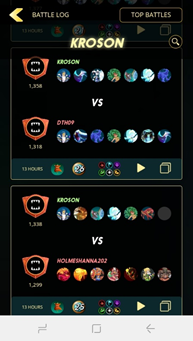 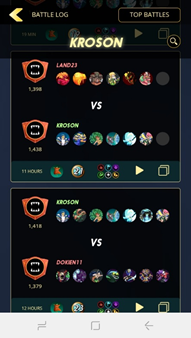 And the list goes on... goes on and on... as you can see the most commonly used cards at low levels are water fire and death... which makes our job easier.

Now then, how to get it and use it.

The venari is a reward Drop, so you can get it in an end of season chest, or daily mission, but if not, you can always do the same as me and rent it, it is cheap, and by far pays its rental cost and gives profit. As of today when I write this, the average price is 0.40 DEC per day ... that is ... 1 victory game in bronze 3. And with a victory in bronze 2 with rented card a victory gives on average 3 DEC. So... to advance a small account it is a good idea...

As for how to use it. Well, you have already seen one of my games but...

basically it's about the same thing, use the Alric strombringer summoner to increase the power of your magic damage cards to double since the basic cards have only 1 damage, the summoner gives them 1 more, so it increases their power a lot percentage wise, and the venari finishes off increasing the resistance of all cards if you have 4 cards are 8 more armor distributed among your cards, and as at that level few combos concentrate the damage in one place, you take advantage of the fact that the armor is distributed among all your cards, EYE very important never put the venari or in the last line, or in the second, much less first ... because when the card dies you lose the buff it gives to the others, in first line it would be the first to die probably, in second line is not very good either because if you use a tank with low life, and they kill it, you can lose the venari and the cascade effect destroys you... and also because the cards with Snipe attack the first card with magic or ranged attack in your formation, if you put the venari in second line it will be the one they attack, and at the end because at that level almost all combos use cards with sneak that could kill your venari. In those positions that I mentioned it is always better to put the cards with more health. And the venari as much in the center of your formation as you can, if there are only 3 cards the venari goes in the middle, if there are 4 the venari would go 3rd and if there are 5 also.

As for the tank. There are several options among the basic cards, one of them is the Albatross... basic water type card... 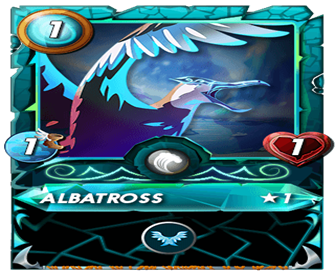 As you saw in the previous game it goes well because sometimes you don't even need a tank, but it can still absorb 2 physical hits, or at least 1 magic assuming that the opponent uses water cards as well, but in case you think the opponent will use water cards I recommend these 2 options.

The Spineback turtle, to which the venari would give 2 additional armor points and with 4 armor and 6 life, is an excellent tank for low levels taking into account that it would cost only 4 mana. 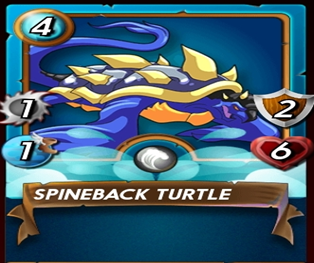 Screenshot from my Cell Phone
Or if you have an idea that the opponent will use heavy physical damage on the front line you can use the Fronzen Soldier also water. 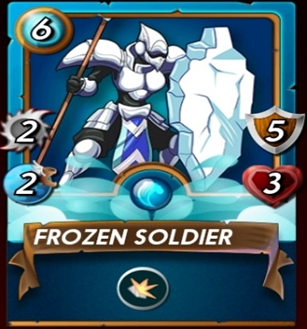 Screenshot from my Cell Phone
But be careful, although it is very good for tanking physical damage, because of the damage reduction it has, if you get attacked with magic damage you're screwed, because it only has 3 health... so you have to use it only when you are sure that the team will use strong physical damage in the first line.

In any case you can still use some other card of your preference... I had a lot of fun renting the Rusty andrioid that is cheap and reflects magic damage, for the moments when I think they will use water cards against me, the Cocatrice is also an option for 2 mana... there are many ways and combinations that can be done with the venari wavesmith in the water clan...

Now ... what I say here applies mostly to those who like me are starting in the game, especially in bronze, from silver onwards the venari alone will not be enough to give you victories, that opponents at those levels have many ways to counter the water cards, and to put good damage in specific parts of your line ... but it does not mean that it is not useful at those levels ...

In conclusion I think the venari wavesmith is a very strong card, and underrated in general, I think that at low levels is quite useful, and that in a way it was needed to make more competitive the water clan at those levels and give more diversity to the game...

I hope you liked my little guide, it's my first time making a guide of anything... if you have suggestions or recommendations please I would be grateful if you could post them in the comments, I hope to improve soon and start making this kind of video content. What do you think, at the end I will leave the links of several games with the venari so you can see how the card works in detail, happy day to all.

You can watch the battle through the following links.