This is The FUD That Never Ends!

Will the crypto FUD ever end? I really don't think so, but it may lose it's effectiveness over time as we grow numb to negative headlines. Crypto has because mainstream enough that both positive and negative headlines are able to grab the attention of many readers. In the content world it's all about clicks and eye balls.

We are in a relatively new phase in the Crypto space where it's now popular enough that mainstream financial publications all have regular crypto columns.

While they may be covering the latest in the crypto space the majority of their readers are more traditional finance types, be in metals, stocks, options etc.

While positive crypto news is able to draw in their minority crypto enthusiast crowd, and possibly bring more traditional folks over to the crypto world, it's the FUD that traditional investors are likely eating up.

If you've been in something traditional your entire life and missed the boat on something new you may be happy to see it fail and read the horror stories.

All those articles that help the old school feel better about themselves, and reaffirming their fears of something new, something different, maybe something they don't fully understand.

FUD Will Lose It's Effectiveness Over Time

While mainstream publications like forbes.com will continue to feast on negative crypto headlines for many years to come, it will gradually lose it's effectiveness as more and more people become educated about crypto, and its fundamentals, and the associated risks.

This won't be forever!

While negative crypto headlines in mainstream publications is likely here to stay forever, it will eventually fade into the background along with all other more traditional negative finance press that makes the rounds.

Money to Be Made in FUD

In the mean time until everyone becomes numb to negative headlines there's money to be made with click grabbing headlines!

This morning I was reading a Forbes article on the BSV 51% attack, and couldn't help but notice the massive amount of FUD headlines even within the FUD piece.

The headline starts off with "Bitcoin Fork Suffers ‘Massive’ 51% Attack In Attempt To ‘Destroy’ The Cryptocurrency, Sending Its Price Sharply Lower".

For the average Forbes reader the post headline might as well have read "Bitcoin under attack, could be destroyed, sending price sharply down."

To say bitcoin fork under attack is sneaky in my opinion, how many traditional financial folks reading these article know that a "fork" is a different version of Bitcoin? How many of these people knew the article was NOT talking about BTC but was actually about a completely separate coin BSV?

Within the article there were links to other articles of course, interlinking is generally a good strat. 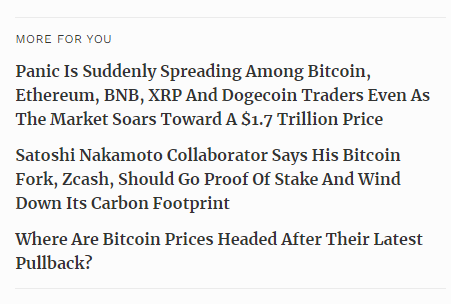 "Panic is spreading" more FUD within the FUD, you get the idea. This publication is feasting on fear uncertainty and doubt, with seemingly no end in sight.

It's just something everyone will have to get used to seeing as long as there's money to made in negative crypto headlines, which will be for many many years to come I would imagine.

For these people, FUD is the gift that keeps on giving.

It must have been this way with other "new" technologies (telegraph, ticker tape, punch cards, WWW, smartphones, ...), but for some reason it seems to be a defining characteristic of cryptocurrency markets.

100% mate! Maybe because crypto is/will be that revolutionary!

It’s just noise. Soon people won’t care because they will making so much money on the blockchain.

Lots and lots of noise! Agreed, I have to imagine that this noise will eventually be tuned out, but give it another few years.. perhaps one more full marco cycle..

My favorite thing is when they turn positives into FUD!

Right? How messed up is that.. I guess sometimes they just need to get that "I told you so" jab in there somewhere.